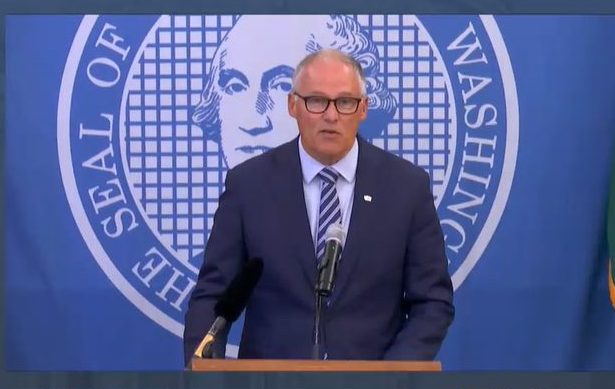 As of this morning, Washington State is at a 67.8% vaccination rate — a stone’s throw from the 70% bar set for reopening of the state. At a press conference on Thursday, Gov. Jay Inslee said Washington may be able to open sooner than June 30 if the state reaches its vaccination goals ahead of schedule.

Washington State set to reopen on or before June 30th

Inslee says in order to hit the 70% vaccination mark, about 130,000 more Washingtonians need to receive their first dose of the COVID-19 vaccination.

Inslee is confident Washington will reach 70% by June 30.

“I just can’t foresee not opening on June 30. And the reason is we continue to have a decline in numbers, at this moment, of infections, and a decline of hospitalizations at this moment and that has been consistent for the last several weeks. So I can see no foreseeable event that would lead us not to open on June 30, or again, earlier if we hit the 70% mark.”

Incentive Programs having a positive benefit

Inslee says the incentive program launched on June 3rd seems to be having a positive impact on vaccination rates in Washington State.

“We had been experiencing a very, very rapid decline in our vaccination rate. We essentially had fallen off a cliff in the previous two weeks — almost a 50% reduction each week. We have arrested that decline”

To expand upon the incentives offered and to further encourage vaccinations, Inslee announced the “Hero’s Thanks” program which will extend the incentive program to Washington’s veterans and active duty service members.

The program will announce winners once a week for three weeks starting on July 30th. Each week, a veteran or active duty service member will receive an award of $100,000 in the first two weeks and a grand prize of $250,000 cash in the third and final week of the drawing.

Inslee did ask that those members on active duty submit their names for eligibility in the drawing, as the Department of Defense would not release those names to the state.

As a part of the press conference, Inslee and Insurance Commissioner Mike Kreidler announced a new executive order that will allow medical providers to bill insurance companies for proactively reaching out to their patients to talk about the vaccine, the efficacy rates, the safety and how it can help save lives.

Inslee had this to say:

“We think that this can put to work a very powerful force in our state which is our physicians who we listen to on a daily basis, in our most intimate health decisions. We want to make sure that they can proactively do outreach to go out and contact, to call, to talk to their patients about why it makes sense to get this vaccine and just to share the basic scientific data.”

Inslee says this is important because a lot of Washingtonians have “been exposed to deception and outright falsehoods that have given them undue concerns about the vaccine.”

“I can tell you firsthand that working in a primary care clinic, those providers can play a very key role here in helping to reassure people who might have reluctance for whatever particular reason that might be. They can ask questions and get answers and I think the trust factor is something we need to encourage.”