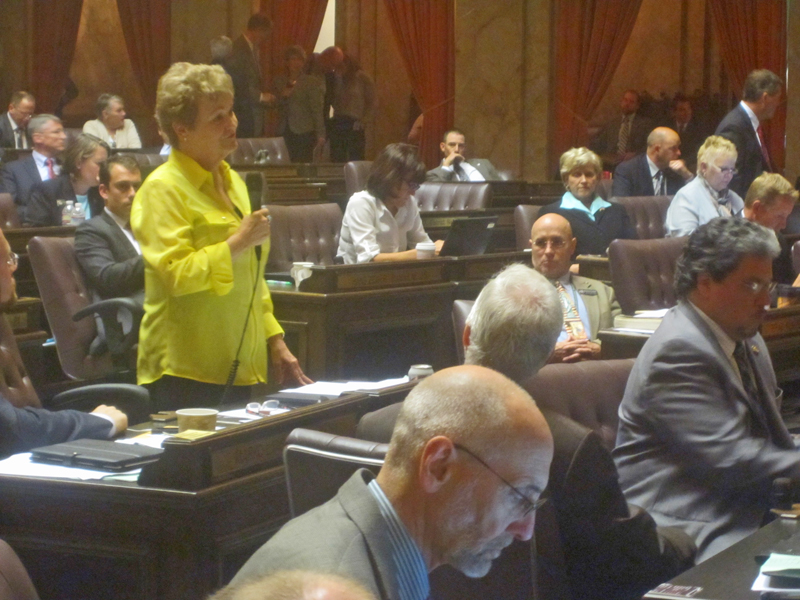 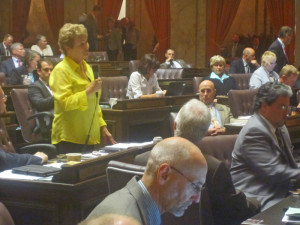 OLYMPIA, June 27.—Less than 24 hours after a long-awaited transportation tax package suffered a dramatic defeat in the state House, advocates managed to pick up two votes and send it sailing on to the Senate. But House Bill 1954 didn’t clear the bar by much. The vote was by one of the slimmest margins possible, 51-41, and it demonstrated that the $10 billion transportation plan is in deep trouble during what may be the waning hours of the 2013 session.

Changing their votes were state Rep. Brian Blake, D-Aberdeen, and Kevin Van De Wege, D-Sequim. Also changing his vote, at least in an official sense, was state Rep. Marko Liias, D-Mukilteo, who voted against the measure Wednesday as part of a complicated parliamentary maneuver designed to bring the bill back to life. The measure was rejected Wednesday on a highly unusual vote of 48-42 — it takes 50 votes to pass the House. Rarely does a measure fail, because votes normally are counted in advance, and the majority party generally does not allow a vote on a measure that lacks support.

But the two-vote shift that saved the bill probably should not be taken as a sudden and resounding expression of confidence. Prospects appear dim for the tax increase in the Senate, where the measure may not even receive a vote. For one thing, there is a political problem. Members of the Republican-leaning Majority Coalition Caucus say they won’t consider the measure unless it contains a public referendum – one big sticking point – and several key members also oppose a controversial bridge project over the Columbia River at Vancouver that is launched by the House plan.

Then there is a procedural issue. State Sen. Michael Baumgartner, R-Spokane, notes the House hasn’t passed a bonding bill, HB 1956, which is necessary to implement a portion of its plan. “It’s pretty hard to take it seriously in the Senate until they pass a complete package,” he said. The hitch, of course, is that a bonding bill takes 59 votes, and the House had enough trouble getting to 51.

But the biggest problem is that there isn’t much time left to work out the differences — the current legislative session appears to be in its final days, following the announcement Thursday morning of a budget deal between the House and Senate. Gov. Jay Inslee suggested last week that lawmakers might remain in the capital city after a budget is passed, to deal with transportation. But legislators may be of a different mind about that.

Got That Out of Their System

The measure would raise $10 billion for new transportation projects over the next decade, $3.7 billion from a 10.5 cent gas-tax increase and $3.5 billion from bonds that would be tied to those gas taxes. The plan is backed by a coalition of business, labor, transit and environmental groups, and it seemingly has something for everyone – an example of the art of political coalition-building. It includes $5 billion in new road projects across the state, $1 billion for ferries, $1.1 billion for preservation and maintenance, $900 million for transit, bike paths and pedestrian improvements, $150 million for rail, and $150 million for the stormwater projects favored by green groups.

It was the third day in a row that the House had debated the transportation package, and much of the vim that had marked the chamber’s previous two debates appeared to be gone. The moment the majority Democrats moved for reconsideration it was a foregone conclusion they had the votes.

And the arguments were essentially the same as before –the most interesting point being that Democrats found themselves arguing the business-community position, and Republicans found themselves arguing against it. Standout speech of the day was delivered by Rep. Cyrus Habib, D-Kirkland, who pointed out that transportation is a key economic development issue. Jammed freeways in the greater Seattle area inhibit commerce, he said, and they frighten job seekers from beyond the region as well as companies that might seek to relocate in Washington.

In his work as an attorney, Habib said he deals with businesses across the country. “I was talking to one of those businesses from Austin, Texas, one of those looking to come out here in Washington state, but when the founder of this company heard about the kind of political gridlock that is keeping us from moving forward on a top business priority, that person said, ‘I’m not sure that is the right state. I’m not sure if you’re really committed to making sure that Bellevue and Seattle are connected to the 405, which is Boeing’s spinal column, and it is going to have the kind of congestion relief it needs. I’m not sure that you’re going to work on transit opportunities for our employees.’ So they may end up going somewhere else, Mr. Speaker.

“It is political will that we show here to businesses around the country. The ones that are already anchored here are looking for a Legislature that says yes – yes to opportunity, yes to the 21st century, yes to the jobs of the 21st century, and doesn’t bury its head in the sand, doesn’t pretend like the Skagit River bridge didn’t just crumble.” 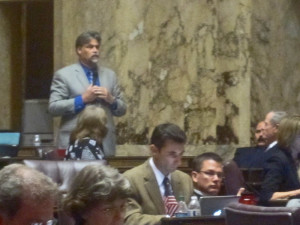 On the Republican side, there was nothing that came close to that rhetorical flight, and no speech approached state Rep. Matt Manweller’s declaration Wednesday that the Capitol has become a “calculator-free zone.” Republicans said they would love to vote yes on taxes if only they could be convinced the Department of Transportation and state transporation policy in general has been swept clean of waste and mismanagement. “There is nothing different about this package from yesterday,” said state Rep. Ed Orcutt, R-Kalama. “There are no changes, no reforms, no nothing. Nothing that can give us a yes. And for that reason the public continues to say no to this package. I continue to say no to this package, and this House chamber should continue to say no to this package.”

The vote continued to split largely along party lines – a rather unusual thing on a transportation issue. Generally transportation tax measures enjoy bipartisan support. The only Republican to vote yes was state Rep. Hans Zeiger of Puyallup. The only Democrats voting no were Hans Dunshee of Snohomish, Kathy Haigh of Shelton, Chris Hurst of Enumclaw and Monica Stonier of Vancouver.

After it passed the tax measure on the second try Thursday, the House also voted for a follow-up bill, HB 1955, that establishes the spending plan for the tax package. That measure passed 52-40. The Democratic member who voted for the spending but not for the taxes was Haigh.