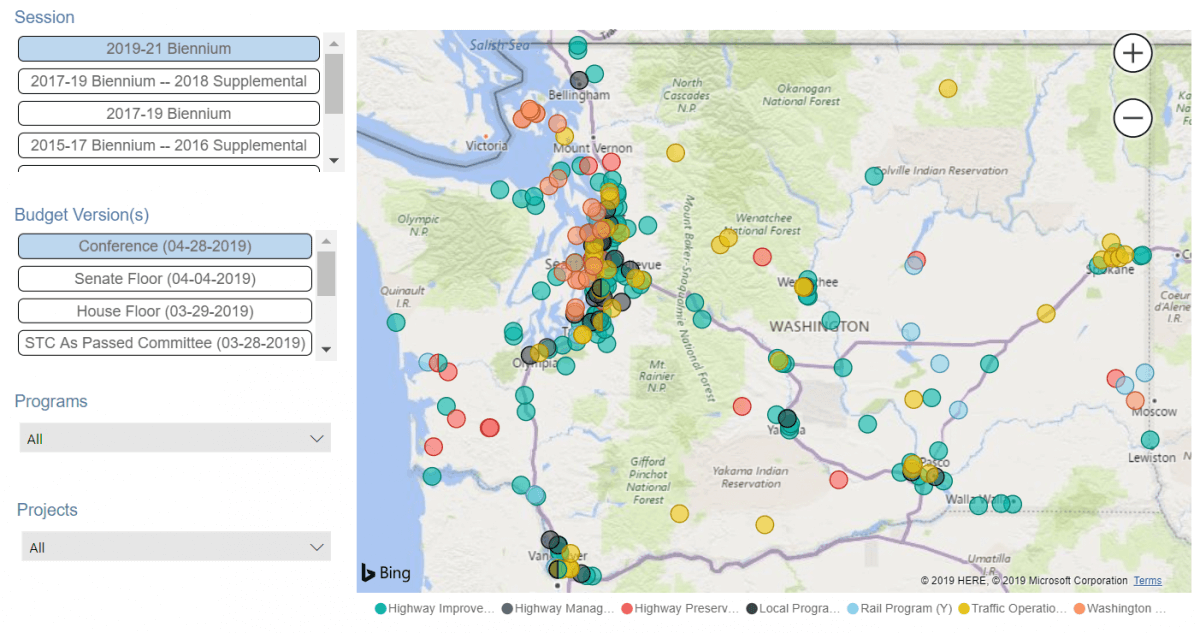 Highlights from the Legislature’s transportation budget

The Legislature passed a $9.98 billion, 2019-21 transportation budget Sunday — the final day of the 2019 session — on a 49-0 vote in the Senate and a 96-2 vote in the House. The budget, which funds transportation-related projects across the state, is now headed to Gov. Inslee’s desk.

“This budget addresses the transportation needs of our state in a fiscally responsible way,” said Sen. Steve Hobbs, chair of the Senate Transportation committee, in a press release. “This was a good, bipartisan effort to keep our promises and move our state forward.”

Praise for the budget’s bipartisanship was a common theme in floor remarks. In both chambers, members from both sides of the aisle spoke in support of the bill, often naming projects in their districts that will get a boost from the budget.

“When you are in a process like this, you get to know a lot about people,” Rep. Jake Fey, chair of the House Transportation Committee, said on the floor. “And, we’ve had some great participants in our budgetary process. Outstanding people who have spent a lot of time to do the due diligence that the public expects of us.”

The map below shows where funded projects fall throughout the state — an interactive map is available online here.

Connecting Washington projects included, projects that would receive some of the most funding under the Legislature’s passed budget in the 2019-21 biennium include:

Other highlights, featured by Senate Democrats in a press release, include $4.2 million for funding a third cadet class and an additional position for Washington State Patrol and $35 million in savings and $20 million in toll revenue — plus funding from SB 5825 — to complete the I-405 north end.

Sen. Doug Ericksen was the only legislator to speak out against the bill on the Senate floor. He said that some of the funding for an office that will start pre-design work on replacing the I-5 Bridge over the Columbia River would be coming from a bill the Legislature passed the day prior, which would increase revenue from a tax on hazardous substances.

“Unfortunately, in the underlying budget, we take $15 million of that hazardous substance tax, which is supposed to go to clean up toxic sites, and we use that to build a building in Vancouver, for the bridge project,” Ericksen said. “I just think it’s not a very good idea, to say that we’re going to raise a hazardous substance tax to clean up toxic sites throughout Washington State, then, before the budget’s even dry, before we even get to the part where we’re diverting money to the General Fund, we divert money in the transportation budget for a building.”

Ericksen ultimately voted in favor of the transportation budget’s passage.

While almost every lawmaker who spoke on the floor urged support for the bill, many also acknowledged that the budget doesn’t fully address a few, key transportation-related issues facing the state. For instance, though it allocates $35 million toward creating the I-5 Bridge office, it doesn’t fund the bridge’s replacement.

“I’m proud of the bipartisan cooperation and outcome of this budget,” Hobbs said in a press release. “This is a good budget, but it is a bare-bones budget. Our state has many transportation needs and lacks the means to meet them. Fish culverts, replacement of the I-5 bridge in Vancouver, the US 2 Trestle in Snohomish County, and many other projects large and small across the state.”

The projects Hobbs named are among those his $17 billion, 10-year transportation package proposed earlier this session, which included a carbon fee and increased gas tax among its revenue sources, would fund.