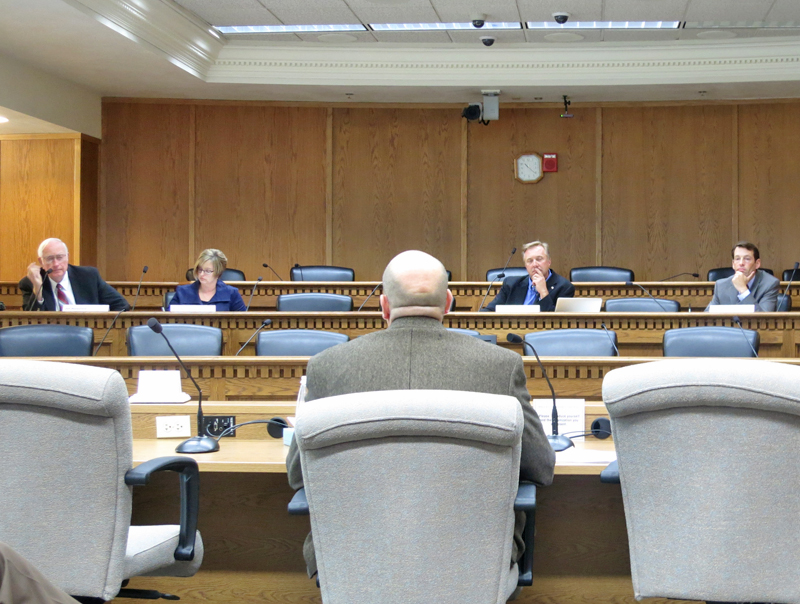 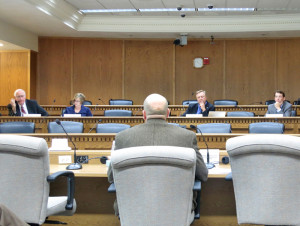 The Senate Energy, Environment and Telecommunications Committee hears testimony from Kelly Susewind of the Department of Ecology.

OLYMPIA, Sept. 24.—Everyone’s favorite fish fight is looking like a front-and-center issue for next year’s legislative session as the state Department of Ecology plugs ahead with a plan to adopt a water quality standard so stringent no one can meet it.

Known in statehouse circles as the “fish consumption” battle, it centers on a radical increase for the state’s estimate of human fish consumption. But this isn’t about salmon and tartar sauce. The estimate, due to be adopted next year, is expected to ratchet up water quality standards for industry, municipal wastewater treatment plants, stormwater runoff and every other activity that requires a discharge permit. What it means is that right now Washington is contemplating the most stringent set of water-quality regs in the country, requiring discharges to be cleaner than the waterways into which they are discharged, with standards so tough they cannot be measured by modern science, and cannot be attained with current technology.

To hear some describe it, this isn’t about fish – it’s about Armageddon. A hearing Monday before the Senate Energy, Environment and Telecommunications Committee set the stage as officials of the Department of Ecology laid out their logic. Afterward, Chairman Doug Ericksen, R-Ferndale, said the Legislature will have to decide next year whether to take on the agency and demand that it prove the science before adopting new rules. That was one proposal that surfaced in the final days of this year’s legislative session, in the form of a Senate budget proviso offered by the Boeing Co. It would have launched a study more comprehensive than anything done by Ecology and would have required that it be completed before rules are adopted. But Gov. Jay Inslee nixed that idea when he threatened a veto, and lawmakers were unwilling to hold up the session’s adjournment for debate on a single issue. Ericksen said lawmakers are going to have to consider doing something next session because the rules will have an enormous effect on business and local governments. “By definition you have to comply, or you have to move to South Carolina,” he said.

One key point brought out by the hearing: Nothing says Washington has to adopt new regulations.

Could Shut Down Puget Sound Development 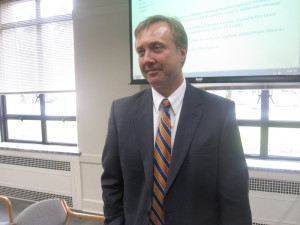 Right now Washington uses a 6.5-gram-a-day estimate for fish consumption, and that assumption underlies the state’s water-quality standards. Tribal interests and other critics, primarily in the recreational fishing industry, call it ridiculously low. That’s about a half-pound per month, and it is generally acknowledged there are many who eat many times that amount. The state uses a substantially higher figure for its sediment-management standards, 54 grams a day, or 3.5 pounds a month. What regulators are talking about adopting is a radical increase for both sets of rules — as high as 267 grams a day under one early proposal, or 17.6 pounds a month.

Hue and cry from business and local governments prompted the Gregoire Administration to put the brakes on the process in 2012. But the hold wasn’t permanent. Ecology says it expects to adopt a draft rule early next year, with a final rule to be adopted by the end of 2014. Testimony at Monday’s hearing appeared to indicate the agency is contemplating a somewhat lower number – the 175-gram estimate adopted by Oregon in 2011, currently the highest standard in the country, nearly 12 pounds a month. From there it would develop water-quality regulations for each contaminant that is discharged, using a complicated estimate of risk factors.

“This is an unusual process where there is a tremendous push for Washington to do what Oregon did,” said James Tupper, an attorney representing private clients in the Department of Ecology rulemaking process. “It is unusual to see such passion around particular numbers. From the regulated-community perspective for industry and local governments, when we look at the water quality criteria applied in the state of Washington, there are tremendous concerns about the ability to manage and comply with that.

“Based on Ecology’s water quality monitoring data, most of Puget Sound, Cape Flattery all the way down to Olympia, would be below the Oregon criteria, which would mean most of the Puget Sound basin would be subject to listing on what is called the 303d list for water bodies. That is a significant result or regulatory posture for Washington state to be in. It would mean that within the basin, based on the listing, there could be no new or expanded discharges of processed water or storm water in that basin until the basin was subject to cleanup plans. And I doubt that there are enough resources for Ecology and the Environmental Protection Agency to develop that kind of plan.” 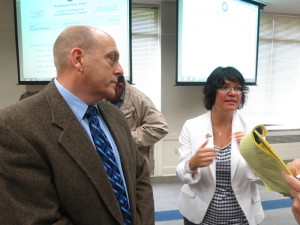 Kelly Susewind, director of the Department of Ecology water-quality program, and agency director Maia Bellon speak with reporters after hearing.

Planning is one thing – that’s a matter for government to worry about. Compliance costs are a different thing altogether. Those costs are borne by the commercial enterprises that are subject to the rules – reason for Boeing’s concern – or by the taxpayers who are ultimately responsible for the municipal wastewater treatment plants. In Oregon, for example, the 175-gram level is estimated by the pulp and paper industry to require a $500 million investment in state-of-the-art pollution-control devices, plus a $90 million annual cost for maintenance and operations – and still the water-quality standards won’t be met. In this state, as in Oregon, regulators say dischargers will be able to apply for “variances” if costs are prohibitive or standards can’t be achieved. Kelly Susewind, director of the Ecology water-quality program, said measurements and testing might not be sufficient today, but within a few years science might catch up. In the meantime, he said, “obviously, if we can’t measure it, we won’t hold you to it.”

But it is an absurd prospect for anyone who has to struggle to with compliance, Ericksen observed. “You see what I’m saying from a layman’s perspective? I’m setting a standard that I can’t even test for and I can’t even see. I have constituents that have waterfront businesses, and the requirements for their storm water are below the levels of the rain water before it hits the roof on their building. So every time they have a rain event they have to go out and take a sample of their storm water runoff from the roof, and somehow treat it to a level that is cleaner than the water raindrop when it hits the roof.

“So what I don’t get from what you’re talking about is that I’m going to have levels that I can’t measure, and I’m going to have requirements that I can’t clean up to, and I’m going to tell businesses not to worry about it because you’ve got five years until we figure it out, and maybe between now and then I’m going to find a way to measure this new level — but I won’t necessarily have a technology that allows me to clean up to this level. And since I’m [on] a 303d-impaired [water] body, I can’t do anything because I am discharging into it. Isn’t this the kind of scenario that sets up a no-win situation?”

Regulators say they are compelled to adopt new water-quality standards because of pressure from tribal interests and the recreational fishing industry. From there everything follows. They say that if they adopt new standards, the feds insist that they be stringent. Yet they admitted during the hearing that there no federal mandate that Washington adopt new regulations.

Washington’s current 6.5-gram fish-consumption estimate is a federal number, approved by the Environmental Protection Agency in 1992, and embraced by many states as they have adopted their own water-quality regulations. Today EPA has offered more recent “guidance” to states – not a rule – that they ought to adopt a 17.5-gram estimate, Susewind said. But since EPA must approve any new state standard, the feds have final say.

In fact, when the state of Idaho attempted to write new water-quality regs using a 17.5-gram estimate, the feds decided that was insufficient and sent them back to the drawing board.

What has happened, Susewind said, is that the feds have taken a new tack. They have decided that fish-consumption estimates ought to be designed for the populations that eat the greatest amounts of fish – presumably that way everyone is protected. EPA suggests a figure of 142 grams for “subsistence” consumers who rely on fish for a large part of their diet. And in the Pacific Northwest, Susewind said tribal members and recreational fishermen are presumed to eat even more. The Oregon estimate of 175 grams a day was based on Washington studies of consumption by the Nez Perce, Umatilla, Squaxin, Suquamish, Tulalip, Warm Springs and Yakima tribes.

Susewind said tribal governments have said they might be able to accept the 175-gram estimate, though they view it as a compromise. “They are saying, give us 175 and we might be able to live with it.”

But if there is no requirement that Washington adopt new rules, what is driving the effort? Susewind said it is the threat of litigation from tribal interests and other groups. Indeed, one such legal effort has already been launched. Waterkeepers Washington, a group that encompasses local organizations like the Puget Soundkeepers Alliance and Columbia Riverkeepers, has filed a 60-day notice of intent to sue. The action is directed at the Environmental Protection Agency, and seeks to force the federal agency to sue the state of Washington to adopt new water-quality regulations. The 60-day period expired Monday, Susewind said, meaning a suit could be filed at any time.

“The important part is that this keeps the pressure on for Ecology and Washington state to step up to this,” he said. “I’m hoping that this puts pressure on us to deliver, so if we don’t have a draft rule out by early ‘14, or if we don’t get the final rule out by the end of ’14, then EPA is going to sue.”

More jaundiced legislative observers are rather less impressed by potential lawsuits – they’ve heard it all before. Interest groups threaten lawsuits all the time, and if one actually is filed and goes to trial, the process of litigation offers many ways to satisfy the courts. Ericksen said he expects to hold at least one more hearing on the issue before the 2014 session convenes. It is the Legislature’s job to oversee the actions of state agencies, he noted, and correct them if it sees fit. “Once we get a little further into it, we will make a determination of what the federal requirements are, versus where the state actually goes. Because there is a tendency for every level of government to blame the government above it for the things that people don’t want. So the counties blame the state and the state blames the feds.”