Two new reports from pollster Stuart Elway released this week show an upbeat electorate in Washington state, and one with education — not the economy — as its top legislative priority heading into the start of next week’s session.

More than 60 percent of voters surveyed said they anticipate “things to get better over the next year” at the national, state and local level, perhaps fueled by a bevy of positive news about the U.S. economy in recent months.

Forty-two percent of the 502 voters surveyed placed education No. 1 in their list of priorities, the first time in the last seven years the economy didn’t rank first heading into a legislative session, according to the poll. In a boost for Gov. Jay Inslee’s budget proposal, majorities found implementing new taxes favorable or acceptable.

Another major issue on the Legislature’s plate this year, transportation funding, moved up to fourth overall, with taxes ranking third, budget and state spending fifth, and the environment sixth, according to the poll.

Voters split on paying for the education mandates by using existing and expected revenue, spending cuts or raising taxes, or a combination. The state expects an additional $3 billion in revenue due to the improving economy over the next two years, but that wouldn’t be enough to cover the funding mandates and all of Gov. Jay Inslee’s spending priorities, which he included in his budget proposal last month.

Inslee spelled out a $5 billion increase in state spending, to $39 billion overall. The state expects to end this budget cycle with a $34 billion budget. Inslee proposed taking the expected revenue gains, $400 million from a cap-and-trade program, another $800 million from instituting a capital gains tax, tapping the state’s reserve for more than $500 million, raising the state tax on cigarettes, and a mix of cuts and tax-loophole closures. That would fund part of the McCleary decision requirements, pay raises for state employees and teachers, restoring some program cuts, and a host of other priorities.

Elway reported that 71 percent of voters surveyed found putting a tax on carbon emissions favorable or acceptable, while 77 percent said they felt the same way about hiking the tax on cigarettes by 50 cents per pack.

The poll found that 57 percent of voters felt a capital gains tax would be favorable or acceptable to raise new revenue for the state.

“The high levels of initial acceptance indicate that the Governor has seized the initiative,” the report says. “It is usually not hard to win an argument against taxes, and the debate has not begun. But opponents of these taxes are starting at a disadvantage.”

The unemployment rate has steadily ticked up in Washington state in recent months, to a preliminary estimate of 6.2 percent in November, but labor economists attribute that to more workers re-entering the labor force seeking new jobs. The state has added 82,000 jobs since November of 2013, according to the Employment Security Department.

Looking around the state, King and Snohomish counties are the chief drivers behind the state’s dropping unemployment rate, with 4.4 percent and 4.8 percent unemployment rates in November, respectively, according to preliminary estimates. Whitman County on the Washington-Idaho border is next, with 5 percent, while rural areas such as Lewis County, Yakima County and others see unemployment in the 8 to 10 percent range.

The improving economic trend continues to look strong in Washington and across the U.S. heading in to 2015, and Elway cites the positive economic outlook — and the state Supreme Court’s education-funding mandates — as the main reasons education now tops the economy as voters’ top priority. 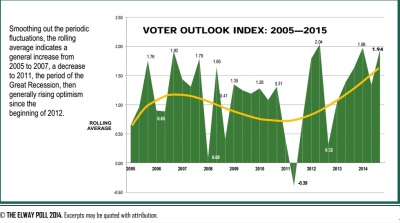