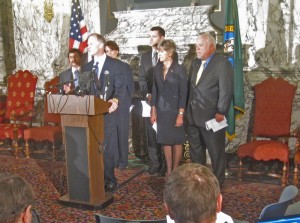 History was made Monday in the Reception Room of the state Capitol as state Sen. Rodney Tom, D-Bellevue, appeared with Tim Sheldon, D-Potlatch and Republican members of the new Senate Majority Caucus.

OLYMPIA, Dec. 10.—The earth shook Monday under the state Capitol and somewhere in the distance you might have heard the state’s business community ringing the church bells as a bipartisan coalition of 23 Republicans and two Democrats formally announced they would be assuming power in the state Senate next year.

The coalition government – unheard of in the Washington state Senate – means that Democrats won’t be running the show next year, even though they have a 26-23 advantage in terms of membership. The effect will be dramatic, steering the Legislature toward a middle course and forcing Republicans and Democrats to talk to one another. Big bold initiatives from the left won’t get far in the Senate, and nothing too far to the right will get past Gov.-elect Jay Inslee or through the House, which remains solidly under Democratic control. It becomes clear the Legislature’s upper chamber will become a balancing element and a brake.

Already there may be one big casualty. The effort to promote an enormous tax increase next year in the name of education may just have been harpooned. Several longtime Democratic Senate committee chairs also will be dumped in an organizational plan that would give control of a half-dozen committees to Republicans, including key positions overseeing health care, education, business-and-labor issues and the budget. But the coalition is offering to let the Dems retain control of six other committees. Now it’s up to Democrats to decide whether they have the stomach for divided power – or whether they would rather stay in the corner and allow the other team to control the field.

Democratic Party leaders won’t be shut out, but they will have to learn to share, pledged Rodney Tom, D-Bellevue, who will take over reins as leader of the Majority Coalition Caucus. “The public is not looking for one-party domination,” he said. “The public is looking for us to get away from politics and start governing. The election season is over. We want to make sure that we are focused on policy and on governing and not on politics.”

‘New Team on the Field’

The announcement, which came at a Monday-morning press conference, was not altogether unexpected. Tom and Tim Sheldon, D-Potlatch, have been hinting for weeks that they might vote with Republicans and reorganize the Senate. But it didn’t become possible until last week, when a recount in Vancouver established that Republican Sen. Don Benton had won his race for re-election by a bare 74 votes. That gave Democrats their bare three-vote advantage in the Senate, meaning that if two of them voted with Republicans, control could shift. From that point on it was a matter of firming up support for the most dramatic upheaval witnessed in the state Senate. Over the weekend the Republicans got their 25th signature on a letter declaring the new coalition to be in charge.

Though the power play has been characterized by some as a Republican takeover, it should be noted that the support of the two centrist Democrats made it possible, and they will be playing the decisive role in the new Senate order. Tom, as majority leader, and Sheldon, as president pro tem, will have the deciding votes on the Senate Rules Committee, which determines what bills will advance to the Senate floor. Meanwhile Democratic Party leaders have been unable to manage the Senate by themselves. The strength of the party comes from the urban Puget Sound area, where some members lean overwhelmingly to the left, while other Democratic members take a more moderate business-oriented position. Lately there hasn’t been much common ground. Democratic control of the Senate has been narrow enough that the caucus has had trouble mustering the required 25 votes on anything controversial.

In 2011, exasperated Democratic leaders were forced to deal with Republicans on the budget because they couldn’t raise enough votes on their own. And earlier this year, when party leaders tried to go it alone to pass a budget that used accounting wizardry to make the books balance, the tactic blew up in their faces. Three Democrats, including Tom and Sheldon, voted for a Republican budget March 2 and put the GOP in the driver’s seat for the remainder of the session.

For all the anger that caused, the end result was a good one, Sheldon said. “I believe that if we hadn’t had a bipartisan coalition at the end of the last session we wouldn’t have had any reforms,” he said. “The reforms of the past are just the beginning, and I don’t believe we would be able to negotiate very well with the House without the coalition being formed. The coalition caucus is the surest path to more reforms and a sustainable budget for next year.”

The team will scrub every last inch of the budget looking for ways to save money, Schoesler said, and it certainly won’t be enthusiastic about raising taxes. And in perhaps the biggest irony of the day, both Schoesler and Tom declared the coalition will support Democratic Gov.-elect Jay Inslee in his promise to avoid tax increases — a pledge many Democrats privately regard as a cynical campaign ploy the new governor ought to discard at the first opportunity.

“If this was about power and control, we would have had chairs of every single committee,” Schoesler said. “This is not about that. This is about governing in a collaborative manner, and it is focused on the needs of middle-class Washingtonians and the issues that are important to them.”

The power-sharing arrangement the coalition has proposed would allow the Democrats to name chairmen of six committees – natural resources, agriculture, trade and economic development, financial institutions and insurance, higher education and environment and marine waters.

Chairmanships of three committees would be shared – human services and corrections, transportation and energy and telecommunications.

But the six that would go to Republicans are the big enchiladas – the powerful committees that operate in the hottest policy areas. One is the obvious choice, the powerful budget-writing Ways and Means committee. That will be chaired by Sen. Andy Hill, R-Redmond. Others are just as key. Commerce and Labor goes to Sen. Janea Holmquist-Newbry, R-Moses Lake. Early Leaning and K-12 Education goes to Sen. Steve Litzow, R-Mercer Island. Law and Justice goes to Sen. Mike Padden, R-Spokane. Health Care goes to Sen. Randi Becker, R-Eatonville. And Government Operations goes to Sen. Pam Roach, R-Auburn.

Schoesler pointed out it’s not often the minority gets anything – certainly Democrats haven’t offered when Republicans have been in the minority in the Legislature.

Tom said the offer demonstrates the coalition wants to share power. “I think this sends a very strong message to the public that we are serious about this. We want to work in a collaborative manner and govern from the middle.” Tom, it might be said, is perfectly situated to make the argument.  He once was a Republican himself, during his first two terms in the House, but he switched parties to run for Senate in 2006. Tom said his stands on social issues clearly identify him as a Democrat, but he remains convinced his party needs to take a firmer stand for fiscal responsibility.

Not Really a Coalition

State Sen. David Frockt, D-Seattle, reacting for the Senate Democrats, said the caucus will have to meet privately to decide its response – and its first order of business might be to decide whether Tom and Sheldon get to stay in the room. “It’s going to be weird,” he said.

Frockt said 23 Republicans and two Democrats aren’t much of a coalition, and Democratic Party leaders aren’t sure whether they want to throw it their support.  Senate Democratic Leader Ed Murray, D-Seattle, is calling the offer of committee chairmanships a take-it-or-leave-it proposition, and Frockt said that seems to sum up the way most Senate Democrats are feeling right now. Reporters pressed Frockt: Did he feel betrayed?

No, he said, everyone was pretty well resigned to it once the ballot-count in Vancouver began to tip Benton’s direction. “This is politics,” he said. “25 votes, I mean that is what it takes. I personally don’t feel betrayed. I don’t think other people do.”

On the other hand, state Democratic Party chairman Dwight Pelz is already pledging an effort to knock Tom out of office two years from now. And Rosemary McAuliffe, D-Bothell, says she won’t accept a demotion to ranking-member status on the committee she has chaired for years. [Note: This comment was based on an interview Monday. McAuliffe’s staff said Tuesday that the senator will remain on the committee and will accept a ranking minority member position.] “I think the people of [Tom’s] district are very disappointed in the person that they voted for,” she said. “If he wants to lead, he ought to go over and become a Republican again.”