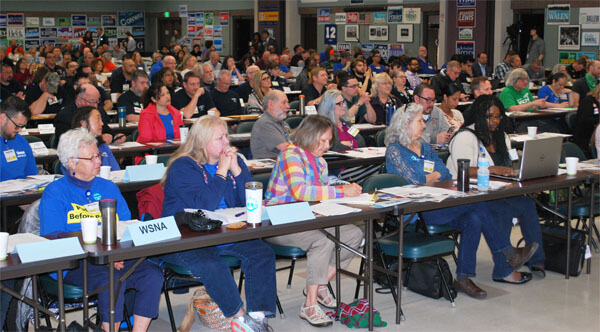 The Washington State Labor Council hosted its annual endorsement meeting over the weekend where it considered candidates and initiatives set for the fall ballot.  The Committee on Political Education (COPE) met drawing delegates from across the service, construction, and professional unions that make up the membership of the Council.

In what was perhaps the most watched endorsement conversation at the event, I-1631 failed to receive the Labor Council endorsement.  It garnered 60.2% of the overall delegate vote, needing a 2/3rds vote to receive the WSLC’s support.

This is a huge blow to the initiative’s backers and one that potentially re-creates the headaches from 2016 that carbon tax proponents were hoping to sidestep.

I-1631 is a carbon tax initiative headed for the November ballot sponsored by a group called the Alliance for Jobs and Clean Energy.

The “Jobs” part of the alliance is a nod to a political calculus.  Previous efforts to get a carbon initiative passed, both those that made the ballot and those that were considered for it, were often revenue neutral.  This meant that any funds raised under the carbon tax model would have an offsetting reduction in revenue somewhere else in state government.

In 2016, I-732 created a carbon tax with an offsetting reduction in sales tax of one percentage point off the state tax.  That initiative failed with a 59% no vote.

One political problem with I-732 was that it failed to coalesce progressive voices behind the initiative, including a number of environmental interests.  A key concern from some was the failure to use a carbon tax to generate net positive tax revenues.  Some progressives couldn’t get behind a proposal that would reduce sales tax.

I-1631 was meant as a compromise on this point, where a significant amount of the revenue would go towards creating jobs in the “green economy.”  Funds would also go towards addressing impacts of climate change, like helping threatened coastal communities manage a response to rising ocean levels.

But, the “jobs” part of this initiative is perhaps the most central and fundamental difference in I-1631 from the 2016 initiative.  It represents an effort from environmental progressives to “broaden the tent” of their initiative to draw in labor groups that are concerned with job creation.

As part of the Alliance for Jobs and Clean Energy, there are a number of labor groups represented on the steering committee, including SEIU 775, Teamsters, UAW, and UFCW.  These unions can be expected to contribute time and money to support I-1631.

Nevertheless, that the Labor Council as a whole didn’t get behind the tax is a blow to initiative’s chances at building a strong, progressive movement heading into the fall ballot.

**Correction: The Building Trades Council is a Steering Committee member of the Alliance. I listed them above as a union I assumed would also be supporting the Initiative.  That assumption was incorrect, is corrected above, and is clarified here. Apologies to the Council for my error.