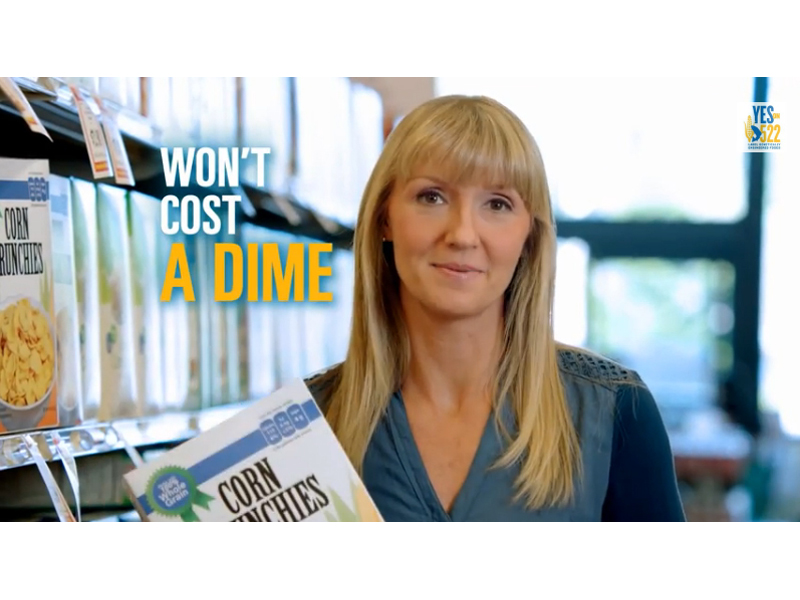 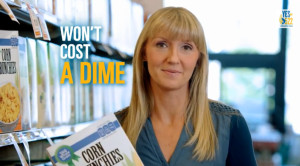 Scene from a yes-on-522 ad that debuted Monday: ‘If it is genetically engineered it has to say so. It is that simple and it won’t cost you a dime.’

OLYMPIA, Sept. 17.—Advocates of Washington’s Initiative 522 say it won’t cost a dime, but a new opposition report says that if voters require warning labels on genetically modified food products, the typical family of four would pay an additional $490 a year for groceries.

That’s because I-522 would make Washington the first state to require labeling – meaning special packaging for the Washington market, and quite likely different products with different ingredients. And the hit to consumers would just be the start, opponents say – regulation also would cost state government tens of millions; farmers, manufacturers and grocery stores would have to spend hundreds of millions more to comply. There’s also the fact that third parties can sue to enforce the law. The sky might be the limit.

It is a voter-tested argument, unleashed in California last year when that state’s similar Prop. 37 made the ballot. Checkstand impact was one of the big reasons Golden State voters rejected the measure 51-49. And now that the same battle is being repeated in Washington state, the arguments certainly have a familiar ring. “Recycled from the California campaign,” says Elizabeth Larter, spokeswoman for Yes on 522.

Of course it’s recycled. Californians did think of it first. But does it make the argument any less valid? For anyone to make the claim that I-522 will cost nothing is absurd, says Kriss Sjoblom of the Washington Research Council. “The debate is not about whether there are going to be costs, but really about how big the costs are going to be.” 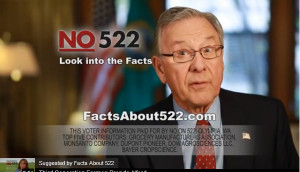 Former Attorney General Ken Eikenberry calls measure ‘the opposite of truth in labeling.’

Both sides of the big-spending campaign unleashed their first television ads Monday, and it has become clear that I-522 is the showcase campaign of an otherwise sleepy off-year election. The money is pouring in from national sources, from activists and bioengineering companies alike. So far the yes campaign has raised $3.6 million and the opposition has raised $11.1 million. Yet to this point most attention has gone toward the form of the campaign – the fund-raising and the similarities between Washington and California – and not the content of the argument.

I-522 would require front-of-the package labeling for most grocery products that contain genetically modified ingredients – affecting as much as 70 percent of the products on supermarket shelves today – as well as labeling on the seed stocks farmers use. Advocates call it a right-to-know issue, say they aren’t out to change shoppers’ behavior, and insist they are taking no position on the safety of common foodstuffs. That avoids an argument about science, perhaps a tough one to win, given the preponderance of scientific opinion that genetically modified food products are safe. But allegations of danger and harm lurk just below the surface of the campaign, and they even show up in the language of the initiative itself. It says warning labels are warranted because of “adverse health or environmental consequences,” “toxicants and health concerns,” “toxic herbicides” and “health risks.”

And what about the checkstand factor? No need to worry about that, says a campaign ad that made its debut Monday: “It won’t cost you a dime.” 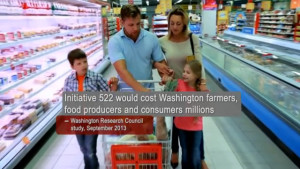 Certainly it won’t cost a dime, allows the Research Council’s Sjoblom – tens and hundreds of millions is more like it. The Research Council, a Washington-based business-oriented think tank, was commissioned by the no-on-522 campaign to produce a report summarizing all known cost impacts of the measure. At the same time the campaign commissioned an economic analysis by Northbridge Environmental Management Consultants, the same firm that estimated costs of the California initiative. Together the reports offer a rather convincing argument that the cost will be decidedly north of zero.

For one thing, the state says so. The Office of Financial Management, charged with estimating the impact of ballot measures on state agencies, concluded last month that the cost to taxpayers would be at least $3.4 million over six years. That is the cost of rulemaking by the state Department of Health, inspection and compliance, education and technical assistance, and for contracting with a private laboratory for product sampling and testing. The fiscal note says the cost of enforcement is “indeterminate” – meaning the $3.4 million might just be the start.

Of course it would be higher than that, Sjoblom says. “The OFM estimate of regulatory costs is really low,” he says. “It really contemplates a minimal regulatory apparatus. If you just take a look at the existing regulatory system we have for organic foods, and you blow that program up proportionally to the greater amount of sales that are subject to this requirement, you get a substantially higher regulatory cost.” The state organics program costs $2.5 million. Do the extrapolation and you get an annual budget of $22 million.

You also can expect the food industry to demand a higher level of regulation, Sjoblom says. That’s because the initiative allows third parties to sue if they believe laws are being broken. Strict state regulation might help insulate industry from litigation – lawyers may be the only thing it fears more than regulators. Meanwhile, paperwork record-keeping requirements impose a cost on businesses, as they track food ingredients from the field to the shelf and demonstrate their compliance. Northbridge estimates one-time implementation costs at $264 million — $28,273 for every retailer and $45,285 for each processor and other intermediaries. Annual paperwork costs would total $48 million a year.

Hit on the Pocketbook 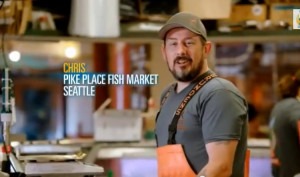 Pike Place fishmonger Chris in yes-on-522 ad: “It’s simple and it won’t cost you a dime.”

For voters the point that hits home is the wallop on the wallet. It was the game-changing argument in California, and it deserves particular attention here. The analysis depends on the year involved. Through July 1, 2019 the measure requires the labeling of all food products with 0.9 percent genetically modified content by weight; after that date the threshold is any genetically modified content at all. Northbridge estimates the cost for a family of four at $360 a year through 2019; after that point it is $490.

There is an important assumption involved – that the whole idea behind labeling is to discourage consumers from purchasing foods made with genetically modified ingredients, and that manufacturers would rather avoid the stigma of a warning label. Northbridge argues they would reformulate their products for the Washington market. “Companies would source different ingredients or manufacture their products in a way to avoid labeling them with a vague and frightening warning,” its analysis says.

There is some reason to believe that is true – it was the experience when labeling requirements were imposed on European Union countries in 2003. The few genetically modified products that were available at the time were largely withdrawn from the market. But it is a big problem here – some 90 percent of American corn and soybeans are grown from genetically engineered seed. So Northbridge envisions a scenario in which Washington food processors and manufacturers bid up the price of organic and non-genetically-engineered foodstuffs – hence higher food prices for Washington customers. The report goes through a lengthy analysis of food costs before arriving at its precise calculations.

One point about the Northbridge analysis, though — it assumes all manufacturers would substitute ingredients, and that none would settle for a genetically-modified label. That assumption might be suspect as well. But even if only 80 or 90 percent of them change their products to avoid labeling, one certainly can expect to see an effect, Sjoblom says. And the idea that labeling would impose no cost at all is absurd.

“The people who are saying that it won’t cost anything are assuming there will be no substitution of genetically engineered ingredients – that all that happens is that manufacturers are going to put labels on their existing products but the products offered for sale will not be changed,” he says. “Even if manufacturers follow that course, there is going to be some cost involved with the changing of labels. So it is not going to be zero.”

No Counter for Argument 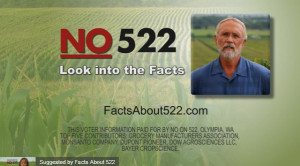 Dan Newhouse, former director of the state Department of Agriculture: ‘It is so badly written that pet food would be covered, but meat for human consumption would be exempt.’

Maybe the most surprising thing about the cost argument is that advocates for the initiative don’t appear to have an answer for it. The regulatory costs go unaddressed. Where consumer costs are concerned, it is precisely the same argument made in California, and more than a year has elapsed since it was sounded in the Prop. 37 campaign. And yet the reports and position papers issued here by advocates choose to argue other points, just as they did down south. For instance, a report posted last week on a grassroots organizing website called Just Label It focuses on the cost of redesigning packaging and concludes that it is trivial.

The closest thing to a direct response comes from the same website: A blog posting Tuesday about the Research Council report is headed, “Despite New Report, No Cost for Label Changes.” Yet the cost of changing labels is cited nowhere in the Research Council report. The blog posting says obliquely that the substitution of ingredients is a matter of speculation and assumes “significant changes in shoppers’ purchasing behavior” – which some might argue is the basic idea. But it doesn’t attempt to refute the argument.

Larter of the Yes-on-522 campaign argues that the cost argument is a scare tactic. It’s just a label. “Food manufacturers are constantly having to relabel. This is just adding a couple of words to the front of the package. That is not going to increase the cost to Washington grocery shoppers.”

She makes one other point about the Research Council report: “Your readers ought to know that the ‘no’ side paid them to do this. This wasn’t like some out-of-the-blue goodness-of-their-heart study. They were paid to do this by the ‘no’ side.”

Sjoblom bristles at that implication – it ducks the argument by casting aspersions. “We have been in business since 1932,” he says. “We stand behind every study we publish. And their claim in their statement we can’t be trusted is an insult.”