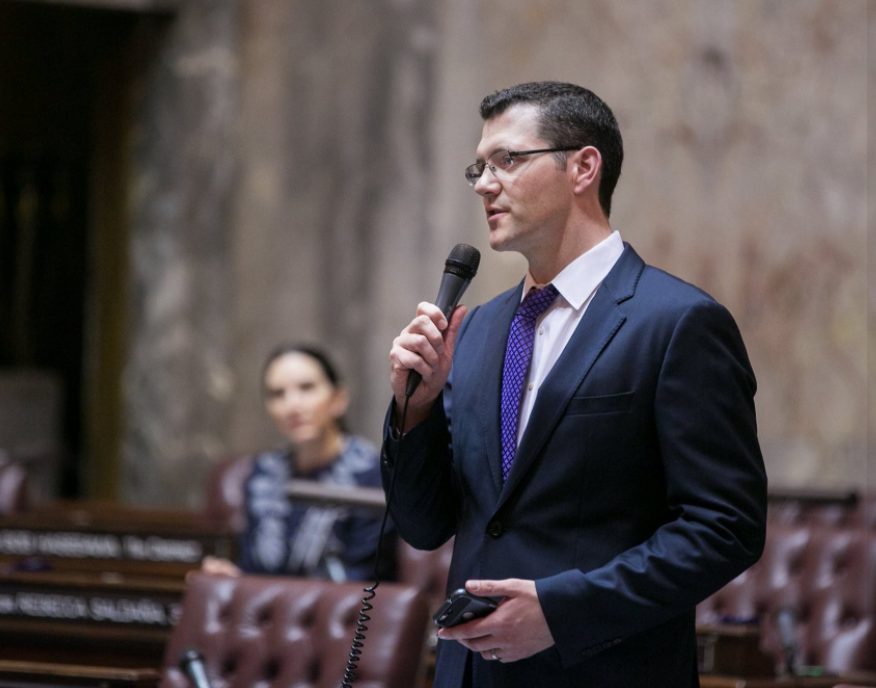 In an open letter published on Tuesday, the National Women’s Political Caucus (NWPC) of Washington called for former state Senator Joe Fain to resign from the Washington State Redistricting Commission until a sexual assault allegation leveled against him in 2018 is investigated.

Until an investigation occurs, the group requested that the Senate Republican Caucus deny Fain in-person access to staff, members of the public or other Commissioners, and allow Fain’s communications to be supervised by a third-party staffer.

The requests raise questions regarding what standards should be applied to political appointees who have been accused of sexual assault, but whose cases have not been formally investigated. If an investigation is conducted, the findings might suggest a firm conclusion. Or the findings might be inconclusive.

It’s not that an appointment like this should be withdrawn until an investigation is completed, it’s that it shouldn’t have happened in the first place. It is appalling that Sen. John Braun chose Joe Fain for this incredibly important role, rather than countless other well-qualified people in Washington who could perform this work, without having similar accusations against them,” said Reykdal.

In 2018, Fain was accused of rape by Candace Faber, a former foreign-service officer and Seattle city official. Faber alleged that Fain raped her in a Washington, D.C. hotel room on the night she graduated from a Georgetown University masters program in 2007. Fain has steadfastly denied the allegation.

Faber said she was inspired to come forward in 2018 after watching the testimony of Dr. Christine Blasey Ford against Supreme Court Justice, then nominee, Brett Kavanaugh.

In light of Republican leadership’s reversal of their support in facilitating a fair, unbiased investigation, the only option available is for the Secretary of the Senate to suspend the process of hiring an investigator,” said Billig in December of 2018.

Without an investigation, Women’s groups say the case could cast doubt on the gravity with which sexual assault allegations will be received going forward.

Across the nation, year after year, we continue to watch men in positions of power, privilege, and influence be accused of sexual violence – presidents, supreme court justices, legislators, executives, coaches, movie stars, and more,” Susan Marks, Executive Director of Washington Coalition of Sexual Assault Programs. “Our response, or lack of response, sends a clear message to survivors and the entire public: it is not worth reporting a sexual assault, because you likely will not be believed, but you will be blamed; and the people who commits acts of sexual violence will face minimal to no consequences.”

After losing reelection, Fain went on to become CEO of the Bellevue Chamber of Commerce. Then, in January of 2021, Fain was selected by Senate Minority Leader John Braun to be one of two Republican appointments to the Washington State Redistricting Commission. The Commission is established every ten years for the purpose of redrawing legislative and congressional district boundaries.

With the allegations still outstanding, the National Women’s Political Caucus has asked that a “proper authoritative body” conduct an investigation. Reykdal suggested that the investigation go through the Legislature or the Attorney General’s Office.

Reykdal says that allowing the Fain appointment to stand without an investigation sets a precedent that is unfavorable to victims of sexual assault.

As far as the precedent it sets, it’s damaging to survivors of sexual assault as it implies their allegations will not be taken seriously and it steals them of their right to due process. Furthermore, the appointment of Commissioner Fain undermines the role of these types of lauded positions in society. We are disappointed that Senate Republican Leader Braun could not choose another individual that does not have unanswered sexual assault charges against them.”

The NWPC says a robust code of conduct is necessary to “protect existing and incoming staff, the public and fellow commissioners.”

In a joint statement, the two Commissioners appointed by Democrats said they “share the concerns set out in the letter and [will] seek measures to improve safety and provide accountability.” They also agreed that Fain’s resignation would be “the best outcome…given the seriousness of the allegations, the absence of an investigation, and the impacts this could have on public participation.”

Responding to NWPC’s requests on Tuesday, legislative Republicans rebuked reporters for asking questions on the matter.

It is irresponsible journalism to continue to push this narrative. Senator Fain, the Seattle Times, many organizations and groups requested that the allegations against Senator Fain be investigated and the purported victim refused to have any investigations. This was very clearly an election year attack and it’s stunning to me that even though he lost, this is going to be dredged up. This is just ridiculous,” said Sen. Ann Rivers (R – Vancouver)

Minority Leader Braun said to a reporter, “It is disappointing that you are willing to drag up this and become part of that political attack … This shouldn’t be how journalism works.”

Faber supported a potential investigation by the Legislature, though she did not report her allegation to police in Washington, D.C.

Republicans say they will not comply with NWPC’s requests and Fain has not indicated that he plans to resign. Neither the Legislature nor the Attorney General’s Office has said whether an investigation into Faber’s allegation will take place.