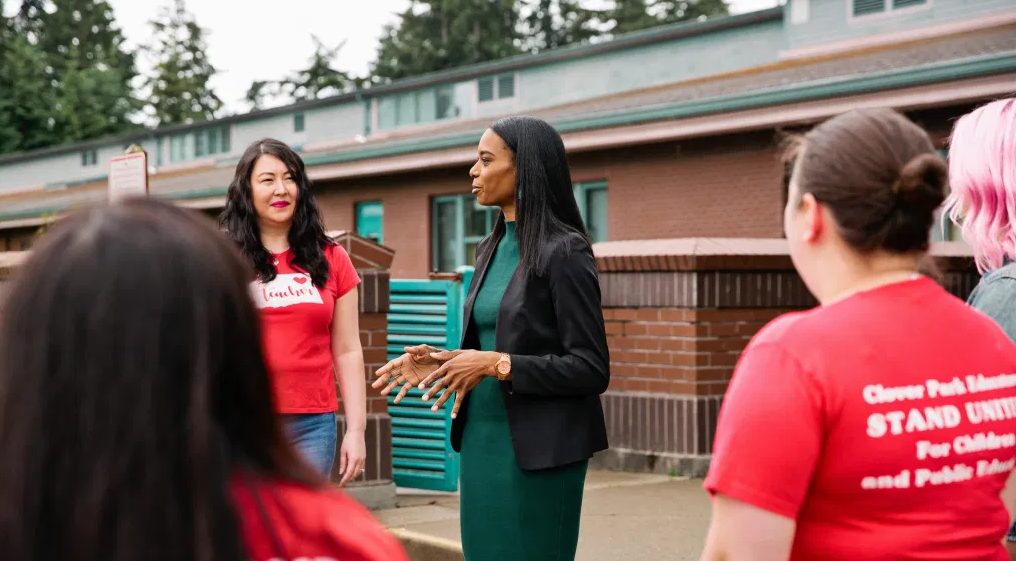 With most ballots counted from last week’s Washington State primary election, several women of color running for county, state, and federal positions are poised to advance to the general election.

Some of the candidates would be the first woman or person of color to occupy the office they’re running for.

In one of the most high profile legislative races this cycle, Democrat T’wina Nobles is challenging Republican incumbent Sen. Steve O’Ban in Pierce County’s 28th Legislative District. As of the latest returns, Nobles leads in a tight race (50.2% – 49.65%).

With both candidates advancing to the general election, it could be a toss up on November 3rd. Should Nobles win, she would be the only Black woman elected to the state senate.

In what is technically a non-partisan race, incumbent Chris Reykdal won 40.26% of the vote in a field of six candidates. He’ll face Maia Espinoza, who has been endorsed by numerous legislative Republicans.

In his analysis of the primary results, Wire publisher DJ Wilson wrote that Espinoza “campaigns and sounds like a Trump Republican, but will likely draw some progressive votes that may like the idea of a woman of color in the executive branch.”

If Harris finds a way to gain ground in the general election, a victory would make her the first Black woman elected to the Legislature outside of the Puget Sound region.

In Pierce County’s 29th LD House primary, two Democrats are vying for a spot in the general election. Incumbent Steve Kirby is holding off Sharlett Mena — a progressive challenger endorsed by Senator Bernie Sanders — by 153 votes as of Wednesday afternoon. There are an estimated 750 votes left to be processed in Pierce County.

According to the Secretary of State’s guidelines, a manual recount is required when “the difference between the top two candidates is less than 150 votes AND ALSO less than 1/4 of 1% of the total votes cast for both candidates.”

The Secretary of State’s office said the mandatory recount rules also apply to the number two and number three finishers in the primary. Mena will need to makeup 0.5% in the final returns to trigger a mandatory recount, though she can also request one.

Whoever emerges victorious from the primary will face Republican Terry Harder, who glided to a spot in the general election with no intraparty competition.

In the congressional races, Republican Jaime Herrera Beutler is running strong against Democrat Carolyn Long (56.22% – 39.75%). In a rematch from 2018, Herrera Beutler’s primary lead over Long is nearly 10 points higher than it was when all the votes were counted 2018. While the field was two candidates smaller this year, turnout has increased by 75,000 votes and counting.

A Latina and mother of three, Herrera Beutler is one of only two Republicans representing a district along the US western seaboard.

In the 10th CD’s 19-candidate primary, Marilyn Strickland emerged with the most votes – 44,613 as of Wednesday afternoon – and 20.54% of the total share. Strickland, the former Mayor of Tacoma and CEO of the Seattle Metropolitan Chamber of Commerce, would be the first Black person to represent Washington State in Congress.

Strickland will face state Rep. Beth Doglio in the general election, who has secured the second spot with 32,454 votes (14.94%). The general election contest will invert a dynamic that was at play in several noteworthy Democratic primaries of late.

Doglio, who is white, has been endorsed by Bernie Sanders, Rep. Pramila Jayapal, and the Congressional Progressive Caucus. Through Strickland’s work at the Chamber, she is said to represent the more business-friendly wing of the Democratic Party.

In county elections, Carolina Mejia and Ana Ruiz are candidates for County Commissioner in Thurston and Franklin Counties. Mejia is currently leading six competitors with 32% of the vote.

Ruiz is trailing Republican Rocky Mullen with 40% to Mullen’s 42% of the vote. Mejia and Ruiz will both advance to the general election.

It takes a remarkable amount of courage and leadership for anyone to run for office—and far more so for women of color. We are thrilled to see Carolina Mejia and T’wina Nobles coming in first place for each of their primaries and advancing to the general. We’ll continue to make sure that every vote in the 29th Legislative District is counted—from resolving clerical errors, to ensuring a recount if needed. No matter the result, this is a victory for the movement Sharlett Mena built here in the South Sound.”