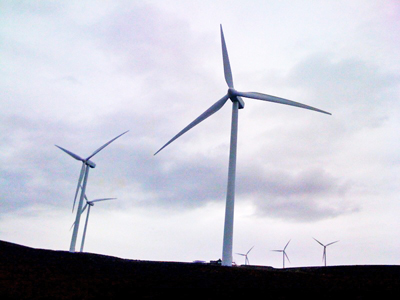 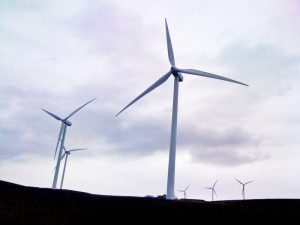 Wind turbines churn in the breeze at a Puget Sound Energy wind farm near Vantage.

OLYMPIA, Feb. 7.—Six years of battle over Washington’s renewable-energy standards has resumed at the state Capitol as utilities and business groups continue to complain that the big green-energy thrust of a 2006 ballot measure is forcing them to buy costly windpower they don’t need.

But as one of the Legislature’s oldest fights rages anew, it’s worth noting that this isn’t the same old battle. Certainly this session, as always, there’s a bill that would declare hydropower to be a form of renewable energy — and that would essentially gut Initiative 937, the voter-approved measure that requires utilities to buy an ever-increasing share of power from clean-energy sources. Gov. Jay Inslee devoted a bit of a Wednesday news conference to a denunciation of that one.

Yet that’s not the real fight. It’s about the details, nittier and grittier than ever, as utility and business groups zero in on what they call arbitrary purchasing requirements that will begin having a big impact in 2016. By that year utilities will be required to purchase 9 percent of their power from “renewable energy” sources — essentially windpower. Once again it appears there isn’t a lot of give from the environmental groups and the windpower interests that promoted the measure and have defended it since passage. The measure requires utilities to buy an ever-increasing share of their power from renewable energy providers – even though they don’t need it in a sluggish economy, and even though this state is already the cleanest around, because of the region’s reliance on hydroelectric dams. The upshot, say commercial power users and most utilities, is that the ballot measure is driving an increase in power rates while doing nothing for the environment.

The big fight begins next week when the Senate Energy, Environment and Telecommunications Committee hears the session’s most important renewable energy bill – a measure that would allow utilities to count energy conservation toward their purchasing goals. This week marked the preliminaries as House and Senate committees heard testimony on smaller-scale detail-driven measures. Battle lines are clearly drawn. Green groups and windpower advocates are saying no to it all. You have to consider the big picture, Washington Conservation Voters lobbyist Cliff Traisman told the Senate committee Wednesday – the I-937 coalition is “open to changes,” he said, but even modest-sounding modifications could undercut the renewable-energy industry. “We need to look at these totally and not just individually,” he said. 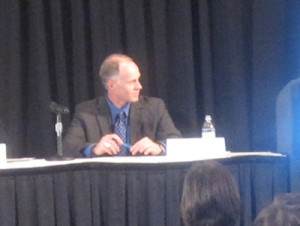 In his news conference Wednesday, Inslee pointed to one bill introduced by Senate Energy Chairman Doug Ericksen, R-Ferndale, as an example of how the Senate has “gone backwards” since a Republican-leaning coalition took power at the beginning of the year. The bill would add hydropower to the definition of renewable energy — and since the state gets 70 percent of its power from hydroelectric dams, that would essentially render utility purchasing requirements meaningless. “I-937 should not be the ceiling,” the governor said. “It should be looked at as the floor.”

Real debate on that measure ended long ago, however — it’s one of those bills that is filed every session, in varying forms, and the question was largely settled in 2009 when debate shut down the Legislature for a day. Defeat now seems a foregone conclusion. Stalemate has reigned ever since even as utilities and environmental groups have moved on. These days the debate in hearing rooms and back rooms is about the kind of detail work that might make the rules more workable for electricity purchasers but also would make an ordinary mortal’s eyes glaze over. Utilities are divided, some arguing the rules are unreasonable; others, particularly Puget Sound Energy, have made big investments in windpower and defend the overall purchasing requirements. And even on the small points, environmental groups remain wary about any attempt at relaxation. Former Gov. Christine Gregoire, a supporter of the renewable energy requirements, attempted to broker a compromise in 2011 and gave up. Democratic lawmakers in the House and Senate tried and failed. But now that a new Republican-leaning coalition has assumed control of the Senate, there seems a bit more willingness in the upper chamber to take another stab.

The measure currently requires the state’s largest utilities – those serving 25,000 customers or more – to purchase at least 3 percent of their power from “renewable” sources, a requirement that launched in January 2012. Practically speaking, that means they have to buy windpower, because solar is not yet a major factor on the market. Though utilities met that first requirement with little trouble, it’s the next one that’s the problem. On Jan. 1, 2016, the purchasing requirement rises to 9 percent. On Jan. 1, 2020, it’s 15 percent. What no one could have foreseen in 2006 was that recession would leave power demand flat. The upshot is that utilities will be forced to buy power they don’t need, displacing clean power they can buy for less from dams. That means bigger bills for consumers: Two years ago, Franklin County Public Utility District estimated that the 9 percent purchasing requirement would drive up its customers’ bills by 6 percent. Benton County P.U.D. calculated the increase in customer electric bills for windpower at 4.6 percent.

Senate Majority Leader Rodney Tom, D-Medina, told an Association of Washington Business gathering Wednesday that his caucus is sympathetic to efforts to rewrite the law. “We are having a conversation because it doesn’t make sense, especially among our smaller utilities, that when they have more power than they know what to do with, that we are forcing them to go out and buy new generation capacity in a tight environment. Again, let’s focus on those areas where we can add value and clearly this is not adding value to the economy.”

Representatives of environmental groups and renewable-energy associations aren’t disputing the idea that the requirements impose higher costs on consumers. But they say it is a small price to pay for the creation of a green-energy industry in Washington. And after all, they maintain, voters said that’s what they wanted to do in 2006. “There has been over $8 billion of investment by the renewable energy industry in Washington state in the last decade,” Nancy Hirsch of the Northwest Energy Coalition told the Senate energy panel Wednesday. “That’s a lot of economic development and investment at a time when many other industries are shrinking.”

The big battle of the session opens next Tuesday when the Senate committee hears SB 5648, which would allow energy conservation to be counted toward the I-937 requirements – because a dollar spent to reduce the consumption of electricity is a dollar not spent to purchase greenpower. But the hearings this week, on bills that offer more modest tweaks to the initiative’s requirements, showed that there doesn’t seem to be a lot of interest in compromise. State Sen. Tim Sheldon, D-Potlatch, said the groups defending I-937 don’t seem willing to give an inch. “I think there just has to be some balance here when we look at an initiative that needs some common-sense changes,” he said.

Here’s the kind of detail work that is occupying legislators these days. Irrigators are pushing a bill that would allow small-scale hydropower development on irrigation projects to be counted toward I-937 requirements: Whenever water is pumped uphill and flows back down, there’s potential for power. The Washington State Water Resources Coalition is pushing SB 5290; the I-937 coalition is opposed.

Then there’s Senate Bill 5400. Pacific Power, a multi-state utility serving customers in Walla Walla and Yakima counties, would be able to count its wind-power projects in Eastern Wyoming toward renewable-energy requirements in this state. The problem is that the boundary lines for purchasing established by I-937 stop a few hundred miles short of Eastern Wyoming. California and Oregon, which also have renewable-energy requirements, allow Eastern Wyoming purchases to be counted — not Washington. Yet Hirsch said any relaxation of the boundary lines would hurt the windpower industry in this state. Big investment in Washington, Oregon and Idaho “is all part in response to the boundary determination that was in the original law.”

Another measure aims to fit the state-mandated shutdown of TransAlta’s enormous coal-fired plant in Centralia into the scheme of I-937. After pressure from green groups in 2011, the state essentially forced the shutdown of the plant by 2025, and owners are making plans to convert to gas-fired turbines. SB 5297 would exempt transitional power from I-937 calculations of utility load – that adds a bit of certainty for utilities purchasing electricity from the plant, the firm argues, and stability for regional power needs. But Michael O’Brien of the Renewable Northwest Project said his group can brook no relaxation: “The clean energy initiative is not the place to make room for more coal,” he said.

SB 5412 and HB 1347 would allow utilities purchasing power from the Bonneville Power Administration to count efficiency improvements on hydroelectric dams toward the I-937 calculations. Utilities that own their own dams can count power that comes from hydro improvements; the others can’t. And yet customers pay for improvements on BPA dams just the same, in their electric bills. Chad Johnson of Inland Power and Light told the Senate committee it is a matter of “parity and equity” for consumers: “We would like to be able to count federal hydro efficiency improvements toward compliance, instead of sending the hard-earned Washington consumer dollars off to Idaho wind developers, as we are currently.”

But Traisman said the I-937 coalition can’t accept it: Utilities that purchase from BPA represent such a huge chunk of the customer base that he said the measure would undercut the market for windpower by about 10 percent.