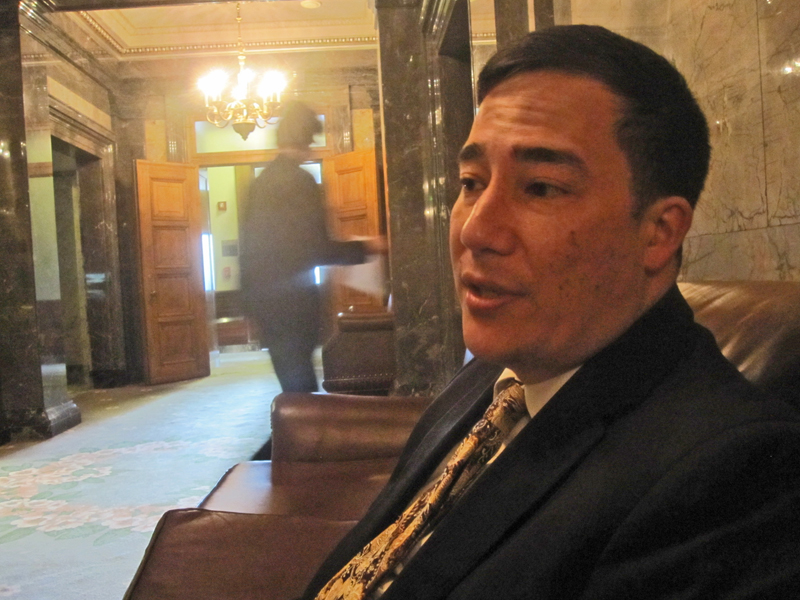 Why are Special Interest Groups Picking on Steve Hobbs? – Doorbelling Blitz Begins in Moderate Democrat’s District More Than a Year Before Election 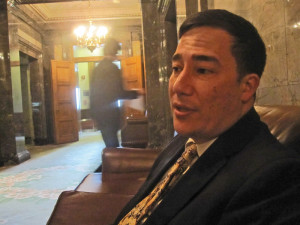 OLYMPIA, May 3.—To judge by the doorbelling that has been going on in Steve Hobbs’ district over the last few weeks, you could get the idea there’s an election coming up. And there is – a year and a half from now.

That’s so long, in political time, that it might as well be next century. But it hasn’t stopped canvassers from the Washington Education Association and the Washington Community Action Network from trudging the streets of the 44th Legislative District in suburban Snohomish County. They have been putting out the bad word about the senator and letting folks know he votes the wrong way. It is a most singular effort.

Since the beginning of the year, there has been only one other campaign like it in this state, another doorbelling effort by the teachers’ union a few miles away in the Bellevue-area district of Senate Majority Leader Rodney Tom, D-Medina. But it is fair to say Tom made himself a target when he chose this year to caucus with Republicans and turned control of the Senate upside down. Hobbs is a different story. The Lake Stevens Democrat is a swing-district moderate who hasn’t crossed party lines – yet he works both sides of the aisle, forges compromises and occasionally takes a business or education vote that antagonizes the biggest funders of the Democratic Party. He was one of three Democrats this year who accepted a gavel from the Republican-leaning Majority Coalition. In his defining act of apostasy, Hobbs was a founder of the Roadkill Caucus faction of moderate Democrats that has done much to sway the Legislature toward the middle during the last three sessions – and which, at one point, former state Labor Council President Rick Bender threatened to turn into something worthy of the name.

Hobbs figures he is being punished for his lack of ideological purity, and that he is being set up for another coordinated attack from the left like the one that almost did him in back in 2010. “I think their purpose is to try to soften me up so they can get me out of there,” he says. “As we say in the military, this is the artillery prep, this is the assault – that’s what’s happening.”

That’s what you get for being a centrist, he says. 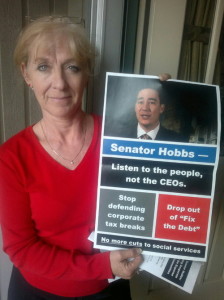 You can try to take it at face value. Washington CAN says it is upset that Steve Hobbs signed on as state co-chairman of the national “Fix the Debt” campaign — a bipartisan effort to convince Congress it is time to rein in spending, reform entitlement programs and raise revenue. The campaign, chaired by former U.S. Sen. Alan Simpson and former White House Chief of Staff Erskine Bowles, doesn’t prescribe a solution, but it has been attacked from progressive quarters nationally as a heartless CEO-backed campaign to cut business taxes by slashing government programs. Apparently the effort is such a threat that the troupe of CAN activists took to the streets to demand that Hobbs resign the chairmanship. And they have kicked up the usual doorbell effort a notch with a strikingly innovative campaign, asking 44th-District residents if they would be willing to pose for photographs holding anti-Hobbs posters, and then posting them on the Web for all the world to see. The only issue is Fix the Debt, says spokeswoman Rachel DeCruz. “There’s not anything else about Hobbs.”

There’s a strange thing about it, though. There is no parallel campaign against the state’s other co-chairman, Vancouver Mayor Timothy Leavitt. In fact, organizers of the national campaign say they haven’t heard of anything like it in any of the other 23 states in which they have established local chapters. 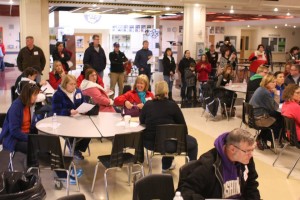 Meanwhile, WEA targeted Hobbs as it launched a $175,000 “Paramount Duty” advertising campaign the last week of March, to build support for the billion-dollar-or-more increase in K-12 spending that has been mandated by the state Supreme Court in its McCleary decision. There is a squabble right now in the Legislature about tax increases, to be sure, but the education battle really isn’t about money. All parties are agreed they are going to have to spend until it hurts. It’s just that in the Senate, the Republican-leaning Majority Coalition and a slim-to-broad swath of Democrats have been lining up behind education reform bills the union sees as a threat. As many as 35 senators have voted yes on the more controversial measures, an indication of bipartisan support.

The union’s effort has singled out Tom, and that might be par for the course, given his leadership role and the fact that he has made himself a spokesman for the reform effort. The union’s online petition is addressed to “Sen. Rodney Tom and the Legislature,” and it accuses him of “promoting misguided education bills that do nothing to reduce class sizes.” It might be noted that the reduction of class sizes means the hiring of more teachers. The House Democrats’ budget provides $225 million for the purpose; the Senate budget does not.

The odd thing about the WEA campaign is its secondary focus on Hobbs. He was the only Democrat, other than Tom, to be featured on a widely circulated union flier denouncing the “Rodney Tom Six” – even though the “Rodney Tom 35” might have been just as appropriate. The other four were Republicans, also from suburban Puget Sound-area swing districts – Bruce Dammeier of Puyallup, Joe Fain of Auburn, Andy Hill of Redmond and Steve Litzow of Mercer Island. The four Republicans say they were hammered by teachers at town hall meetings last month, but there was no doorbelling. Lobbying reports on file at the state Public Disclosure Commission show WEA spent an additional $10,000 for activities in the districts of Hobbs and Tom. Teachers left fliers denouncing Hobbs at a thousand Snohomish County homes. Hobbs was livid when a group showed up at his door. One was his son’s teacher. 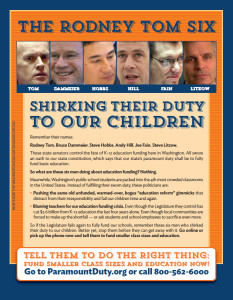 “Teachers from Lake Stevens and Snohomish have spent a lot of time and effort trying to educate Sen. Hobbs about the need to reduce class sizes. After all, Washington has the fourth-most-overcrowded class sizes in the country, and under the Supreme Court’s McCleary decision, the state must dramatically reduce class sizes by 2018.

“Sen. Hobbs, however, voted for a Senate budget that has zero funding to reduce class sizes as the Supreme Court has ordered.

“We hope that Sen. Hobbs will listen to teachers, parents and voters in his district and support a final budget that begins to reduce class sizes so all children can get the quality education they deserve, no matter where they live and regardless of family background.”

Looking Ahead to Election 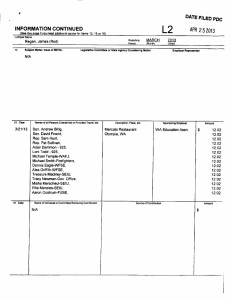 Alliance lives on: PDC report details March 21 lunch meeting, including representatives of the progressive coalition, the governor’s office and the House and Senate Democratic leadership.

Of course, the whole thing seems a bit more forward-looking – in the direction of 2014 – if you consider what happened in the past. Back in 2010, Hobbs was one of two top targets for what you might call the state’s progressive coalition. The big money for Democratic campaigns in this state is funneled through five organizations – the Washington Education Association, the Service Employees International Union, the state Labor Council, the Federation of State Employees and the Washington Association for Justice, which represents the state’s trial lawyers. With an avalanche of mailers, robocalls and a phony campaign that built up a hopeless Republican candidate, the coalition managed to knock out another Roadkiller, moderate Sen. Jean Berkey, D-Everett. And with $104,000 in independent-campaign spending, the same interests came within inches of doing the same to Hobbs. He won by just 936 votes. Even after Hobbs defeated the preferred Democrat in the primary, WEA spent $5,000 promoting the Republican candidate in the race.

Lobbying reports suggest that the alliance lives on even now, when legislative policy is the issue, not campaign work. A report filed by WEA lobbyist Rod Regan last week shows the union picked up the tab for a luncheon at the Mercato restaurant in downtown Olympia March 21, just as the Paramount Duty campaign was launching. In attendance were representatives of the House and Senate Democratic leadership and the office of Gov. Jay Inslee, as well as SEIU, the federation, the trial lawyers, the firefighters’ union and the activist group FUSE Washington. While it might be considered a breaking of bread between political allies, something that certainly happens on both sides, the timing is interesting. Records show FUSE paid $12,000 March 31, just a few days later, for a poll that concluded Democrat Tom could be beaten. 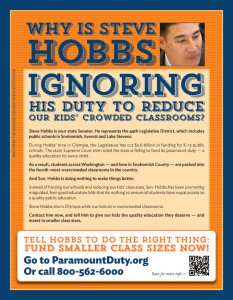 Distributed door-to-door in the 44th.

Hobbs, an army vet who participated in the Iraq and Kosovo deployments, likes to draw analogies with his military career. He broke his leg on the obstacle course but kept on running until he was ordered to stop. They told him his eyesight wasn’t good enough for the Airborne, but he memorized the chart, got back in line and faked it. “If they want me to drop out, this is the worst way of doing it, because I’m not the kind of guy who gives up.”

Yet he says he is worried – and he probably has every right to be. “This is a tough business and when you are from a moderate swing district, they know you are a weak link and they are going to come after you. Especially if you are the type of person who not just takes the hard votes but actually is leading the effort against these organizations, whether they be on the far left or far right.”

Hobbs got it this session from the right, too – he co-sponsored the Reproductive Parity Act, a measure requiring insurers to pay for abortion, and that made him a target for the Family Policy Institute. He is a rare lawmaker who earned the identical score last year from both the Association of Washington Business and the Washington State Labor Council, 67 percent. But he isn’t the only one with a down-the-middle record. So again — why Hobbs?

His goes-both-ways district aside, it might be that he’s not a rich guy. He acknowledges his house is underwater. He doesn’t come from family money. And unlike many in the Legislature, he doesn’t have a lucrative outside career, just a posting in the National Guard. Which makes him a bit more vulnerable than most. A guy who stands in the center stands alone.

“These groups want 100 percent compliance and they are willing to go to the extremes to make you stay in line,” he says. “They’re willing to spend money and give talking points and misinformation to your constituents. You almost feel helpless because you don’t have a big P.R. machine – nobody’s putting gobs of money into a 501(c)(3) advocating on my behalf.”

The Washington Community Action Network gave him a deadline: He was supposed to resign from Fix the Debt by last Monday, or face the consequences. He sent a polite letter saying no. So far he hasn’t heard back.