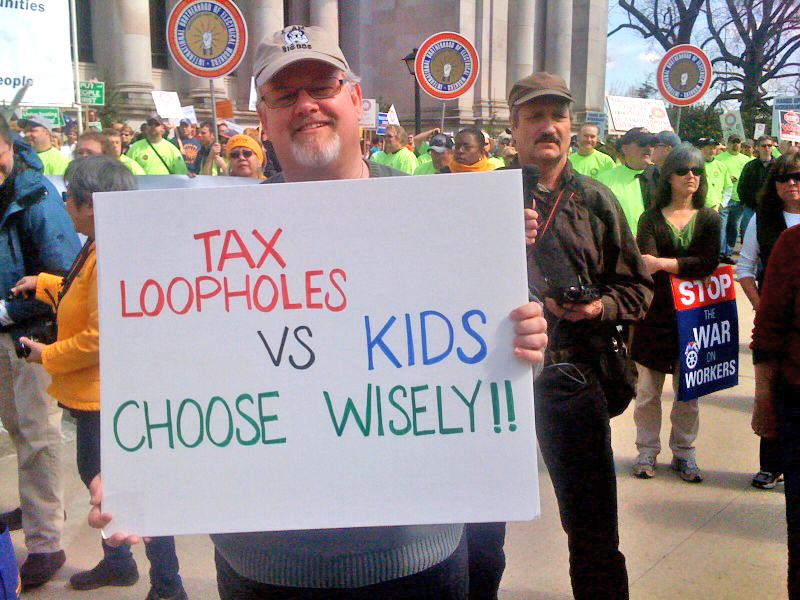 While Labor Argues Against Business Tax Loopholes, Unions Enjoy a Big Tax Break of Their Own

Labor Unions Don't Pay B&O Tax, But No One Seems to Know About This $9 Million Break 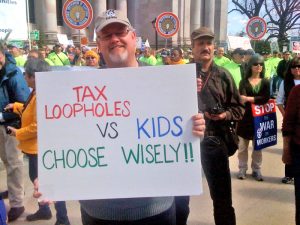 From the April 8 labor rally.

OLYMPIA, May 18.—When labor unions attack tax loopholes, they must not mean their own.

Labor unions in this state enjoy a massive tax exemption that costs taxpayers millions of dollars annually – just like the business tax breaks they have been attacking before the Legislature this year. Not that there’s anything necessarily wrong with the fact they escape one of the biggest state taxes around. But it certainly casts a different light on the shared-sacrifice argument unions and their allies have been raising against business tax breaks this year. They’ve been saying that if state services have to be cut this year, business ought to pony up more.

Odds are union officials themselves don’t realize the same argument could be used against them. That’s because many of their friends and allies on the left are denouncing the very tax break that helps save labor’s bacon. The whole thing is actually quite a bit more complicated than most of the business exemptions they’ve been thundering about.
But the effect is the same, and here’s the bottom line: Unions don’t pay the state business and occupations tax. At current tax rates, the exemption saves them somewhere in the neighborhood of $9 million a year.

And while their big argument is that many longstanding business tax breaks no longer serve their original purpose, the same question might be asked about this one. It dates back 76 years, to a time when labor unions were just taking hold, and labor groups were seen in the same light as the Kiwanis Club and the Boy Scouts. Certainly they weren’t the big businesses they are today, with perhaps a half-billion dollars in revenue from union dues every year in this state alone.

Lawmakers are startled to hear about the union tax exemption and say it ought to stand this year’s debate on its head.
“When you start talking about loopholes, you should talk about all of them,” said state Sen. Mark Schoesler, R-Ritzville. “The hypocrisy of some union bosses never surprises me.”

Just don’t hold your breath waiting for the Legislature to repeal this one.

To be totally fair about it, business trade associations get a big break on B&O taxes, too. That may be why you don’t see business lobbyists getting on the soapbox about it. But what business groups save is chicken feed by comparison, and they’re not the ones arguing that tax breaks ought to be canceled.

There’s another reason nobody seems to know about this one. The union tax break doesn’t show up anywhere in the law or in the Department of Revenue’s reports on tax exemptions.
It dates back to a 1935 decision by the Washington Tax Commission, the predecessor agency of the Department of Revenue. The commission took the position that unions weren’t businesses and collective bargaining was not a taxable business activity.

If it wasn’t for that decision, it’s pretty clear that the tax would apply. The law defines business activities as “all activities engaged in with the object of gain, benefit, or advantage to another person or class, directly or indirectly.”

It’s about as clear a description of labor negotiations as you’re likely to find.

Washington isn’t alone. States typically don’t tax labor unions, but for a different reason. That’s because federal law specifically exempts labor unions from income tax under the U.S. Code, section 501(c)(5). Most states impose income taxes of their own and mirror federal law in doing it, right down to the same list of exemptions.

But Washington doesn’t impose an income tax and so its tax code is wildly different. Back in the thirties, after the state Supreme Court tossed out an income tax as unconstitutional, lawmakers crafted the business and occupations tax as a substitute.

The key thing about the B&O tax is this: It is a tax on gross receipts, not profits. That’s one of the biggest beefs from business. Unlike most states, this one taxes organizations as long as they have revenue, regardless of whether they make a profit. Of course, the law also provides a long list of exemptions and special tax rates for specific groups and industries granted over the years – more than 500 of them, if all taxes are considered. That’s what the unions have been complaining about.

The twist? Labor unions are non-profit corporations themselves, and they are among the biggest around. According to 2010 figures from the Bureau of Labor Statistics, there are 604,300 union members and represented employees in the state of Washington. No one compiles exact statistics on the union dues they collect, but the amount is huge.

A Half-Billion in Revenue

In the absence of precise numbers, the National Right to Work Legal Foundation, an organization critical of labor-union organizing practices, helps with a bit of math. Federal stats say Washington’s unionized workers earn an average of $1,068 a week. Union dues typically run one to two percent of gross income. If you figure it at 1.5 percent, that means Washington-state unions collect $503 million a year in dues.

So at the current services B&O rate of 1.8 percent, the tax break is worth $9 million annually. It might be off a million or so either way, but that’s about as close as anyone can come.

Labor’s push to end tax breaks in this state makes perfect sense, says the foundation’s Anthony Riedel. Unions don’t pay taxes, so they don’t see any harm in arguing that business ought to pay more. “More than half the employees in government are unionized, so it would make sense for them to push for more taxes,” he said. “It’s a vicious circle.”

Washington may be higher. According to academic research posted on unionstats.com, 56.8 percent of total union membership in Washington is in the public sector.

Not Really a Tax Break

Jeff Johnson, president of the Washington State Labor Council, makes the obvious argument. If the Department of Revenue has made a decision that unions shouldn’t be taxed, can you really call it a tax break?

“I don’t see the relevance, since most of what we do is not considered taxable,” he said.

But the tax exemptions that show up on the official books – Johnson says those are different and fair game for criticism.

The tax exemption for labor unions has gotten just a smidgeon of official scrutiny – not from the Legislature, but the auditor’s office. It started with a whistleblower complaint filed by a disgruntled Department of Revenue employee in 2007. The unnamed worker noted that at least one union hadn’t registered with Revenue and recommended to his supervisor that a “business activities questionnaire” be sent asking about its tax status. Managers blocked it.

The audit stopped short of finding anything wrong, but it did bring out a few curious facts about the way the exemption works. Revenue says labor unions ought to register with the department, but most of them don’t bother, and state tax officials don’t pursue them because they don’t believe unions are subject to tax. Revenue argues it is “not a wise use of tax resources.”

The auditor’s report pointed out that because unions don’t register, “the department is unable to determine if tax would be due from business activities such as collection of sales tax on promotional items.”

And the auditor’s office asked an obvious question: What about dues revenue that doesn’t go toward collective bargaining services? Things like lobbying the Legislature?
To end business tax breaks, for instance.

Revenue officials thumbed through their tax manuals and found an exemption that applied. It was another vintage-1935 classic. This one allows a B&O tax deduction for membership fees and dues, as long as the dues and fees pay for a business activity. Lobbying is a business activity. So one way or the other, Revenue argued, unions don’t have to pay. And while this one is supposed to be a deduction from reported taxes, if unions don’t have to pay taxes, they don’t have to file reports.

No doubt the reasoning will come as a surprise to the Legislature. In 2007, the Joint Legislative Audit and Review Committee produced a report about that same membership fees-and-dues tax break. It listed all the types of groups that get it. Labor unions weren’t among them.

It doesn’t show up in Revenue’s official quadrennial report about tax exemptions, either. It estimates the value of the dues-and-fees tax break at about $1 million a year. That’s where the business associations come in, but they’re barely a blip – the tax break encompasses a half-dozen types of dues-paying membership organizations. A lobbying flap last year established that about two-thirds of the tax break goes to the triple-A.

What’s important here is that Revenue’s figure doesn’t count labor unions. The department doesn’t have any numbers, of course. Still, there’s not even an asterisk in the report indicating that unions are credited with the tax break, so there’s nothing anyone might catch.

Which helps explain why the Legislature doesn’t seem to know about labor’s tax exemption, and why no one called the unions on it this year when labor lobbyists testified in favor of a sweeping review of tax breaks for business. “It’s true, nobody knows they have a huge tax break,” said state Rep. Bill Hinkle, R-Cle Elum. “You just look at how their membership has grown – it’s amazing how many people are paying dues.”

The funniest thing about the story is that the anti-loophole campaign backed by labor and its allies this year takes dead aim at the very tax break that gets unions partway off the hook. They call it the “country club loophole,” and they describe the membership-dues-and-fees deduction as a massive giveaway to fatcats. Often they confuse the B&O tax with the sales tax.

At the Labor Council news conference announcing the enormous labor rally at the Capitol April 8, the Rev. Paul Benz of the Washington Association of Churches called it one of the most egregious of the state’s tax breaks: “I’m thinking of one that I just want to lift up as an example, the sales tax exemption for country club members.”

If you were at the rally that day, you might have seen the Fuse Washington flier denouncing the country-club loophole – it seemed to be everywhere. Just this week the progressive activist group highlighted the tax break on its “livinggreedy.com” website, with pictures of gray-haired golfers on the links. It explains, “Closing the sales tax loophole for country clubs would save $2 million every two years, enough to prevent reductions in school meals for thousands of kids.”

Meanwhile in the Legislature, Senate Democrats made it part of the war on tax breaks they announced last month. State Sen. Jeanne Kohl-Welles, D-Seattle, has introduced a bill that would partially eliminate the tax deduction, correctly identifying it as a B&O break. Senate Bill 5932 takes aim at golf clubs and physical fitness clubs, she explained. “They may be very important to some parts of our society, but are they more important than covering essential services? Making sure that families have a roof over their head and are able to have health coverage and be able to eat?”

But unions have nothing to fear from that one. If you read the fine print, the bill retains the exemption for any organization that gets a tax break from the feds under 501(c)(5).