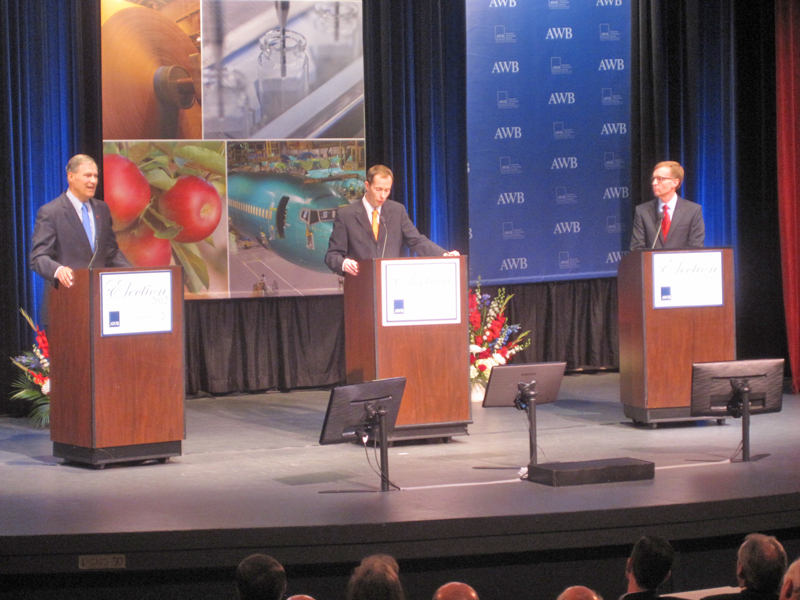 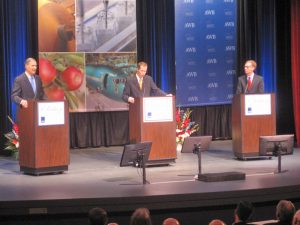 Democrat Jay Inslee and Republican Rob McKenna appear onstage  for a debate June 12 in Spokane — where the whole notion of a no-new-tax campaign pledge got started.

OLYMPIA, April 2.—Gov. Jay Inslee, chided and derided since last Thursday by those who believe a promise is a promise, can probably rest a little easier today. It has been five long days since Washington’s new chief executive proposed raising taxes by $1.2 billion. And in that time not a single smoking-gun recording has surfaced of him making that no-new-tax promise that was reported ten thousand times during last year’s campaign.

Every time Inslee talked taxes on the campaign trail last year, there was a tricky adjective or two, an odd choice of verb tense, a qualification or a quibble that made it something less than an actual promise. Or else it sounded like a promise when it really wasn’t. Washington State Wire, and no doubt many other media outlets, has been going over the tapes of the new governor’s recorded campaign appearances from last year, and can’t find a single point where Inslee came out in an unquestionable way and said he wouldn’t do what he did last week.

And it’s why Inslee could make the claim he did last Thursday: “I am doing today exactly – exactly – what I said I was going to do if I was given this great responsibility of being governor.”

That’s a bit of a stretch, of course – Inslee never explained exactly what he planned to do, on taxes or really any other subject, and while he said he would find money to pay for court-mandated K-12 spending, he certainly never suggested a tax plan like the one he suggested last week.  Jaded political types might wonder if it matters at all: It’s not as if anyone expects politicians to fulfill their campaign promises.  If it really was a promise, everyone expected Inslee to break it, both political foes and allies alike. For Inslee to claim he could launch a job-creation program and make government more efficient and immediately raise $1 billion or more strained credulity. You might say his proposal last week proved the skeptics right, it couldn’t be done. Yet Inslee insists he hasn’t broken a single promise. And in a trade where voters expect politicians to kinda-sorta tell the truth, and there is supposed to be a modicum of consistency between campaign speeches and what transpires after the election, you might say there’s at least a little ‘splainin’ to do.

All Taxes are New 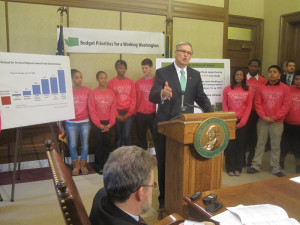 For Inslee to maintain he is keeping the faith requires him to thread a mighty slippery needle. He is proposing a $3.3 billion increase in state spending, if the “near general fund” figures are compared, at a time when state tax revenues are growing by only $2 billion. There is no inconsistency when it comes to his war on loopholes — he is proposing the elimination of $565 million in tax exemptions. Ending an exemption is the same thing as raising a new tax, under the definition commonly used by the Legislature, yet Inslee did promise to whack loopholes during the campaign. He just never named a dollar figure or the specific tax breaks he would target.

But by the Legislature’s definition, the other key element also represents new taxes — the reimposition of $661 million in temporary taxes imposed in 2010 that were scheduled to expire in June. They include a 50-cent-a-gallon beer tax, and a surcharge on business and occupation taxes on service businesses, accountants, doctors, lawyers, architects and others. Inslee never mentioned that idea during the campaign – indeed, the idea first surfaced when Gov. Christine Gregoire proposed a budget on her way out the door last December, and Inslee didn’t announce his support until the day after he took office. Because those taxes are set to go away, there’s no question – if the Legislature raises them again, they are new taxes.

But Inslee insists they are not. “The amount people will be spending for beer is the same tomorrow as it was yesterday, so I am fulfilling my commitments to a T.”

As President Clinton once said, it all depends on what the definition of is is. So what exactly did Inslee say during the campaign?

Got Started With AWB Debate

The idea that Inslee promised not to raise taxes got started with a debate last June 12 between Inslee and Republican candidate Rob McKenna, sponsored by the Association of Washington Business — a bit of state theater held at the old State Theater in Spokane. Moderator Austin Jenkins asked, “If elected governor, are you prepared to ask voters to support a new tax for schools? You have 90 seconds.”

And Inslee responded, “No, I’m proposing a different avenue, which is job creation – to get those 280,000 [unemployed] people back to work so that we can increase revenues to fund education, and embracing lean-management techniques to bring efficiency to state government, and embrace preventive health care so that we can reduce the rate of inflation, and then close some of those corporate tax loopholes.”

A rather different approach than what he outlined last week, to be sure, but not quite a no-tax promise. So in a follow-up Jenkins tried to nail both candidates down. “Are you, here and now, both of you, taking this possibility of a ballot measure for a dedicated funding source for education off the table? Is that your stance?”

Inslee’s response? “Well, yes. I’m proposing that we build our economy to get these 280,000 people back to work, that we embrace an innovative economy and rebuild our tax base that way. We can do what we always have done, which is to finance our schools through growth, and I think realistically the only way that we are going to get the job done.”

What established the perception that Inslee was making a promise was more likely Jenkins’ next comment: “So it sounds like taxes are off the table for you.” Inslee didn’t have a chance to respond, though one might wonder if he would have clarified his stand – he had plenty of opportunities to do so during the next five months, and he never did.

A Perception That Snowballed

From that point on, it became a matter of campaign-reporting dogma that Inslee was promising not to raise taxes. His campaign never bothered correcting any reporter who reported it as fact. And Inslee did his best to fuel it. During subsequent televised debates with McKenna, Inslee used the phrase “I am not proposing a tax increase” at least twice, and words similar to it many other times. He also said, last Oct. 3, “I don’t believe that tax increases are the right route forward for our state.”

Neither of those statements might be considered a definitive promise, however. A frustrated McKenna, at an Aug. 30 Vancouver debate, said drily, “You will notice the congressman’s careful parsing of language here. It may sound familiar to you because it is almost exactly what Gov. Gregoire said – ‘I am not proposing a tax increase,’ present tense, and that is what she said. She got elected and reelected and then she proposed a tax increase.”

So reporters kept trying to get Inslee to clarify his stand – or at least use the future tense. The clearest he ever got was this statement, which followed a debate Oct. 11, reported in the Seattle Times. After dancing around reporters’ questions, Inslee finally allowed, “I would veto anything that heads in the wrong direction, and the wrong direction is new taxes in the state of Washington.”

Of course, that left Inslee plenty of outs. A promise to veto a tax increase implies that the proposal comes from the Legislature, unless one thinks that Inslee was promising to veto himself. And there was the idea Inslee expressed last week, that a new tax isn’t a new tax if it continues an old one. But the odd thing was that the Inslee campaign maintained he had been forthright and clear about everything. For instance, there was an Oct. 3 press release from the Inslee campaign in which spokeswoman Jamie Smith denounced the Republican candidate for “cynical rhetoric” and said he had a “growing record of misleading voters about where he stands on issues like taxes and health care. Voters, fortunately, are seeing right through it.”

Cynical rhetoric? Might have been a case of the pot calling the kettle black. In retrospect, one of the more honest moments of the campaign may have come June 12, when an Inslee intern by the name of George Rowe posted a comment on a UW Young Democrats Facebook page. Rowe observed, “You don’t win on a platform of raising taxes. You win and then do it anyway.”

Last week, there was plenty of carping from Republican quarters that Inslee had broken his promise. “If you’re going to promise not to raise taxes to get the job, you better have a plan to get the job done without raising taxes,” said Sen. Doug Ericksen, R-Ferndale. But if Inslee’s promise had enough holes to drive a truck through, the real problem might have been that Washington’s elected leader failed to prepare an elegant out, as fellow Democratic Gov. Mike Lowry did 20 years ago. During his 1992 campaign, Lowry said he would never be so foolish as to make a no-tax promise, but tax increases certainly would be a last resort.

And 14 days and 17 hours after Lowry won the election, once a November 1992 tax-revenue forecast revealed the teeniest of problems – a slight worsening of the state’s revenue picture by $100 million – the governor-elect explained that the world had been stood on its end. A tax increase would be needed. “I didn’t say one thing that I haven’t said before during the campaign,” Lowry maintained. “I don’t see a way out of the last resort of finding new revenues.”

There wasn’t a soul who was surprised by Inslee’s proposal, said Randy Pepple, McKenna’s former campaign manager. And the whole play was so clear that it’s not even worth saying told-you-so. “The point I will make is that everyone who followed the campaign expected Jay Inslee to raise taxes,” Pepple said. “That’s what he has done as a state legislator and that’s what he has done as a federal legislator. Traditionally Democrats have gotten elected in this state by promising they won’t raise taxes and then raise taxes, because that is what their interest groups want them to do. The people who paid to elect Jay Inslee demand that he raise taxes – the WEA, the state Labor Council, the environmentalists, the trial lawyers – all of the groups that put their money behind Inslee and fund the Democratic party demand more revenue.”

The cynical part wasn’t letting people believe he wouldn’t raise taxes, Pepple said – it’s the idea that his plan will fund education. That’s because the constitution says K-12 education funding has to be the state’s top priority — of course the schools get their money. “It is the rest of the budget that Jay Inslee is growing. He got congratulated by the people who put their money on him, so I am sure they are very happy with their return on their investment.”