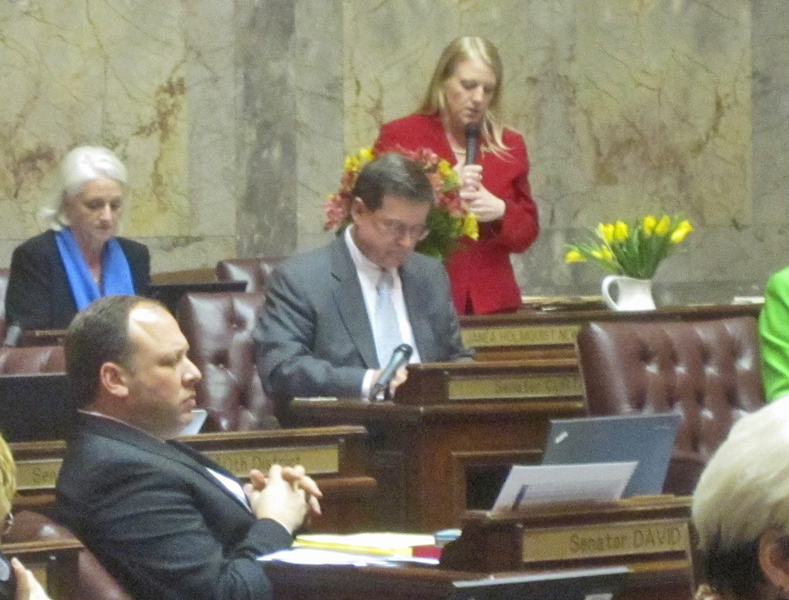 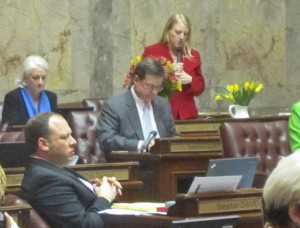 Immediately they moved to take over the chamber.

While minority Democrats say they were making an important political point, outraged members of the Republican-leaning Majority Coalition Caucus say a greater principle of basic human decency is involved. They say they are incredulous that the Senate Democratic Caucus would take advantage of a situation created when a mother left to breastfeed her child.

“I think it is shameful for them to make her choose between being on the floor and voting and nursing her child,” said state Sen. Ann Rivers, R-La Center. “This caucus, which presents itself as being the caucus of families, would willingly drive a wedge between a mother and her infant? I think that is shameful. Just shameful. And deeply disappointing.”

The incident reflects the frustration Democrats feel this year after a takeover in the Senate by a coalition majority that has left them at a one-vote disadvantage. But it presents an enormous irony. It came on the 20th anniversary, almost to the day, of a similar case that turned the Washington Legislature upside down and forced legislative leaders to concede they had been insensitive toward working mothers. At the time Democratic leaders declared that some things are more important than politics and it offered a symbolic moment of triumph for women’s groups in what was then called the Year of the Woman. That case involved a Democrat, Lisa Brown, who rose to become leader of the Senate Democratic Caucus. Brown retired last election and her caucus is under new management.

Holmquist Newbry declines comment on the incident. But what happened Tuesday was clear enough. During a mid-afternoon session, as the Senate was debating a routine series of bills, Holmquist Newbry left the floor to care for her four-month-old son Makaio, who had been brought to the women’s lounge off the Senate floor. Sen. Jim Honeyford, R-Sunnyside, moved to excuse Holmquist Newbry from voting. That meant the majority coalition had 24 votes, not 25, and they were tied at least temporarily with the Senate Democratic Caucus.

Sen. David Frockt, D-Seattle, took advantage of the moment. He rose to demand an immediate vote on a bill sponsored by a Democrat that did not appear on the afternoon schedule.

The unusual motion quieted the chamber. Members rushed to their seats. Frockt demanded a roll-call vote. The assumption was that Lt. Gov. Brad Owen, a Democrat, would cast a tiebreaking vote to advance the bill to the floor.

Members of the Senate Democratic Caucus voted yes as their names were called. Members of the Majority Coalition Caucus voted no. And just in time, Holmquist Newbry emerged from the lounge to cast her vote. The motion failed 25-24. 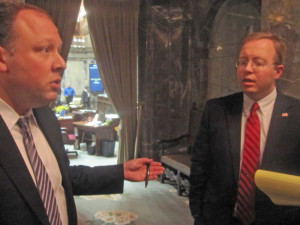 Democrats said the real issue is that the Majority Caucus is quashing a bill that deserves to pass. Senate Bill 5592, sponsored by Sen. Nathan Schlicher, D-Gig Harbor, would limit the amount of toll revenue on the Tacoma Narrows Bridge that can be spent on administrative overhead. The bill had strong bipartisan support in the Senate Transportation Committee, where it was approved 11-1. The measure has advanced within the internal processes of the Senate Rules Committee to the point that a vote might be taken, but it has not been placed on the Senate floor calendar.

Yet there are plenty of other bills in the same boat. Today is the deadline for the House and Senate to take action on bills that originate in the respective chambers, and frantic lawmakers of both parties spent Tuesday trying to round up support for remaining bills that have not yet received a vote. Sen. Schlicher’s bill still might have emerged: The Majority Coalition in the Senate has made it a policy to ensure that all Democratic members are able to pass at least one bill. Schlicher, a freshman who was appointed to take the place of former Sen. Derek Kilmer upon his election to Congress, was one of only two Democrats who have not yet passed a bill in the Senate.

But now prospects for Schlicher’s bill seem rather dimmer. Members of the majority coalition – 23 Republicans and two Democrats – say they are aghast. Holmquist Newbry is one of the more prominent members of the majority caucus because she is chairwoman of the Commerce and Labor Committee, and the fact that she is nursing a newborn is well-known in the upper chamber. She has been excused from voting before.

And in the Senate, where collegiality is the rule, it is tradition for a member of the opposing party to cast a vote for a member of the other team when that member is indisposed for good reason. This session, for example, state Sen. Jim Hargrove, D-Hoquiam, cast a vote for state Sen. Mike Carrell, R-Lakewood, who was absent because he is being treated for a pre-leukemic condition.

Frockt said he was unaware of the reason for Holmquist Newbry’s absence. He just knew that when Honeyford made his motion to excuse her, the majority caucus was down a member. “I didn’t know her baby was here,” he said. “I didn’t know she was nursing. All I knew was that they had a member who was absent from the floor.”

Certainly he wouldn’t have made the motion if he had known, he said. “In a 25-24 situation, this is the kind of thing that could happen.”

The incident might have escaped attention if it hadn’t been for the fact that the Democrats issued a press release condemning the majority coalition for failing to take action on the bill – a signal that the procedural vote will figure in Schlicher’s campaign for election this fall. In the release, Schlicher said, “I have to ask what the Republican majority has against a bill that would limit administrative costs on the Tacoma Narrows bridge and help keep tolls low for our citizens.”

Republicans say they are dumbfounded that Democrats maintain they didn’t know the reason for Holmquist Newbry’s absence, and they are doubly dumbfounded that the other team would use the situation for a routine political attack. Fain said the Majority Caucus approached the Democrats weeks ago to seek accommodation for Carrell and Holmquist Newbry, in accordance with Senate traditions, but the Democratic Caucus responded by demanding votes in favor of Democratic bills. Last week, when Holmquist Newbry was excused to nurse her child, Fain said he noticed Democrats diving for their microphones – and so he immediately moved to adjourn the session.

The case is particularly curious when one considers what happened 20 years ago on the floor of the state House of Representatives. In that well-remembered incident, former Sen. Brown, then a freshman serving her first year in the Legislature, brought her year-old son Lucas onto the floor while the House was holding an evening session. It happened March 16, 1993 — the day before that year’s cutoff deadline. Brown explained that she was unable to find a baby-sitter. And while she sat with young Lucas in her lap, feeding him from a bottle, she got a call from House Chief Clerk Alan Thompson on the phone at her desk on the floor, asking her to remove her child. Thompson said a member had complained that the presence of a child on the floor was unseemly. A national furor ensued and it became the most memorable event of the 1993 session. Shamefaced leaders in the Washington Legislature declared that mistakes had been made, and the case raised the consciousness of the need to accommodate mothers who are active in the political arena. One key point: Brown was a Democrat, and the incident was used to rally the party faithful.

So why is it different when a Republican is involved? Rivers asks. “There seems to be a different standard today, doesn’t there? A much different standard. I will say this. Their behavior is shameful, but I also am ashamed that I put so much stock in them that I thought they would never do something like this. So shame on me.”

Fain said a number of Democratic members apologized to Holmquist Newbry after the move on the floor. “I am heartened by that,” he said.