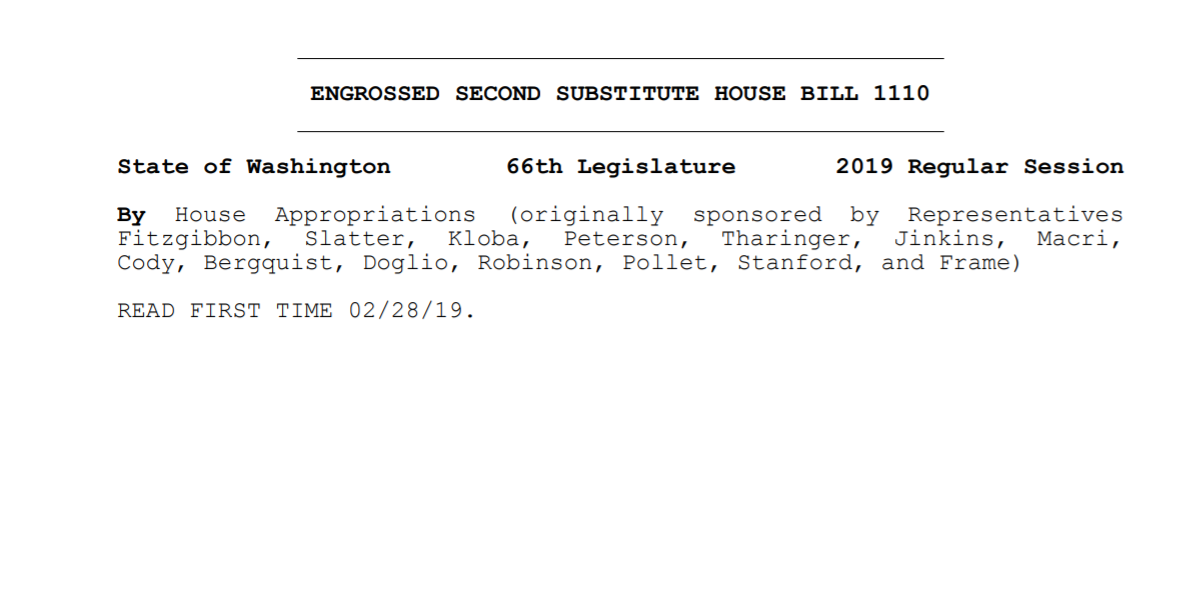 What’s next for a low-carbon fuel standard

Fitzgibbon and Saldaña sponsored companion bills last session that would’ve created a standard, both of which stalled in the Senate.

The most recent version of the bill, which passed out of the House, directs the Department of Ecology to establish a program that limits carbon intensity of transportation fuels used in Washington in order to bring transportation fuel-related greenhouse gas emissions to 10% below 2017 levels by 2028 and to double that percentage by 2035.

Among its exemptions: fuel exported from the state, electricity, and fuels used by aircraft, vessels, and trains.

The bill, which is eligible to bypass the committee process in the House next session, also tasks DOE with creating a credit system in which low-carbon fuels and activities like carbon sequestration could earn credits. That system could look like systems already in place in Oregon and California.

Under the Oregon Clean Fuels Program, for example, businesses that opt in can generate credits when they provide fuel with a lower carbon intensity than the standard in place for the fuel (e.g. gasoline or diesel) it’s a substitute for. An example of a “credit generator,” according to the state’s Department of Environmental Quality, is a business that owns electric vehicle charging stations.

Fuels with a carbon intensity above the clean fuel standard for the year generate a deficit for businesses regulated by the law. Those businesses have to comply with the state standards by balancing their credits and deficits each year — if a regulated party doesn’t have enough credits to make up for their deficits, they can purchase credits from credit generators.

Rep. Fitzgibbon, who also sponsored clean fuel-standard legislation in 2018, said in the briefing that he saw success this year in promoting his bill as a “triple bottom line.”

“I think we made really tremendous progress in showing the importance of reducing greenhouse gas emissions from transportation fuels, as well as supporting rural economies by growing the opportunities to produce energy in rural, economically struggling parts of the state, as well as to fight air pollution in urbanized parts of the state, where the…communities most highly impacted by air pollution from transportation fuels tend to be low-income communities, which are located close to busy and congested highways,” Fitzgibbon said.

In order to get the bill through the Senate, Sen. Saldaña mentioned a few priorities for the interim, including shaping work sessions for the Joint Transportation Committee, defeating an initiative from Tim Eyman at the ballot, and continuing to educate Senate Democrats on the standard.

Saldaña said that the Senate, historically, has connected a clean fuel standard with its transportation package. Having the two connected or separate, she said, are both options.

“…either making really clear the case of how both of these can move separately and why clean fuels needs to lead is really important,” Saldaña said. “And/or making sure that we’re doing the work to figure out how can we actually do a green transportation package and have clean fuels be a centerpiece of that.”

When asked whether there would be any economic modeling done this interim to address those concerns directly, the legislators said that isn’t part of their plans. Fitzgibbon said economic modeling for a “technology neutral” standard like this — a standard that doesn’t mandate what’s used to reduce emissions and sets up a marketplace for trading credits — would be “very challenging.”

“We don’t have a plan to commission a new study beyond the review that’s already underway in Oregon and California of the very modest, if any price impacts there have been for the standards down there,” Fitzgibbon said.

Rather than modeling, Saldaña mentioned exchanges with the business sector and engaging with more stakeholders this interim as a priority.

“Everyone is moving goods,” Saldaña said. “Our state is so dependent upon both our external trade with other countries and other states and internally. Moving goods is what moves — you know — so much of our economy.”

She brought up the point after Cam LeHouillier, Manager of Energy Research and Development at Tacoma Public Utilities/Tacoma Power, said the standard could energize local knowledge and control.

An example he gave: some utilities customers currently want to electrify their fleets, but costs up front to do so are prohibitively high.

“With a low carbon fuel standard, it can put money in the hands of the utility that they can re-invest in the local community, get the charging infrastructure put in place that helps the customer make the transition for their fleet,” LeHouillier said. “It could take a business case that just doesn’t pencil out and make it pencil out.”

Fitzgibbon made clear that lawmakers will push to get the bill across the finish line next session. In the meantime, the Puget Sound Clean Air Agency — which covers King, Kitsap, Pierce, and Snohomish Counties — has adopted more aggressive greenhouse gas targets than the statewide bill looks to adopt.

Unlike the state, the agency is analyzing economic impacts, as well as air quality impacts of a clean fuel standard. It’s moving forward with rule-making for a regional clean fuel standard and plans to have a public hearing on a draft rule in Seattle on October 7, 2019.