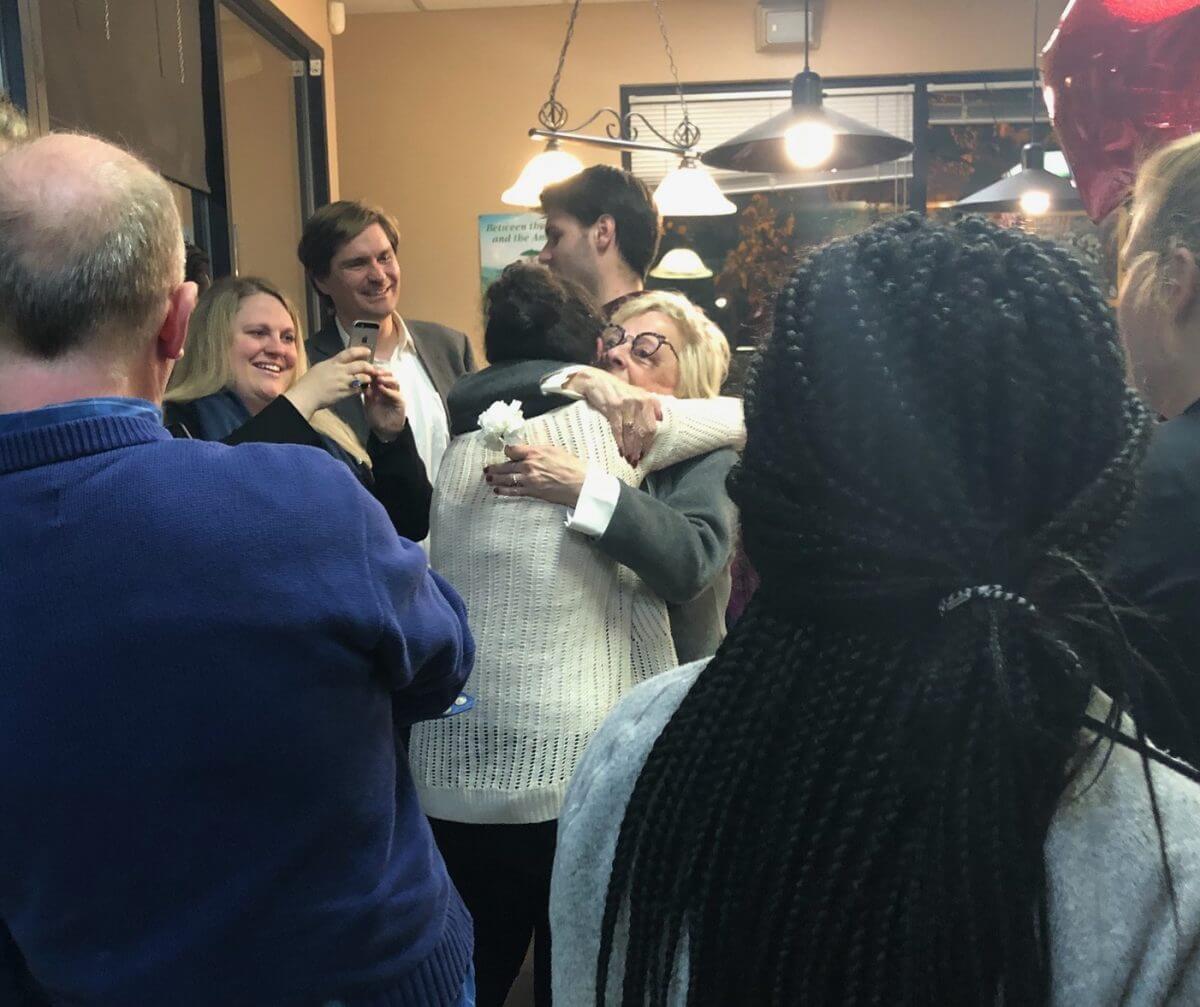 What election night felt like in Washington’s 30th LD

Going into Election Day, the 30th LD Senate seat was seen as a battleground. Republican incumbent Mark Miloscia beat his Democratic challenger, Claire Wilson, by 10 points in the primary. But almost 14 points went to another Democrat.  The combined Democratic vote count suggested Miloscia would have a tough fight on his hands.

Just before preliminary results were released, I headed to Federal Way to find out what battleground tension feels like on the ground.

Shortly after I pulled off I-5, a group of sign-wavers greeted me. They enthusiastically hoisted signs for Claire Wilson, Mike Pellicciotti, and Kristine Reeves — all three Democratic candidates for state legislature in the district — but where were the signs for incumbent Sen. Mark Miloscia?

I emailed Miloscia’s assistant campaign manager, Logan Beck, to see where I might track them down:

“We stopped sign waving at 2. We are in full GOTV mode right now at the phone bank. Sorry,” he responded.

I eventually met with Miloscia at a watch party for 30th LD Republican candidates. He joined a subdued group of about 20 or 30 people. They were sitting around tables in an American-food restaurant, waiting for results to come in. One TV showed Fox News, the other KCTS 9. When I asked Miloscia how he was feeling, he immediately responded,

In a time when toeing the party line is the norm, Mark Miloscia is a unique character. This year, he’s running to keep his seat as a Republican. But much of his past is blue: He served as a State Representative for seven terms as a Democrat, until 2013.

In 2012, he ran for State Auditor as a Democrat and came in last in a four-person primary. In 2014, he officially switched parties and won his Senate seat as a Republican. Now, he’s fighting to keep it.

Miloscia considers himself a moderate Republican. He’s faced criticism from the left for his positions on social issues like abortion and LGBTQ rights. He’s called himself “unabashedly anti-abortion” and co-sponsored a bill that would’ve repealed a rule allowing transgender people to use public restrooms that correspond with their gender identity. He also co-sponsored a bill to end the death penalty last year and voted against the bill that would’ve limited public access to legislators’ records.

His challenger, Claire Wilson, is the president of the Federal Way School Board, is pro-choice, identifies as lesbian, and has publicly said she supports a capital gains tax.

Both candidates have several endorsements, but one local endorsement stands out: The Federal Way Mirror endorsed them both.

The way Miloscia sees it, local issues are being overshadowed by a national conversation in this election.

“The issues at the door are issues I campaigned on,” Miloscia said. “Local issues. They care about lowering taxes, homelessness, transit … They’re scared of what Seattle is doing. They want better zoning. They want us to take care of the impoverished without enabling them.”

But, Miloscia said, the conversation tends to focus on candidates’ stances on issues like gun rights, abortion, LGBTQ rights, and climate change. Now, with those issues as what he calls “litmus tests,” it seems Miloscia isn’t sure his brand of politics has a home.

“Republicans liked me being a bridge,” Miloscia said. “I was a voice for social justice, and they allowed me the room.”

Miloscia sees his brand of local politics as a dying breed.

“People are tired of the polarization, but it’s getting worse,” Miloscia said. “The gap is becoming greater. It’s hard for anyone moderate to survive.”

Just a half-mile away, the watch party for the 30th LD’s Democratic candidates crackled with anticipation. I walked in five minutes before results were due. About 100 people were crowded standing-room-only in a coffee shop. Campaign team members’ eyes were on a monitor showing the government elections results page.

As I waited for Wilson to finish a conversation with a child wearing a sticker bearing her name, somebody shushed the crowd. The announcement: Wilson was ahead of Miloscia by 6.6 percent. 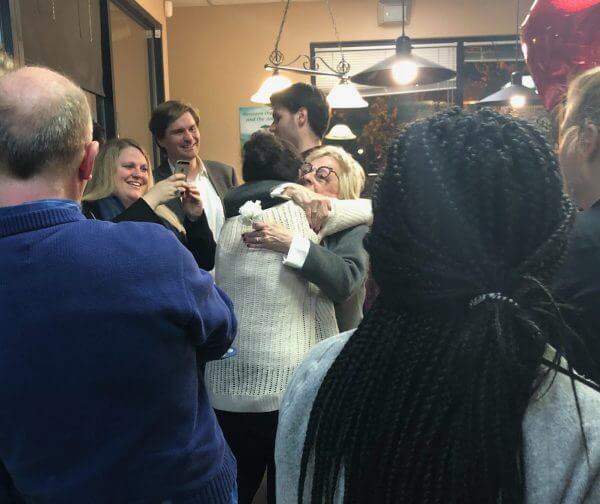 Wilson hugs her campaign manager after early results were announced.

Wilson was immediately absorbed into the crowd, which erupted into cheers. When the hugging and cheering calmed down, Wilson stepped outside with me for a brief talk.

Her goal, though, is in reach. It’s the same goal she went after when she vied for a spot on the School Board. That was about six-and-a-half years ago, when she said she asked her Democratic State Rep what it would take for her to win a spot.

Mark Miloscia replied, “50 percent, plus one.”