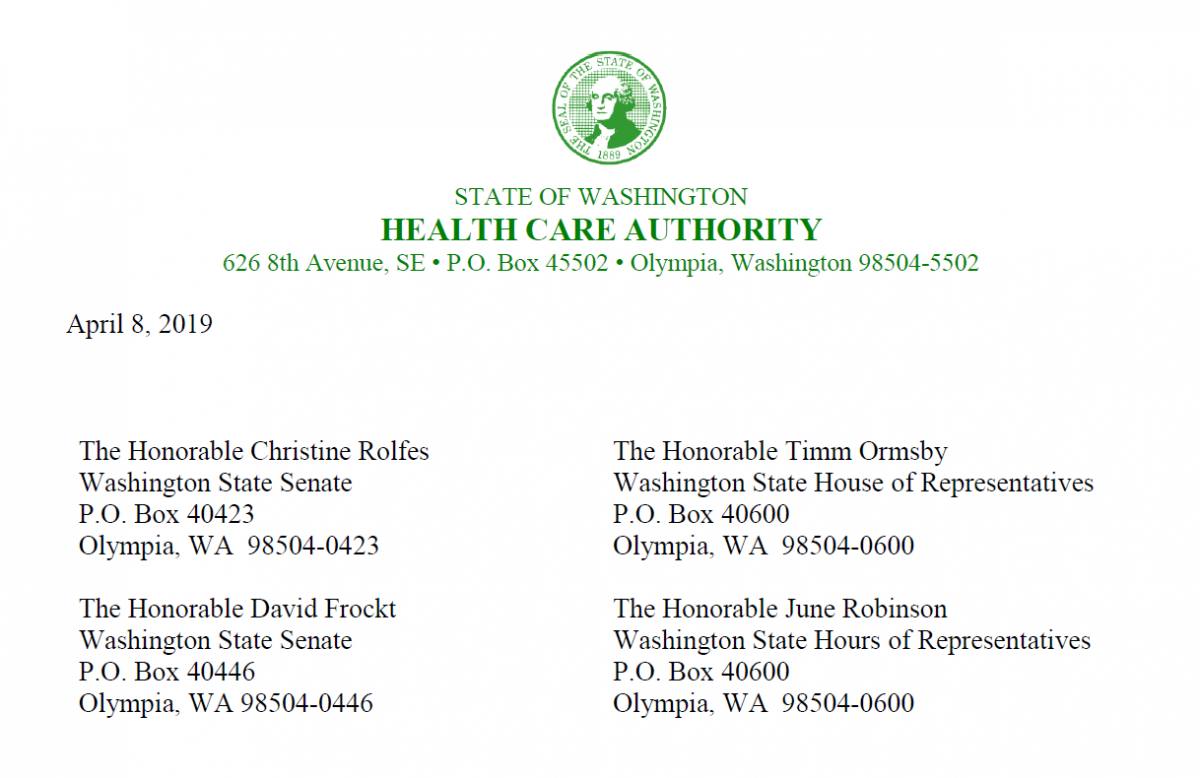 In a series of letters sent to legislators, members of Washington’s health care community have come together to oppose cuts to the state’s Medicaid program in both the House and Senate operating budget proposals.

The letters stem from a cut in excess of $300 million to the Health Care Authority (HCA) that’s included in both the House and Senate proposals. The budgets cut $101.8 million in general funds and $351.5 million in total funds, based on the assumption that Managed Care Organizations (MCOs) will be able to save this money though “program integrity activity recoveries.”

In July 2018, CMS identified areas of concern with MCO oversight, and in a January 2019 report, recommended program integrity activities to save money by combatting provider fraud, waste, and abuse.

An April 8 letter to legislators from Medicaid Director MaryAnne Lindeblad outlines HCA’s concerns with relying on program integrity activities to save the state over $300 million.

“While it is certainly true CMS recently identified areas of concern with managed care program integrity oversight after a focused review of Washington and select MCOs in July 2018, along with similar efforts across the nation, the audit in no way indicated a level of budget savings that could be achieved congruent with the budget,” reads the letter.

“Recovered dollars related to program integrity activities can vary from year to year and are difficult to forecast” as they are based on provider billing behaviors, refunded federal match, and timeliness of the recovery, Lindeblad wrote.

If the $300 million in savings aren’t achieved through these measures, Lindeblad writes that the budget will result in real cuts to the Medicaid program.

“The basis for the savings is that seemingly standard fraud, waste, and audit controls can realize this massive savings. The Health Care Authority, health care providers, managed care organizations, and advocates for Medicaid recipients adamantly disagree that such savings can be made without serious cuts to eligibility, benefits, or both,” reads the letter. “Washington cannot achieve such spectacular Medicaid savings without sacrifice. We urge the Legislature to adopt a responsible budget by including all necessary buy-backs in the Health Care Authority budget and by avoiding the use of any unrealistic savings to balance the budget.”

A letter from the five CEOs of Washington’s Managed Care Organizations (MCOs) points out that all five Medicaid MCOs already allocate resources to program integrity, as part of their contracts with the HCA.

The letter also states that these savings assumptions create a bad perception of the HCA, MCOs, and providers.

“The assumption that there is $350 million in waste, fraud, and abuse in our state’s Medicaid system undermines the confidence in our health care safety net. There is no data to support this assumption. This reflects negatively on the significant fraud, waste, and abuse efforts that we, as MCOs, have achieved to control medical costs in the state’s Medicaid program.”

In addition to the assumed savings based on integrity recoveries, the Senate budget reduces HCA funding, equal to 2 percent of managed care premiums ($49 million), based on savings from the passage of SB 5523. The bill, which passed out of the Senate in March, would require a withhold of 3 percent of the total premium paid to each MCO. The withheld premiums could then be earned back by MCOs, if performance measures reflect improvements.

The HCA takes issue with the assumption that there will be a 2-percent savings through this bill.

“The Senate’s budget assumes the MCOs will achieve a level of improvement that will return no more than one percent of the three percent withhold, resulting in a two percent cut, assuming the MCOs will fail more than they will succeed,” reads their letter.

“Budgeting for failure is counter to all tenants of and incentives for quality improvement.”

Instead, HCA calls for an amendment to reduce the withhold to 2 percent, which it says is the “maximum amount HCA’s actuary has advised we can withhold and still sustain the actuarial soundness of the Medicaid program as required by the CMS.”

The chambers are still in the process of negotiating their final operating budget proposal. The 2019 regular session will end April 28.