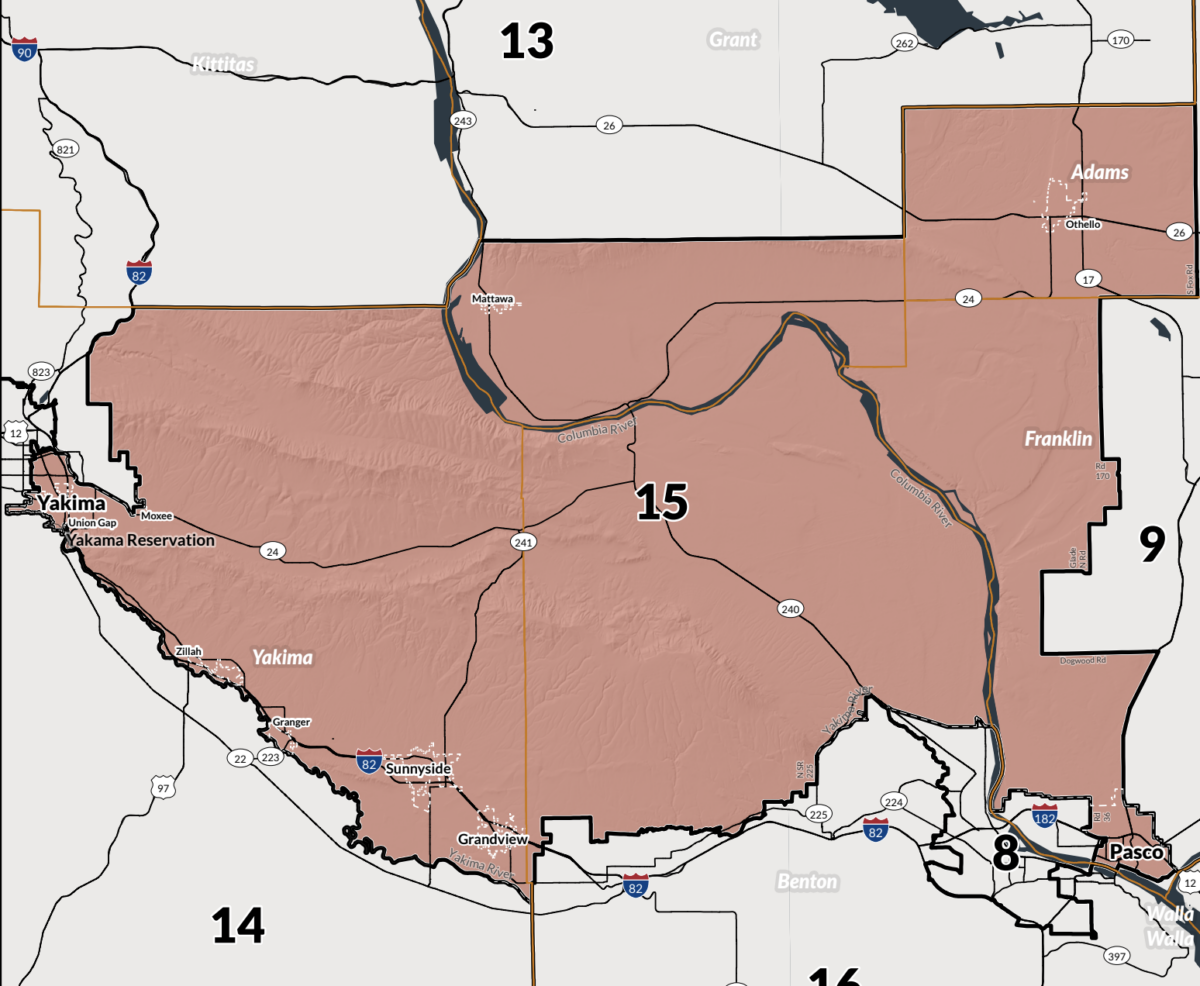 Washington’s new political map has drawn another legal challenge, this time from the right, in a lawsuit that condemns a majority-Latino legislative district in the Yakima Valley as unconstitutional racial gerrymandering.

The complaint filed Tuesday in U.S. District Court was brought by Benancio Garcia of Sunnyside, who is nominally¹ one of the crowd of folks coming after incumbent U.S. Rep. Dan Newhouse from the right in the 4th Congressional District. Garcia’s attorney in this matter, interestingly, is one Drew Stokesbary, whose more public persona is state Rep. Drew Stokesbary,² R-Auburn, familiar to TVW viewers everywhere as the ranking minority member of the House Appropriations Committee.

The lawsuit argues that the new 15th district is unconstitutional because it was drawn purely so that slightly more than half³ of its citizens of voting age are Latino, without any other compelling purpose.

It cites one of the landmark cases of redistricting law, Shaw v. Reno, in which a divided U.S. Supreme Court invalidated an absolutely bonkers-looking majority-black district in North Carolina back in the 1990s on equal-protection grounds.

A separate lawsuit has already challenged the 15th district from the left as a violation of the Voting Rights Act, essentially arguing that it was drawn to be too narrowly Latino to give Democrats a chance to win. For example, it leaves out some heavily Latino areas in Yakima County while including whiter areas of other counties. (A third lawsuit, on the narrower but still important issue of the commission’s naked contempt for the Open Public Meetings Act, wassettled earlier this year with some slap-on-the-wrist penalties.)

The three current members of the Legislature from the 15th are all white Republicans. But the area has had Latino representation. The late Rep. Mary Skinner, R-Yakima, the daughter of migrant farmworkers, represented the 14th District from 1995 to 2009.⁴ Rep. Alex Ybarra, R-Quincy, currently represents the 13th District, which abuts the 15th to the north.

The really fun thing about this little lawyer-off is that both sides are essentially right on the facts (we’ll leave the law to folks in the black robes) because the district was the product of the compromise necessary under Washington’s redistricting system. The two Democrats on the Washington Redistricting Commission wanted a majority-Latino district that a Democrat could win; the two Republicans wanted to maintain their party’s lock on all of Eastern Washington outside of downtown Spokane. Both sides got some of what they wanted.

We already knew that the Democratic leaders in the Legislature who appointed those commissioners didn’t like the new 15th; they’ve refused to defend the lawsuit that came from the left. Garcia’s lawsuit indicates some powerful Republicans somewhere wouldn’t mind a do-over either.

The current 15th is solidly Republican, with a 56 percent structural GOP vote.⁵ The new district is about three percentage points less so, putting it on the edge of tossup territory. At least one of its three seats in the Legislature will have a new occupant next year. Rep. Jeremie Dufault, R-Selah, whose home was drawn out of the new district, announced last month that he wouldn’t seek reelection because it would require moving his young children into a new school district.

This case, like a lot of redistricting arguments, pits broad principles of redistricting — districts are supposed to be compact and contiguous and not divide communities of interest — against the Voting Rights Act, which is supposed to make sure that people of color aren’t shut out of political power by abuse of those principles. Before the Big Supremes⁶ threw it out, the folks in that squiggly line in North Carolina elected the first black member of Congress from that state since the 1800s.

It’s hard to argue that the new 15th is as egregious as the North Carolina 12th, but it does take some liberties with the principles of redistricting. Where the current 15th is just an irregular rectangle entirely within Yakima County, the new district crosses five county lines and stretches southeast to bisect Pasco.

One interesting aspect of this case is whether it prompts Secretary of State Steve Hobbs, a Democrat, to defend the redistricting plan in court. Hobbs pronounced himself neutral on the Voting Rights Act lawsuit, while Senate Majority Leader Andy Billig and House Speaker Laurie Jinkins have asked the court to dismiss them as defendants. Only Hobbs is named in the new lawsuit.⁷

All three seats in the 15th are on the ballot this year. The filing deadline is May 20th.

1 Nominally because he hasn’t raised any money, which means he’s likely going to finish fourth or worse in a field that includes Newhouse and noted grifter and carpetbagger Loren Culp.

2 Stokesbary told me he took the case pro bono and that there’s no big Republican backer who has agreed to cover his fees.

3 The district’s overall population is more heavily Latino, but many of its residents are either not citizens or too young to vote.

4 That was two and three redistricting cycles ago, when the 14th was more centered around the city of Yakima.

5 The commission measured this via the vote for then-State Treasurer Duane Davidson, who lost to Democrat Mike Pellicotti in 2020, figuring treasurer is about as generic a statewide election gets.

6 To distinguish the U.S. Supreme Court from the Washington Supreme court, usually referred to this newsletter as the Supremes.

7 We asked Hobbs’ office this question and got that standard line about not having had time to review the complaint.