Washington has 10th highest rate of cybercrime in US

In anticipation of Cyber Monday, OpenVPN created a report outlining state-by-state risks of cybercrime victimization. The analysis used information from the FBI and the Consumer Sentinel Network (CSN) to determine which states, and which demographics within those states, are most at risk of being affected by cybercrime.

Last year consumers spent $3.39 billion on Cyber Monday alone, and EnigmaSoftware, an anti-malware and spyware company, says that in 2015 malware infections in the United States jumped by over 76 percent on Cyber Monday.

According to OpenVPN’s report, Washington is in the top 10 states in the country for most cybercrimes. In 2016, Washingtonians lost $25,728,634 to internet crime including computer hacking, employment/business opportunity schemes, and non-delivery of goods and services. There were 6,874 internet crime complaints, which translates to an average of $3,742.89 lost per person.

Within the state, Washington males rank 6th worst in the nation for cybercrime victimization, and females rank 4th worst. For all age groups, ranging from less than 20 years old to 59, Washington scored in the top 10 of worst victimization rates, with those in the 60+ age following closely behind in 11th. 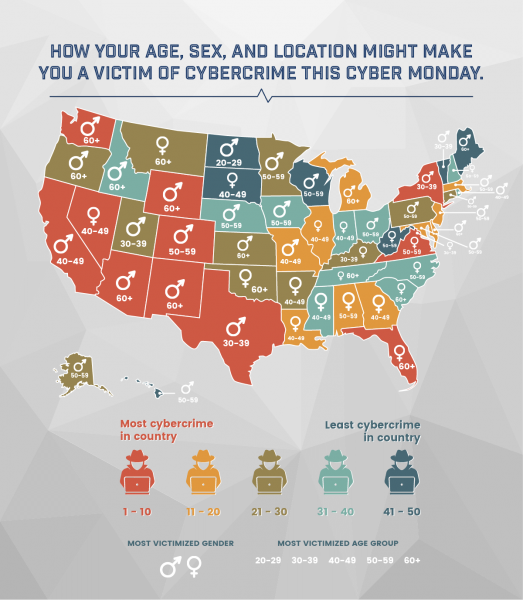 To avoid becoming the victim of cybercrime, Neal O’Farrel, the Executive Director of the Identity Theft Council, recommends always checking links before you click them, avoid using debit cards online, shopping on familiar sites, and making sure all of you security software is updated.

If you would like to learn more — Agnes Kirk, Chief Information Security Officer at the Washington State Office of cybersecurity recently presented to the Senate Financial Institutions & Insurance Committee about Washington’s plan to combat cybercrime.