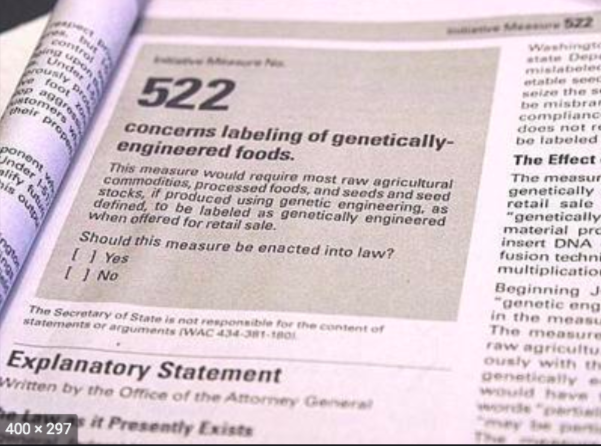 Ferguson’s campaign finance lawsuit against the grocery industry group was filed in October 2013 and accused GMA of collecting over $14 million in contributions for a new “Defense of Brands” account from its members — including PepsiCo, Nestle, Coca-Cola and others — and then contributing $11 million of that money to the “No on 522” campaign.

Initiative 522 would have required certain foods and seeds for sale to consumers that come from plants or animals which contain genetically modified organisms (GMOs) to be labeled as such. The penalty for incorrect labeling could have been up to $1,000 per day per mislabeled item.

In the month after the lawsuit was filed, Initiative 522 was narrowly defeated on the November, 2013 ballot.

Internal GMA documents obtained via the lawsuit revealed concerted efforts to conceal the sources of $11 million in contributions to oppose Initiative 522.

In one obtained correspondence, meeting minutes from the GMA Board’s Finance and Audit Committee meeting show a discussion on the creation of the “Defense of Brands Strategic Account,” in order to circumvent filing standards.

By doing so, state GMO related spending will be identified as having come from GMA, which will provide anonymity and eliminate state filing requirements for contributing members,” read the obtained minutes.

GMA was also found to have rejected an initial draft statement which included a portion where GMA members would say the trade organization uses contributions at their discretion. The reason offered for rejecting the draft was that it “will lead the press and or NGO groups right where we don’t want them to go — meaning, ‘are you assessing you [sic] members, or do you have a ‘secret’ fund of some kind’.”

In September of 2018, the state Court of Appeals upheld all of Hirsch’s ruling except the tripling of GMA’s penalty. Today’s ruling from the state Supreme Court reinstates the $18 million penalty.

My philosophy is straightforward – penalties must be more than a cost of doing business for those, like GMA, who intentionally violate our transparency laws. After an extensive trial, the Superior Court judge ordered GMA to pay an $18 million penalty for their intentional, unlawful conduct – appropriately the largest campaign finance penalty ever assessed. Today, the Supreme Court reinstated the $18 million penalty,” said Ferguson.

In September 2019, GMA announced that it would relaunch itself as the “Consumer Brands Association” effective January 2020.