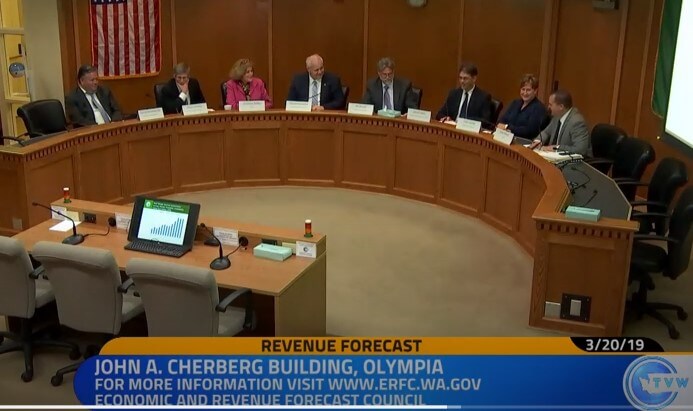 Though Lerch explained that there were not a lot of changes in the economic forecast, he highlighted Washington’s strong, but somewhat unanticipated, revenue growth. General Fund-State (GF-S) revenue collections for last quarter were $245 mil, which is 3.7 percent higher than originally forecasted in November 2018. More specifically, from February 11-March 10 GF-S collections were $91.4 million, 6.8 percent above the November forecast.

The report attributes most of these increases to changes in timing of collections and one-time large payments that were not anticipated in the original forecast. However, even removing those unique collections it is 2.6 percent percent higher than forecasted.

In addition to strong GF-S collections, sales, use, B&O, utility, and tobacco taxes and penalties came in strong at $41.6 million, or 3.4 percent above forecasts. Adjusted for one-time large payments and refunds, collections posted 8.1 percent year-over-year growth, suggesting that we have not yet reached the predicted eventual slow-down — at least not in Washington.

As further relief to consumers and legislators alike, Lerch pointed out that, though it is inching downward, the yield curve, a heralded precursor of recession, is not yet inverted.

Most economic strength indicators appear steady, though not as stellar as some economists had hope. The report points to disappointing job growth in the state, with 4,700 fewer jobs, and slowed growth in retail sales nationally. Of particular concern are a cooling housing market that showed prices falling by 0.1 percent and a 2.7-percent decline in Washington State exports, much of what can be attributed to a steep drop in agricultural exports.

Economic risks to watch include the grounding of the 737 MAX by Boeing and the current and possible continuing lack of a US/China trade agreement.

Legislators greeted the positive news with guarded optimism, potentially tipping their hands as they enter into budget talks in the weeks to come.

In response to media questions at the hearing, Senator Timm Ormsby (D- 3rd LD) indicated that, despite the stronger predictions, additional revenue would likely be needed to fulfill the state’s goals, stating,

“This is good news. We didn’t know what to anticipate given that some sort of downturn is inevitable. So this is good news, but it doesn’t take away from the arithmetic problem we came here with. Which was maintaining our commitment to solutions on problems like K-12 education, mental health and our employees.  This reduces our problem statement, but it doesn’t eliminate it…

In order to make good on our commitment, we would need additional revenue.”

When asked for his reaction to the revised estimates, Senator John Braun (R – 20th LD) agreed with Ormsby’s sentiment, but not with the analysis commenting,

“I agree with Senator Ormsby that this is good news.  In fact this is very good news – better than I expected. We are in the best shape that we’ve been certainly in the last decade…

I’d say that we have $3, possibly $4 billion here that we could spend on new policy without any new taxes at this point. I see no reason, given the growth of our budget and the strength of the maintenance level budget right now, why we would need new taxes to both maintain current services and hopefully make smart investment in the State of Washington.”