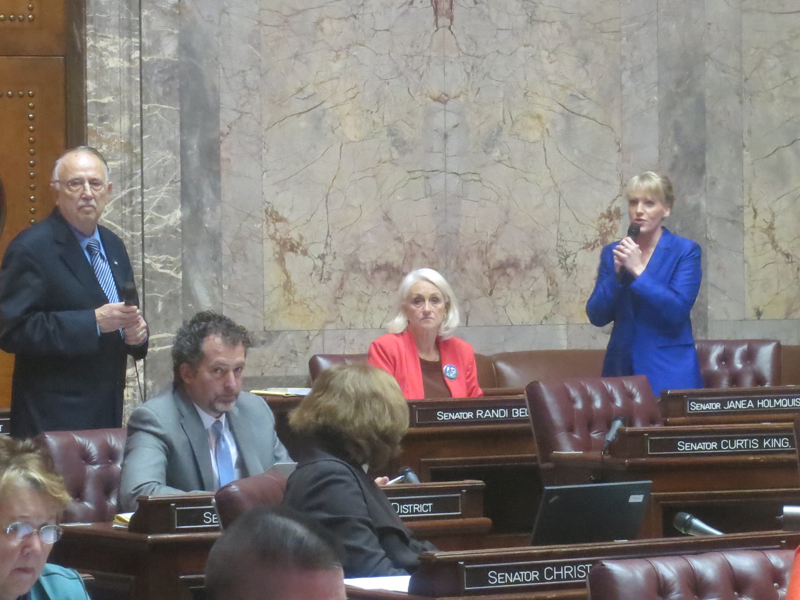 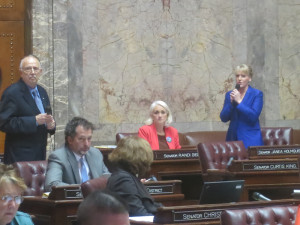 OLYMPIA, Jan. 30.—You couldn’t have seen a sharper difference on business issues Wednesday as Democrats in the state House voted to impose a new paid-sick-leave mandate on business statewide and a largely-Republican Majority Coalition Caucus in the Senate said yes to workers’ comp reforms.

In other words, the House passed a bill that increases costs for business and the Senate passed a bill that aims to cut them. The two bills were part of a blur of activity on business-related legislation Wednesday, so much of it that if it hadn’t already been Dairy Day at the statehouse, lawmakers might have declared it Business-and-Jobs Day. And the two chambers certainly had a different way of celebrating it.

The House Ds and the Senate MCCs are gearing up to pass a slew of business-related bills this session, and there doesn’t seem to be any common ground. The two bills that won passage Wednesday are really just the start. In the House, the progressive wing of the Democratic caucus is gearing up for an effort to increase the state minimum wage, already the highest in the country, from $9.32 an hour to $12 – a cost that would be borne by employers. Meanwhile the Senate heard testimony Wednesday on a bill that would preempt city-by-city union-backed campaigns for higher minimum wages, paid sick leave and other mandates that increase the cost of doing business and create a patchwork of confusing rules that start at the city line.

More bills like them are right behind. Not that they are likely to pass as the House goes one way and the Senate goes the other. You might see it a matter of short-session positioning for the 2014 elections, but the votes definitely provide a contrast. In the spirited debate that preceded the 52-45 vote for the sick-leave bill in the House, Democrats said they were keeping the needs of the workers in mind. Republicans called it a job-killing measure and said a job with no sick leave is better than no job at all. The always-quotable Matt Manweller, R-Ellensburg, got off the best line of the day. Referring to the newly elected socialist member of the Seattle city council, Manweller declared, “I would just say, Mr. Speaker, it is not our job in the Legislature to out-Kshama Kshama Sawant.” 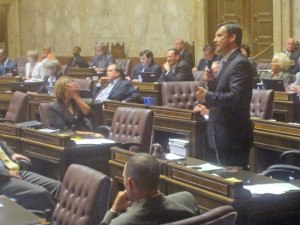 There doesn’t seem to be much reach for the middle ground. All told, just four of the 147 Washington lawmakers crossed party lines on the two big votes of the day. The difference was particularly sharp in the Senate, where the workers’ comp bill was actually a revival of a measure that passed that body last year on a somewhat more bipartisan vote. The workers’ comp bill, SB 5127, would expand a structured-settlement program approved by the Legislature in 2011 that aims to give workers the option of settling their disability claims rather than taking long-term pensions. The hitch has been that the Legislature imposed such stringent restrictions on the program that it has fallen far short of expectations – cost savings for the state program are just 25 percent of what was expected, ultimately meaning higher premiums for employers statewide if nothing changes.

The key political point Wednesday was that the Senate majority ditched a compromise adopted last year that picked up five votes from the Senate Democratic Caucus. Instead, the Senate reverted to its original proposal from last year, a measure that would allow all workers to settle claims, rather than just those over age 55. And as might be expected, Democrats peeled off. Only one member of the Senate Democratic Caucus crossed over and joined in the 27-22 vote for the measure — Sen. Jim Hargrove of Hoquiam, who voted no last year.

Meanwhile, Sen. Steve Hobbs, D-Lake Stevens, architect of last year’s compromise – which allowed settlements for those age 40 and up – looked askance. “While we’re doing structured settlements, eliminating the age requirement, the House is doing these bills to increase the minimum wage and impose paid sick leave. It is like the extreme left and the extreme right are just yelling at each other on policy, and that is just what is happening right now.” 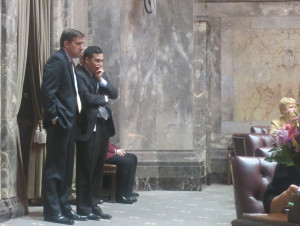 Sens. Steve Hobbs, D-Lake Stevens, and Brian Hatfield, D-Raymond, were among Democrats who voted yes on last year’s workers’ comp bill but no on this year’s, after a compromise measure was ditched.

All is in the eye of the beholder, of course. Politics aside, there is a strong business case to be made for the workers’ comp measure – and one might argue that because settlements are voluntary, it is ultimately a worker decision. But a sharp difference it certainly was. Association of Washington Business lobbyist Kris Tefft couldn’t miss the irony. The two votes in the House and Senate took place at precisely the same time, over the lunch hour. “The House of Representatives for the first time, I think in the history of the state Legislature, actually voted on a bill to require employers to pay employees not to work – that is kind of crossing the Rubicon for our state Legislature. But at the exact same time that was happening, our state Senate was debating and passing a bill to reduce employer costs on one of the most costly items of labor overhead, worker compensation. So it was a very nice contrast for the employer community to see.”

House Republicans and members of the Senate Majority Coalition Caucus underscored the point by calling a news conference Wednesday about their “jobs agenda” – proposals like a teen “training wage” to reduce the state’s high teen unemployment rate. Many are likely to run into the same brick wall in the House. 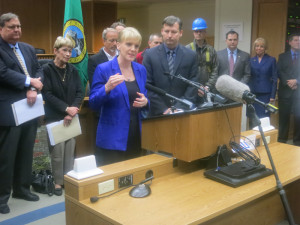 The House sick-leave measure, HB 1313, picks up on the local-level union-backed agitation for paid sick leave and puts it on the statewide stage. The city of Seattle last year imposed a mandatory paid-sick-leave requirement on employers whose workers do business in the city more than 240 hours a year. And last year, in a little-noticed provision of a landmark $15-an-hour minimum wage initiative in the city of SeaTac, airport-related businesses fell subject to the same requirement. The House measure would impose the rule across the state; the bigger the company, the more sick leave they would have to provide.

The measure would have a dramatic effect: About two-thirds of the state’s employers, mostly small businesses, do not currently provide paid sick leave; the mandate require would them to extend the benefit to roughly 1 million Washington workers. Exactly how much it would cost is uncertain: The state has yet to prepare an official estimate, known in legislative parlance as a “small business impact statement.” But a fiscal note prepared for the House Labor and Workforce Development Committee provides a clue. State agencies themselves would fall under the mandate. The state’s colleges and universities, which don’t offer sick leave to students in work-study programs, all said they would face big new costs. The University of Washington, which employs 8,000 students and other temporary workers, estimates that its costs would rise $4 million a year. Smaller state schools reported similar impacts.

On the floor of the House, Democrats argued that the impact would be small and benefits large, and called the sick-leave mandate a matter of compassion for workers who must otherwise come to work sick. Said state Rep. Cyrus Habib, D-Kirkland, said, “I would just ask everyone in this chamber, rather than think of this as part of some larger ideological agenda, just think in your hearts for one moment – would you ever want a job where you can’t even take a day off, to be the parent who is sick or to be with a child who is sick? Would you ever want that for yourself?”

And Republicans retorted that just by debating such things, the state House is sending a chill through anyone who might be thinking of opening a business. State Rep. Ed Orcutt, R-Kalama said he has heard from employers who are holding back on hiring simply because the bill is being discussed. “Not knowing whether or not bills like this are going to pass is forcing them to sit back and wait,” he said. “Uncertainty is one of the biggest reasons why people don’t add employees.” Manweller said that with mandatory sick leave and all the other legislation that seems around the corner in the House, employers in Washington ought to be very, very scared. “This is one more added cost of several that we will consider in the next few weeks, and I think it is important for us to consider a dollar here, a dollar there – it leads to a rhetorical question. What does a $17 Big Mac taste like? It tastes like a $5 Big Mac, but it is just $12 more expensive.” 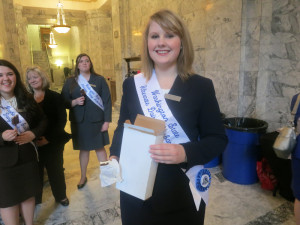 It only seemed like Business-and-Jobs Day at the statehouse. Officially it was Dairy Day. Here alternate dairy ambassador Olivia Zurcher of Mesa performs official duty with a box of free ice-cream bars.

Meanwhile, the impact on workers, good and bad, also was the stuff of argument as the Senate took up the workers’ comp bill. “Our Workers Recovery Act gets at the point by reducing the cost of doing business by providing an additional option and choice to our workers,” said Sen. Janea Holmquist Newbry, the Commerce and Labor chairwoman. Some 44 other states already allow workers to settle claims with no restrictions on age. Advocates said that gives them the chance to move on with their lives after an accident; Democrats, meanwhile, argued that settlements encourage injured workers to blow their cash early, and so the state should keep its foot on the brakes.

But the key point is that an effective settlement program also could help drive down costs for the employers who have to pay taxes to support the state-run workers’ compensation program. It is a big issue at a time with the insurance program is looking to raise rates over the next decade to generate $2 billion to solidify its reserves. The settlement program approved by the Legislature in 2011 so far has turned out to be a dud, largely because political battle at the statehouse and opposition from labor unions forced compromises that imposed a series of restrictions seen nowhere else. At the same time, a bill-interpretation snafu involving the state Board of Industrial Industrial Insurance Appeals, which is supposed to review settlement agreements, has led it to reject settlements en masse when they are forwarded by workers who are represented by attorneys.

Here’s the bottom line. Some 800 settlement agreements have been proposed but just 79 have been approved. By now, the rather limited program approved by the Legislature was supposed to have saved the state $405 million; instead it has saved just $101 million. The disappointing returns can be extrapolated to the future, meaning big hoped-for savings already built into premium projections will not materialize. The bill would direct the appeals board to review attorney negotiated deals. And by launching an all-ages settlement program, advocates argue savings for the program could be much greater. “We need options so that we can do the right thing for the workers of our state and the employers of our state,” said state Sen. John Braun, R-Centralia.

Political philosophy appears to be the issue. Democrat Steve Conway of Tacoma, a staunch labor ally, argued that the reason settlements so far have provided disappointing returns in this state, unlike the experience elsewhere, has nothing to do with Washington’s unusually restrictive rules and the glitches in implementation. “This goes back to the security of the middle class,” he said; workers prefer pensions. “They’re not willing to give that up, and that is why this bill has been dropped down to age 18. It is because the business community has not been able to get the savings from the original bill.”