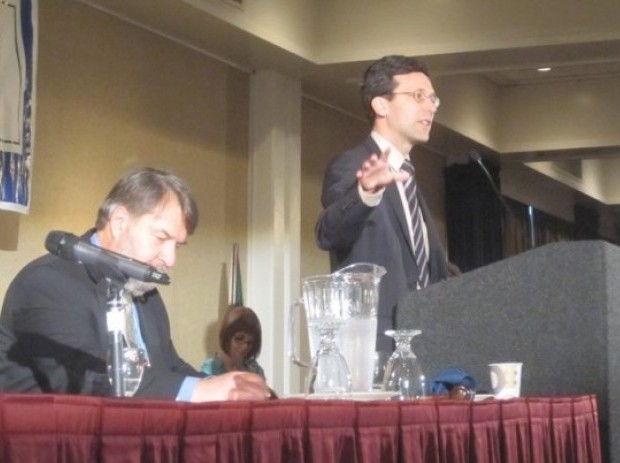 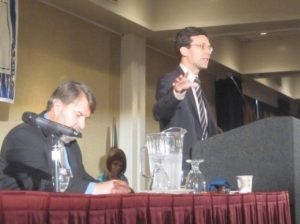 OLYMPIA, March 28.—Nearly 20 years ago, when he was an idealistic law student, Democratic Attorney General candidate Bob Ferguson went to work to defend a notorious cop-killer who had been sentenced to death. Now it looks like that decision is coming back to haunt him in this year’s campaign.

For many in law enforcement the issue is black and white. Within the state troopers’ association, rank-and-file patrolmen are seething about their leadership’s decision to endorse Ferguson. The union picked the Democrat two months ago because its board considered him a stronger advocate for union collective bargaining rights than Republican Reagan Dunn.

But the way the guys on the front line see it, there are some things you just don’t do, and helping cop-killers is one of them. Doug Clevenger was among those who went ballistic. “Here we are, endorsing somebody who had something to do with the defense of a person who had killed not one but two police officers, one being a state trooper, in front of his wife,” says Clevenger, a trooper based in Tacoma. “To me, if you’re going to hold the door for that person, you’re doing too much.”

Meanwhile strong statements from Ferguson against the death penalty in 1993 raise questions about the stand he would take in office.

All of which points to a campaign issue to come, and it means Washington voters can probably count on some mighty biting ads as November approaches. 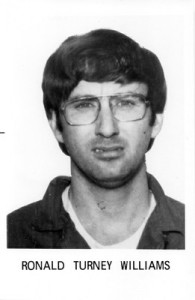 The story really begins with Ronald Turney Williams, a hardened con whom some might describe as a poster child for the death penalty.

Williams’ criminal career seemed to reach a dead end back in 1975, when an officer in Beckley, W.V., Sgt. David Lilly, pulled him over on suspicion that he had robbed a coin store. Williams pumped two bullets into his chest. The cops caught up with Williams in New Jersey and he got a life sentence.

Turned out that was just the beginning. In 1979 Williams masterminded a bloody breakout from West Virginia’s Moundsville Prison in which 15 convicts escaped. On the way out Williams stole a pistol from a prison guard. And when the gang reached the street they stopped a passing car in which an off-duty state trooper, Philip Kesner, was driving with his wife. They pulled Kesner out. Kesner put up a fight. Williams shot him dead.

Although one of the inmates was shot during the escape and died during the getaway in Kesner’s car, for the other 14 what followed was a massive national manhunt that could have put the TV show “Prison Break” to shame. The other escapees were picked up one by one. But Williams, whom law enforcement officials described as a master of disguise, eluded authorities the longest, embarking on a nationwide crime spree involving armed robbery, kidnapping, and yet another murder.

In 1981, he kicked in the front door of a house in Scottsdale, Arizona, and when an elderly neighbor stopped by to investigate, Williams fired and scored a third time.

Williams won the highest honor a fugitive can receive – a ranking on the FBI’s Ten Most Wanted list. And it was the FBI that finally brought him down, in a gunfight in the lobby of a hotel in New York City. Agents shot him four times, but he lived to stand trial in Arizona, where he was sentenced to death in 1984.

That’s where Ferguson comes in.

By all accounts, Williams must have been the client from hell, ordering his court-appointed lawyers to take an advisory role and handling his defense himself. Before his first trial alone he filed 100 motions on his own. Sometimes his lawyers withdrew voluntarily. Sometimes Williams went to court to demand they be removed. By 1993, when his appeals were in their ninth year and Williams was suing his 11th lawyer for malpractice, he asked the court to appoint a new one and Arizona jurists finally balked. Williams had “poisoned the attorney-client relationship,” they said. And he had proven eminently capable of doing the job himself.

Although the law entitles a defendant to an attorney before and during trial, courts aren’t required to appoint an attorney for appeals.

At that point, Ferguson was a 28-year-old law student at New York University, working at a summer job for the Arizona Capital Representation Project, and Williams was incarcerated in West Virginia. Though not officially Williams’ attorney, Ferguson became the lead researcher, communicating with Williams in phone calls and letters. And what is most striking about an interview Ferguson gave to Student Lawyer magazine at the time is that he went well beyond the usual legal rhetoric about the need to provide all clients with representation.

Ferguson spent long hours in the library, researching case law and reading transcripts, looking for anything that might change Williams’s fortunes. Finally came success of sorts. His research didn’t overturn the conviction or set aside the sentence. But the Arizona court, after reading the motion he had written, overturned the previous decision and appointed counsel.

“It felt great,” Ferguson told the magazine, adding that the experience taught him a lesson about priorities in life. “[It] put a whole lot of things in perspective for me,” he said. “In a way, I felt bad that here was this guy on Death Row and all he had was me to help him out. After that, not making law review didn’t seem like such a bad thing.”

Williams never did get his lethal cocktail. Though the Arizona courts upheld his sentence, and former Arizona Gov. Fife Symington called him “one of the most extraordinarily menacing criminals alive,” West Virginia had jurisdiction. That state has no death penalty. Opponents there rallied churches and that state refused extradition. So Williams currently is serving two life sentences for his murders in the Mountain State.

Fast-forward 19 years. These days Ferguson is a member of the King County Council and the all-but-certain standard-bearer for his party in the race to succeed Attorney General Rob McKenna. Suddenly a position that seemed so clear 19 years ago doesn’t seem that way today. Opposition to the death penalty might play well in Seattle, where voting patterns are considerably more liberal than in the rest of Washington, but that leaves five-sixths of the state.

Right now Washington’s Death Row has eight guests on the waiting list, and the state finds itself battling motions from defenders who are playing the same role Ferguson once chose for himself.

So where does Ferguson stand on the death penalty today?

In a statement, Ferguson says, “I’m proud to have the endorsement of the Washington State Patrol Troopers Association, over a dozen prosecutors, victim-rights advocates and over 500 attorneys representing all aspects of the legal profession. Like me, these professionals believe in the rule of law and application of justice in a fair and consistent way.

“As attorney general, I’ll always apply the law without personal prejudice—representing my clients, from elected officials to the people of Washington, with integrity.

“As two-time chair of the King County Law and Justice Committee, I have long been a supporter of the men and women who risk their lives to protect our communities, and should a tragedy occur on my watch where an officer is killed in the line of duty, I will use every legal tool available under law, including capital punishment as appropriate.”

Would Have Preferred Captain Kangaroo

Ferguson’s endorsement by the state troopers’ association has brought a boilover in the ranks, frustrated patrolmen say. Joining the anti-death-penalty bar is bad enough, but sticking up for a cop-killer is like having sympathy for the devil.

Says a letter signed by Clevenger and seven other patrolmen, “It’s one thing to be assigned a case as court-appointed defense attorney, but it’s quite another to voluntarily represent – and express sympathy for – a man who was tried and convicted by three separate juries and is unquestionably guilt of murdering three different people.”

Says a letter from King County trooper Jeff Merrill, “I wouldn’t have cared if the other opponent was Captain Kangaroo.”

The endorsement was a curious process, according to the Seattle website PubliCola – Ferguson and Republican Dunn took turns addressing the board. But the union leaders didn’t have to think long about it. A few minutes after the interviews were done the union board announced for Ferguson.

An internal posting on the union’s members’-only website provides a bit of insight about what happened. The letter, obtained by Washington State Wire, is written by association lobbyist Rick Jensen, and it indicates that Dunn supporters made sure the board knew about the matter in advance. Jensen says that at his urging, Ferguson brought it up during the interview. And his letter says Ferguson offered the board a rather different explanation than he did to the magazine interviewer years before. Ferguson said, “If anyone deserved to die, this guy did,” but added, “that doesn’t mean a convicted death row inmate should be denied counsel.”

It also appears that labor concerns trumped all. “I believe the board made the correct choice for the right reasons,” Jensen continued. “Mr. Ferguson is passionate in what he believes in, which by the way includes his strong and unwavering stance on collective bargaining, with a record to prove it.” He said critics of the endorsement are Dunn supporters and are pushing their own agenda, “not necessarily the prettiest part of election campaigns.”

Apparently that wasn’t enough to satisfy members. As patrolmen’s furor increased and letters of protest circulated widely, the troopers’ association reaffirmed its support for Ferguson with what appears to have been an informal poll of its regional representatives and made a public statement again backing Ferguson on Feb. 3. Washington State Wire contacted the association multiple times for comment but never received a call back.

Meanwhile, Clevenger says of course he’s supporting Dunn – who wouldn’t? He says the dissident troopers are thinking of launching a Facebook campaign of their own. Cops can’t believe it when he tells them what happened, he says. “You have these guys who don’t normally get involved in this stuff, and they say what? They just shake their heads.”