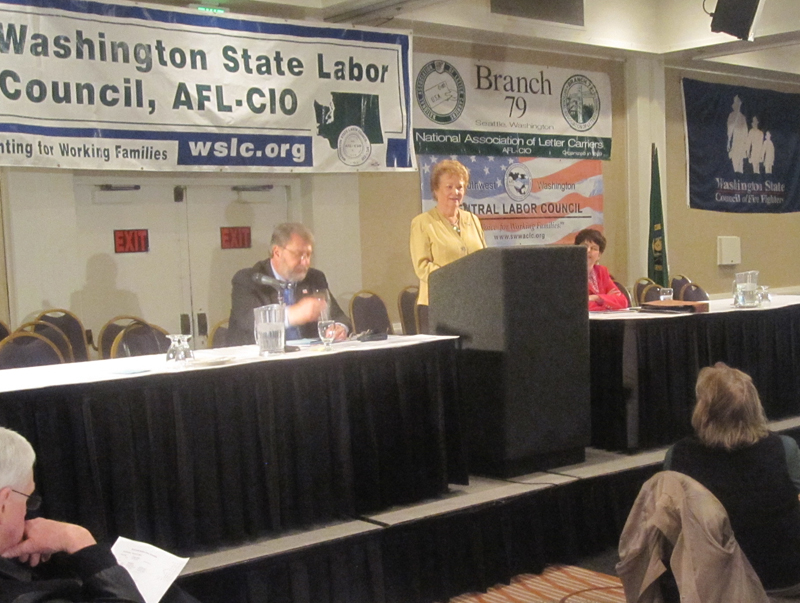 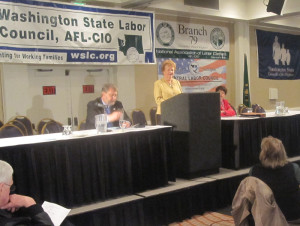 OLYMPIA, March 8.—House Transportation Chair Judy Clibborn says she is undaunted by the spate of discouraging headlines on the transportation front and has every expectation that a proposal for a 10-year, $10 billion tax package will be a front-and-center issue in the final hours of this year’s session.

As Republicans rolled out a plan Thursday they say is aimed at cleaning up problems with the state’s management of road-construction and ferry projects, the central player in this year’s push for a transportation package said she thinks there is plenty of room to make a deal. And anyone who thinks the proposal has run off the tracks has another thing coming when the Legislature enters its “endgame” phase sometime at least six weeks from now.

But she found herself half-jokingly remarking to a Washington State Labor Council conference in Olympia Thursday, “If I get hit by a bus, I don’t know what is going to happen.”

Indeed, the odds are looking a bit long for a transportation package, despite support from business, labor and environmental interests, and its chances appear to depend on the Mercer Island Democrat. She is the last woman standing after an upheaval in the Legislature’s transportation ranks. Longtime Senate transportation chair Mary Margaret Haugen, D-Camano Island was defeated in last fall’s election. There is a new governor, Jay Inslee, who only recently has embraced the effort to pass a transportation package this year, and in the Senate a new Republican-leaning leadership has been cool toward the idea of transportation taxes. Meanwhile, the last week has witnessed the disclosure of a design error on the 520 bridge project that could cost taxpayers as much as $100 million. And a new survey from pollster Stuart Elway indicates some 72 percent of Washington residents oppose a 10-cent-a-gallon increase in gas taxes – a central element in the plan.

It’s going to be a “heavy lift, a hard lift,” Clibborn says, but she remains optimistic. “It is going to be one of those things that is out there on the last day,” she says. “I hope it won’t be 22 hours on the floor this time, but whatever it is, if that’s what it takes, we will have a package that goes out.” 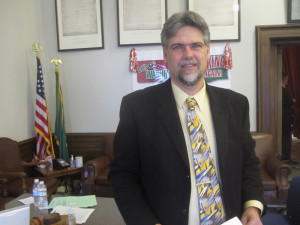 In the House Thursday, Republicans introduced a package of bills they say are aimed at making the state’s transportation programs more cost-effective. “We want to make sure that our projects are done as efficiently and effectively as possible,” says state Rep. Ed Orcutt, R-Kalama, the House Republican transportation lead. “We want to take the least amount out of taxpayers’ pockets as possible.”

Key thing is that Orcutt isn’t saying the measures are the price of a deal – Republicans want them passed regardless. But clearly they represent the GOP position in the debate. Though Republicans are in the minority in the House, they have considerably more power in the Senate, where the 23 Senate Republicans have joined with two Democrats to form a coalition majority. Last week Senate Republican Leader Mark Schoesler, R-Ritzville, said elements of the House reform plan are likely to be embraced by the coalition.

Most controversial likely will be Orcutt’s House Bill 1990, which repeals a “build-it-in-Washington” requirement for new ferry construction that has shunted big new projects to union shipbuilders in Washington — a big priority for labor. Another measure takes aim at the trial lawyers, a second key Democratic constituency, by picking away at the rules that allow attorneys to seek 100 percent of damages from the state even if it is only partially responsible for a tort claim. HB 1984, sponsored by Matt Shea of Spokane, tackles only a small element of what has been a long-running debate in the Legislature, by eliminating joint and several liability for claims against the Department of Transportation. But Republicans say impact could be large: Since 2005, DOT has paid out $116 million for lawsuits.

Other bills take aim at financing. HB 1985, sponsored by Jason Overstreet of Lynden, would exempt future transportation projects from paying state sales taxes – ending a practice which has shunted gas tax money to the state general fund budget and which has inflated project costs roughly 8.5 percent. By the time projects funded by the last gas-tax increase in 2005 are completed, Republicans note, the practice will shift $632 million to the state general fund that might otherwise have been spent on road construction. HB 1989, sponsored by Mark Hargrove of Covington, would limit bonding for transportation projects to 15 years, rather than 30 years, as is the practice today.

Two measures aim to reduce costs to taxpayers. HB 1987, sponsored by O’Ban, would require the use of “design-build” procedures for highway projects costing more than $5 million, through which contractors assume liability for design errors. HB 1988, sponsored by Jay Rodne of North Bend, would require a “right sizing” analysis of “mitigation” costs that drive up the costs of highway projects – a point of particular importance in the current 520 bridge project, where public amenities and environmental enhancements are responsible for a good deal of the $4 billion cost.

A final transportation bill, HB 1986, sponsored by O’Ban, seems ripped from the headlines: It would require a full public report from DOT on design problems and engineering errors costing more than $500,000, along with a plan for corrective action.  Says Orcutt, “I think they have a responsibility to tell us what is going on, to be able to explain to us what happened, to tell us what they’re going to do about it would have done about it and what they’re going to do to prevent it in the future. I think that is absolutely critical because the public doesn’t have a lot of trust in the Legislature, but I think it has even less trust in DOT.”

Clibborn says she thinks some of the reform measures might be good ideas, and if that’s what it takes to make a deal, she’ll be happy to start dickering. “I think there will be some that will definitely worth a look,” she says. “What I’d like to see us do is work together. In the past they have said, if you want to take the reforms, then they will help us with the funding. If they want to start with efficiencies, that is fine.”

But that ferry-construction proposal may be a non-starter. Though a recent audit report from former state auditor Brian Sonntag cited the “build-it-in-Washington” rule as a key factor driving up ferry construction costs, Clibborn drew cheers from the Labor Council audience at Olympia’s Red Lion Inn Thursday when she offered a firm endorsement for the law. Washington has the biggest ferry system in the nation, she said, and the law has fostered a Washington-state shipbuilding industry. “There is nothing that we have to apologize about,” she said. “We will work on making sure that we get the costs down and we get the contracting right. It was not the apprentices [that drove costs up] and it was not build-it-in-Washington. It was the fact that we had change orders.”

Big Selling Job to Do

Clibborn says she continues to hope the Legislature will approve a tax increase on its own, rather than referring it to the voters. But she maintains the Supreme Court’s decision last week junking the two-thirds voting requirement for tax increases actually has made it harder to get a transportation package through the Legislature. Where the requirement in the past has put a brake on the Legislature’s tendency toward tax increases, she said Republicans now see themselves as the last line of defense against tax measures – and that means any proposal faces an even more difficult selling job. Clibborn says she is unfazed by the Elway poll numbers. She admitted she had to gulp a little when she saw them on the front page of the Seattle Times, “but it was not a shock. Nobody wants to raise their taxes. But if you tell them that if you want to pay this gas tax, we are going to make sure that you can get to your jobs, and that your jobs that are linked to trade are ensured… that is what it is all about. And that is why transportation can and should be bipartisan.”