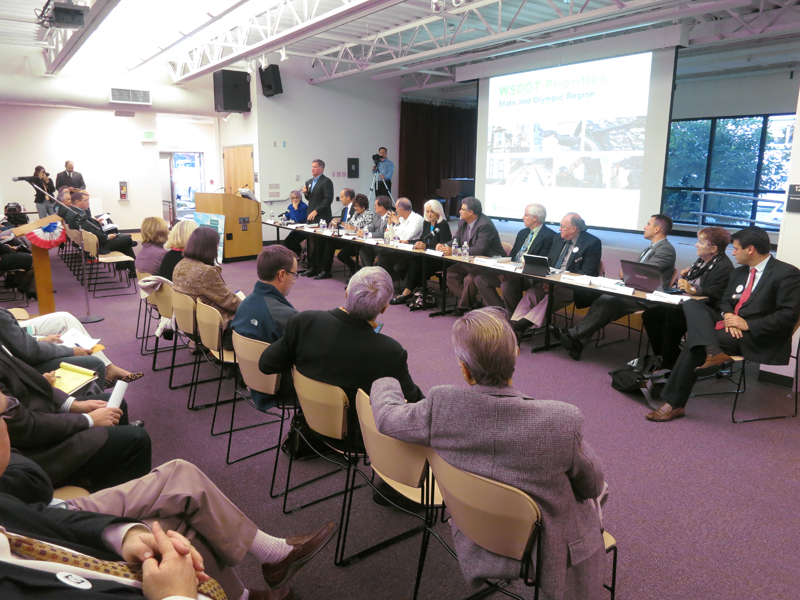 Transpo Tour Nears its End – So What’s Next? 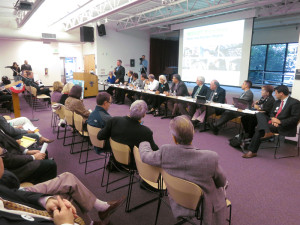 Sen. Bruce Dammeier, R-Puyallup, takes the mike at Tacoma forum as 16 other lawmakers look on.

OLYMPIA, Oct. 14.—The Senate’s month-long road show about roads ends this week, and after one of the most arduous and ambitious series of statewide hearings in recent memory, the big question from the back seat remains. Can’t they hurry up and hold a special session on a gas-tax increase?

Any parent could answer that one. No, they’re not there yet, and they’ll get there when they get there. None of the issues have changed. No game-changing arguments have been introduced during the Senate’s ten-city “listening tour,” now with two stops to go. And despite all the calls for a November special session from labor unions, transportation interests, business groups and seemingly every community in the state with a road project in the queue, it’s looking like transportation is a job for the 2014 Legislature.

Key lawmakers say they are negotiating a series of reform measures that would stand alongside a gas-tax increase and a spending plan for road projects across the state. And certainly they say there is a chance they could reach an agreement before lawmakers return to Olympia for a series of committee meetings Nov. 21. There always is a chance. But it’s a long way from here to there.

Let’s just say that after one of the biggest and grandest schemes to involve the public in a matter of legislative policy, lawmakers are still pretty much where they were when they broke for the summer. And it looks like there’s a full session of dickering to do before lawmakers strike a deal. 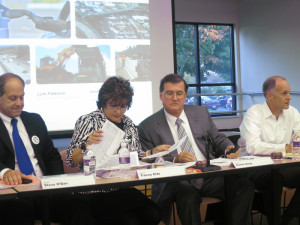 King and Eide spoke with Washington State Wire as they wrapped the eighth of ten hearings in their “listening tour” last week in Tacoma. Two hearings remain this week – Monday in Seattle and Tuesday in Bellingham. Called by the Republican-leaning Senate Majority Coalition Caucus, the hearings have attracted big crowds wherever they have been held, a total of 2,000 people so far. Testimony has been taken from nearly 400 people.

The Senate Majority Coalition took the lead in staging the hearings after it blocked a vote on a 10.5-cent-a-gallon tax hike during the final two days of this year’s legislative session. Gov. Jay Inslee blamed the failure of the measure on “right-wing ideology,” but it wasn’t a partisan failure. Support was only tepid in the Democrat-controlled House, which finally passed the tax increase on the 151st day of the not-particularly-busy 153-day session — without the necessary bond bill. Republican critics pointed out that nothing had been done to allay public concerns about widely publicized management failures at the Department of Transportation – among them an $80 million goof on the Highway 520 bridge project on Lake Washington. And the bill’s fate was sealed when Inslee insisted on including funding for the controversial Columbia River Crossing at Vancouver, strongly opposed by Republican lawmakers from the area because of design issues and because a light-rail extension from Portland would obligate Clark County taxpayers to pick up a portion of the operating costs.

Senate Majority Leader Rodney Tom, D-Medina, announced plans for the statewide hearings before the session concluded, arguing the public ought to be given a say. And for all the partisan fingerpointing that went on under the Dome, the hearings have had a distinctly non-partisan flavor. The idea might have come from the Majority Coalition, but lawmakers from both parties and both chambers have taken seats at the front of the room, anywhere from 12 to 17 at each forum. The state Department of Transportation has lent its support, and Inslee himself put in an appearance at the Tri-City forum Sept. 25.

So far, so good. But what has taken place at the hearings would not surprise a soul. 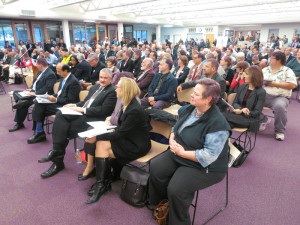 Some 300 people attend Tacoma gathering, second only to Bellevue gathering that drew 400.

What lawmakers basically have witnessed from the front table is a parade of local politicos, local business leaders and labor union members, all of them urging lawmakers to pass the tax. At least you can say the meetings have been fast-paced: Each speaker has been limited to two minutes, allowing as many as 75 people to testify at each three-hour forum. But the testimony hasn’t changed anyone’s understanding. Indeed, it follows a pattern.

Wherever lawmakers go, there is a local project of particular interest that receives a hearty endorsement. In the Tri-Cities, it was the replacement of the Lewis Street railroad overpass in Pasco. In Spokane, completion of the North-South Freeway. In Tacoma, the widening of the Interstate 5 chokepoint at Joint Base Lewis-McChord and the completion of state routes 509 and 167.

Take the testimony of Tacoma Mayor Marilyn Strickland. “If you are serious about creating jobs in Washington state and doing the most transformational project in our lifetimes,” she said, “you will pass a transportation package and you will fund Highway 167.”

Next comes the message that political argument shouldn’t get in the way. Said Joyce McDonald, chairwoman of the Pierce County Council, “I absolutely support the needed reforms that have been outlined, but don’t let perfecting those reforms get in the way of critical investments.” 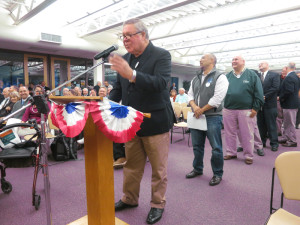 Said former Congressman Norm Dicks, “I urge you all not to get into the kind of mess we’re seeing in Washington, D.C.”

At every meeting, labor officials point out that construction employment has plummeted since the onset of recession in 2008, and argue that an investment in roads and highways will enhance economic growth. “This is so important for us to do for the vitality of our economy,” said Washington State Labor Council President Jeff Johnson. And construction interests say now’s the time to buy. Jerry VanderWood of the Association of General Contractors said 70 percent of the projects bid by the Department of Transportation in the last five months have come in under the engineers estimate because of fierce competition from idle contractors. “The highway contractors are still hungry, there is fierce competition, and I encourage you to take advantage of the buyers’ market and pass a package as soon as possible.”

Was there anything new in Tacoma? The support for the local road projects, yes. “But pretty much everything else we heard tonight we heard in Spokane, we heard in Wenatchee, we heard in Pasco,” Eide said. 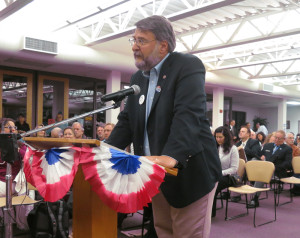 The lawmakers who have been watching from the front of the room say the Tacoma forum wasn’t altogether representative. Of the 75 people who testified in the City of Destiny, only two said anything that might have been taken as opposition to a gas-tax increase, and even that was mild. Only a handful mentioned concern for transportation reforms. The Eastern Washington forums saw a bit more of a balance, and as might be expected, opponents of the Columbia River Crossing turned out in droves in Vancouver. “That one was wild,” Eide said.

The same basic concern remains, King said – no matter what the Legislature does, you can be sure any transportation package will be submitted to a public vote. If the Legislature doesn’t put it on the ballot itself, you can be sure someone will gather signatures to repeal it via referendum or an initiative, as happened the last two times the Legislature passed a gas-tax increase. “You just can’t convince people that we can continue doing what we are doing,” he said. And he said lawmakers have to hammer out a reform package that can stand alongside the tax measure or the transportation package is doomed from the start.

Though lawmakers continue to talk as if a November special session is a possibility, the reform element alone is enough to put a spike through it. The Senate Majority Coalition has a list of 10 proposals, ranging from ending the sales tax on construction materials – which shunts gas-tax money to the general fund – to “opening a dialogue” on prevailing wage and apprenticeship requirements, a point sure to garner opposition from labor. A study by the Joint Transportation Committee of the factors that drive up the costs of transportation projects will not be completed until the end of December, and that means no authoritative analysis will be available until long after the November window of opportunity.

So what has the listening tour accomplished? Certainly lawmakers have learned about local roads that need fixing, King said, and certainly the hearings have involved the public in the debate. “It is interesting to listen to what people have to say and what they feel is important to them,” he said. For lawmakers accustomed to firing off questions during committee hearings, the whole business of sitting and listening in silence for hours might seem a chore. But not for those intimately involved in transportation policy. “If we didn’t want to do this and we didn’t want to pay attention, then it would be grueling,” King said after the Tacoma hearing. “But in all honesty I think I only looked at the clock four times.”