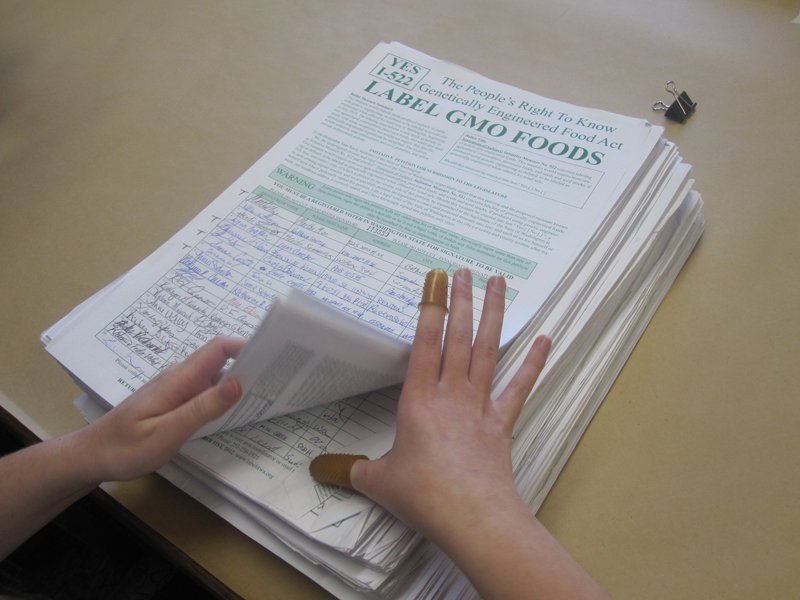 Initiative Season a Big Yawn So Far — No Big Money Against GMO Measure, ‘Initiative on Initiatives’

Two Initiatives Are Only Statewide Excitement on Ballot This Year – Expectations are High for Food-Labeling Campaign, Yet Opposition Raised No Money in June 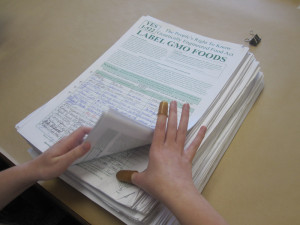 An elections worker counts petitions in January for I-522, the measure that would require labeling of genetically modified food and seed.

OLYMPIA, July 15.—Some of the heaviest hitters in town are lining up against Tim Eyman’s ‘initiative on initiatives,’ a measure that would make it easier to gather signatures and qualify initiatives for the ballot. But it’s not shaping up as much of a show, unless you think an $8,000 campaign budget is a big deal.

Meanwhile, a food-labeling initiative, fresh from the Golden State, holds the potential to become a multi-million-dollar extravaganza. Organic-food merchants and activists are dumping gobs of money into the ballot measure, pretty much what you expect at this point, a little over $2 million. But there’s something strange going on there, too. The industry side is really the one to watch, and last month opponents didn’t raise a nickel.

All of which makes you wonder – just what sort of entertainment is in store for the state’s voters this fall? Normally initiatives spice up a dull off-year election, but this time out the year’s two ballot measures are really the entire show. There are two hot candidate races, for Senate in the 26th Legislative District and for Seattle mayor, but those are being run on a local level, not statewide. Voters who do not live on the Kitsap Peninsula or within the Seattle city limits miss all the fun. Meanwhile, not a single signature-gathering campaign was run this spring. So the two ballot measures – filed last year as initiatives to the Legislature — are really Washington’s only hope for another season of campaign advertising that can be enjoyed by citizens the entire state over, from Ferndale to Asotin, Long Beach to Newport.

Here’s the problem. It takes millions of dollars to flood TV stations with advertising and stuff those mailboxes with daily fliers. By this point in a campaign cycle, the dollars ought to be gushing, and the campaign reports ought to show it. The latest reports were filed July 10, covering the month of June. What has happened so far ought to worry anyone who looks forward to all those educational and informative campaign messages that normally air nonstop during the month of October.

Fund-raising has been anemic on I-517, though maybe that stands to reason. It is the sort of issue that draws big opinions but not big bucks. But the lack of activity last month from opponents of I-522 is more of a surprise. The Washington initiative is seen by many as a repeat of a California fight that last year prompted $54 million in campaign spending. Ultimately business interests won that one. Yet so far Washington hasn’t seen kind of fundraising that might support a similar campaign in this state. One might wonder if industry is having second thoughts about turning Washington into a national battlefield. It also might be a matter of strategy.

Trade Associations Unite Against I-517 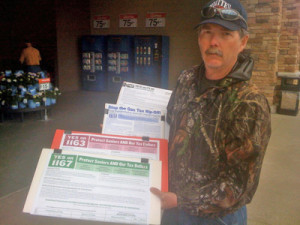 Paid canvasser displays his wares at a Wal-Mart store in 2011.

Some of the state’s biggest business interests are clearly declaring their opposition to Eyman’s initiative-on-initiatives. They just aren’t saying it with money. “It’s not going to be another liquor-privatization initiative,” says Jan Gee of the Washington Food Industry Association. “We’re not going to see anyone raising $23 million.” A coalition of sorts has already been formed to oppose the measure, as evidenced by the opposition statement that has been submitted to the secretary of state’s office for inclusion in the Washington voters’ pamphlet. It carries the names of Gee’s association, together with former attorney general Rob McKenna, former auditor Brian Sonntag and Frank Ordway of the League of Education Voters. Authoring the opposition statement was Andrew Villeneuve of the Northwest Progressive Institute. The Washington Retail Association is listed in Public Disclosure Commission records as an “in-kind” non-cash contributor. Several other players are said to be near declaring opposition, and last week the Association of Washington Business Governmental Affairs Council voted to recommend opposition – a decision that will be taken up by the full body in September.

Why areso many saying no? Most of what the initiative does could hardly be considered controversial. Among other things, it would extend by six months the amount of time during which signatures can be gathered for an  initiative, and it would make it a crime to harass signature gatherers. It would require city and county governments to place initiatives on the ballot when a sufficient number of signatures are presented — they couldn’t keep them off the ballot by declaring them illegal. At the state level that sort of thing is prohibited. The hitch is that the measure would guarantee the right of signature gatherers to collect signatures in all public places – and it says those public places include the walkways leading to store entrances. The idea leaves merchants cold.

Right now, signature gatherers are guaranteed the right to gather signatures at the entrances to shopping malls, because a 1981 state Supreme Court ruling held that shopping malls are the modern equivalent of the town square. But privately owned stores with individual entrances are a different matter. A 1999 decision established that merchants are required to allow signature gathering only if they permit other solicitations on their property – the sale of Girl Scout cookies, for instance. The initiative changes the rule dramatically, by declaring that signature gathering is a “legally protected activity on public sidewalks and walkways and all walkways that carry pedestrian traffic, including those in front of the entrances and exits to any store.”

Many merchants permit signature-gathering already, under the Girl-Scout rule, but they say a requirement that they provide access tromps on their private-property rights. Nothing against initiatives, Gee says – indeed merchants have used the initiative process many times themselves. But retailers want the right to set their own policies. “More and more, because of customer complaints, because of the aggressiveness we have seen since the state moved toward paid signature gatherers, our stores have started to either put restrictions on when and where on the property they can collect signatures, or our stores just don’t do it at all,” Gee said. “[Eyman] is taking away our private property rights, and that is not okay with us.”

There’s another issue involved, a big concern for Olympia insiders. That’s the fact that Eyman, the state’s leading initiative promoter, piggy-backed last year on the campaign he ran last year for Initiative 1185. That was the business-backed measure that reinstated the Legislature’s two-thirds-for-taxes rule, at least until the Supreme Court tossed it out this year. A number of players on the 1185 campaign were dismayed to see signature gatherers carrying petitions at the same time for a measure they considered detrimental to their own interests. Not that one would want to draw a connection, but Eyman is staying out of the election campaign, saying that he wants to focus on a new effort to revive the two-thirds-for-taxes rule. Instead the spokesman role goes to Mark Baerwaldt, who has worked campaigns in the past in favor of the Seattle monorail project and against Sound Transit’s light-rail expansion plans.

What is most important, Baerwaldt says, is that the initiative protects an initiative process that is under constant attack from resentful lawmakers. “The initiative process is an important tool, the most important one the citizens have to push back when government does things they don’t like,” he says. “They don’t have any other remedy. It is a fundamental right under the U.S. Constitution and the state constitution to petition your government. And this just gives some simple common-sense ways to protect it. Initiative policy has been chipped away at for a number of years by court rulings and by attempts by the Legislature to restrict the process. The initiative clarifies some issues that have to do with what I would call bullying. What we’re talking about are some very simple rules that dovetail with existing laws and regulations.”

Where retailers see an intrusion on private property rights, Baerwaldt says he sees a more important issue of free political speech. And however strongly each side feels, it might be noted that neither side appears ready to spend great gobs of cash promoting its view. Where the no campaign has raised $8,000, the yes campaign has raised $305,000 – but all of that was spent on the signature drive last fall. In the absence of a meaningful campaign on either side, the issue might be decided by the wording that appears on the ballot.

Bigger question right now is whether the GMO campaign will become the sort of effort that set California afire last year. Organic-food merchants and food-activist organizations from across the country have been cutting big checks to the yes-on-522 campaign. The measure would require labeling of seed and food products manufactured with genetically modified ingredients, possibly requiring huge investments in new labeling and packaging for Washington state alone. Biggest contributor is an organic soap manufacturer, Dr. Bronner’s Magic Soaps of Escondido, Calif., which has put up $700,000, and the list of contributors shows several more national firms with contributions in the $200,000 range. Out-of-state focus comes as Washington becomes the second major battleground in a nationwide effort to require labeling of products with genetically modified ingredients. The initiative in this state is so similar to the California measure that in many respects it is a repeat of last year’s campaign.

In California, the activists lost 51-49, but it took five-to-one spending by industry and an enormous coalition-building effort to kill the idea. Last year the agribusiness, grocery and biotechnology interests spent $45 million in California. A Washington campaign might be cheaper, but if activists lose here, they will move on another state.  All it takes is one, activists say. Their ultimate goal is to convince Congress to impose labeling requirements nationally.

On the opposition side, the lack of activity is puzzling. Last month nearly a million dollars came from the National Grocery Manufacturers Association and four big biotech firms, Dow, Monsanto, Bayer and DuPont. This month, not a dime in cash, though there was one in-kind contribution worth less than $2,000.

But financing records might show part of the story. They show the same heavy-hitting consulting company that worked against California’s Prop. 37 has been recruited to run the opposition campaign in this state. The firm is Winner & Mandebach – a Santa Monica company that has won big over the last couple of years in Washington State. The same firm ran the successful 2010 campaign to roll back pop taxes, I-1107; the successful liquor privatization initiative of 2011, I-1183; and last year’s successful charter school initiative, I-1240. The three campaigns have one other thing in common, aside from the consulting firm. They were among the costliest ever run in Wasington.

At this point the campaign against I-522. doesn’t look like a re-run of those big-money campaign. The latest campaign finance reports, issued July 10, show that the I-522 campaign had raised $951,000. About half of it, $472,000, has already been spent on campaign consulting fees and prep work.

The amount that remains is hardly enough for a California-scale campaign. But it might be noted that previous campaigns managed by the same firm have been marked by high-level strategies. Big contributions have been timed to prevent disclosures until the possible second. So don’t read too much into the relatively small contributions reported at this point in the campaign, insiders say. And just stay tuned – next month’s report might be more interesting.