As the 2018 Legislative Session quickly approaches, there have been several announcements and pre-filed bills that have caught our eye. Here’s a quick list of some of the issues I will be watching closely over the next few months in Olympia.

During Governor Inslee’s supplemental budget press conference, he briefly mentioned an upcoming “carbon pricing plan” that he will unveil in early January. Though he was vague regarding details, his budget overview said the carbon pricing plan would go toward offsetting the costs of his proposed budget and restoring state reserves.

Inslee has a long history of trying to push a carbon pricing model to reduce emissions in Washington. He has faced an uphill battle as his cap and trade bill has failed to get traction in the Legislature, and most recently, a judge ruled that the Department of Ecology cannot enforce his Clean Air Rule without legislative approval.

With Sen. Manka Dhingra’s win, and a new Democratic majority in the Senate, it may be an easier path for Inslee’s carbon price to make it through the Legislature than in years past. However, Inslee’s previous attempts have failed to pass even in the Democrat-controlled House, so it is unclear if this new majority will make a difference.

Regardless, it will be interesting to see that this carbon pricing plan looks like and what its prospects are moving forward.

Taking steps to combat the opioid crisis is a theme of the 2018 session, with several members in both chambers prefiling bills placing restrictions on opioid prescriptions and strengthening Washington’s Prescription Drug Monitoring Program.

While these bills will be interesting to watch, and certainly reflective of this widespread public health emergency, it is Representative Dave Hayes’s House Bill 2287 that is perhaps most intriguing.

Hayes puts forth an interesting solution for not only addressing the opioid crisis, but also for reducing homelessness and treating behavioral health issues. Hayes’s bill would establish a “criminal justice system diversion center pilot project” that would bring together housing assistance, employment services, homelessness services, behavioral health, and veterans services all in one centralized location. According to the bill, the pilot program would be funded by a grant administered by the Washington Association of Sheriffs and Police Chiefs. The 40-bed facility would be monitored 24/7 and staffed with a variety of professionals to assist with accessing assorted social services.

“This bill is targeted to battle the opioid epidemic, which contributes to additional crime, homelessness and other problems in our local communities. We think Snohomish County is a good venue to test this pilot program, because it has a severe opioid addiction crisis,” said Hayes in a press release.

“Snohomish County plans to use existing facilities with a 40-bed capacity to help those high-need individuals who have frequent contact with law enforcement and are often homeless and impacted by behavioral health and drug-abuse issues,” added Hayes. “It’s our hope that a collaborative effort of local social workers and our law enforcement community can identify at-risk individuals and help them get the comprehensive treatment and services they need through this new program.”

The day before the FCC took its vote on repealing net neutrality rules, Rep. Norma Smith and Rep. Drew Hansen announced bills to keep net neutrality in place in Washington. The two bills aim to protect Washington consumers from the blocking of lawful content by internet service providers, throttling/slowing down lawful content, and favoring certain content over others through special deals.

These announcements, as well as Gov. Inslee’s action plan to keep net neutrality rules in place and Attorney General Ferguson’s intention to file a lawsuit against the FCC, made national news and put Washington on the map as a leader in this bipartisan resistance. As we move through the session, these bills will likely remain hop topics in the media outside of just Washington state.

Transparency is another recurring trend. Whether it’s campaign financing or prescription drug pricing, legislators are looking for more open and transparent access to information.

Rep. Paul Grave’s Legislative Transparency Act would alter the language of the Public Records Act so that state legislators are no longer exempt from public records requests. This topic is currently at the center of a lawsuit filed by the Associated Press against the Legislature.

In September, members of the press sued the Legislature, challenging their claim that they are not legally required to comply with open-records requests. On December 22, a Thurston County Superior Judge heard arguments in the case and commented that he was “somewhat skeptical that legislative offices are not subject to the public records act,” but that he would need more information before issuing a ruling.

Public records requests could include documents like emails, calendars, financial records, or receipts, all of which would add an additional layer of accountability to legislators.  But, another interesting perspective to the passage of Grave’s bill is the impact it could have on potential sexual harassment accusations in the capital in the future. In a tweet, AP correspondent Rachel La Corte wrote, “Access to harassment complaints among reasons why @AP, other news orgs are suing for #waleg documents.” 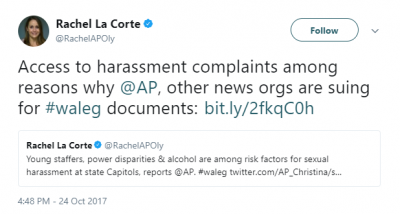 The legislative session will convene next week, on January 8, and is scheduled to run for 60 days.