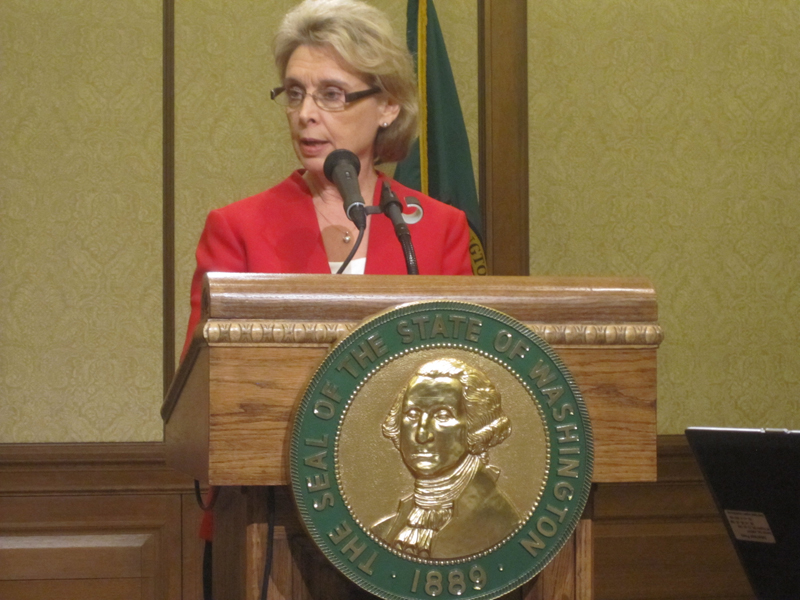 Gov. Christine Gregoire calls lawmakers back into session just past midnight. It might take them a few hours to wrap everything up, she said. In fact, dawn beat them to it.

OLYMPIA, April 11.—Washington lawmakers finally reached the compromise Tuesday evening that had eluded them since November and raced against the sun to end the 2012 Legislature, but dawn beat them to it. The last few bills fell into place during the wee hours of the morning, and when the last few had been run, no one had the energy to bother with the usual ceremony of simultaneous gavel-dropping in the House and Senate.

So the House finished at approximately 7:20 a.m., and Lt. Gov. Brad Owen committed the last act of the session, rapping the gavel in the Senate at 7:28 a.m.

Exhausted lawmakers were in no mood for eloquence by the time the budget bill came up in the House. The following represents the entire debate on final passage, delivered by House Ways and Means Chairman Ross Hunter, D-Medina: “It’s balanced, it doesn’t cut education, we have an agreement, and it’s a quarter to five.”

The 64-34 vote on that measure was one of the final moves in a 40-hour legislative endgame that settled all the loose ends of the 2012 Legislature. Just after 6 a.m., the same bill cleared the Senate 44-2.

Washington lawmakers didn’t make the midnight Tuesday deadline to wrap up their first special session of the year, but they were close enough to the finish line that Gov. Christine Gregoire called them back at midnight for another session and told them to work through the night.

Sleep? Not on your life. “Get it done!” she said. “Get it done and go home. You know, if I let them go home, the air will be out of the balloon again. Right now they are up there. They have got to keep working. They know they are on a deadline. That’s the way we get things done around here.”

Seems like nothing happens and then you get the agreement that solves everything, the governor said. And suddenly nothing can stand between lawmakers and the exit door. That’s what happened here. “This sprint just took a little longer than we wanted.”

Legislative leaders finally reached agreement on the big bills of the session late Tuesday evening, and from that point on, there was no stopping them. Rank-and-file lawmakers, meanwhile, had spent two days milling on the House and Senate floors, and were raring to go. “After a while, it’s like a bunch of sharks trapped in a small aquarium,” said state Rep. Glenn Anderson, R-Fall City.

Suddenly the big bills that had seemed so impossible earlier in the session started pouring out in a flood.

They all moved so fast, and lawmakers were so bleary-eyed, that the details became a blur. All were watered down by compromises worked out at the bargaining table in the governor’s office. But as the night wore on, few had any desire to prolong the proceedings by arguing. Whether there were any goofs, no one could say for sure. They could worry about that once they had a chance to sleep.

This year’s session really started right after Thanksgiving, when lawmakers convened in special session to deal with a shortfall then estimated at $2 billion. By Christmas they had closed a half-billion dollars of the gap by making the easiest of cuts. There were a couple of months of flirtation with a tax increase, before a recovering economy made it possible for lawmakers to avoid sending something to the ballot, where voters might well have said no. The final budget gap was on the order of $1 billion.

But the real debate of the year centered on big reform measures that aimed to keep the same thing from happening again next year. When it looked like the Democrats who controlled the House and Senate were going to take the easy way out, by shunting $330 million in school-district expenses to the next budget, a coalition of Republicans and centrist Democrats rose up in the Senate, beat the Senate Democratic Caucus 25-24, and turned the Legislature upside down. Not only did they demand a budget that balanced this year, but also measures that would keep it balanced in the future.

That was the argument that kept lawmakers in session past their scheduled March 8 adjournment. Some of the reform measures had a direct impact on the budget, others found adherents for other reasons. But it made the negotiations excruciating, the governor said. “It’s hard to do negotiations with criteria like ‘reform before budget,’ ‘budget before revenue,’ ‘revenue before reform.’ When everybody’s got everything coming before something else, how do you negotiate something?”

Public-employee unions fought to the finish on two big reform bills. A measure ending many of the state’s costly early-retirement incentives for new hires cleared the House and Senate before midnight. That one was strongly opposed by the Washington Federation of State Employees and other labor unions, and the final compromise left some incentives in place.

But the union position was far from united on a measure that aimed to create equity in health insurance premiums between teachers and state employees. That one was one of the last to pass. The Washington Education Association called it “a convoluted hodgepodge of new requirements.” The Public School Employees union, which had battled the teachers’ union all session long, called it a “modest step” and a “missed opportunity” for major reform.

Lawmakers ditched the idea of sending a balanced budget amendment to the ballot, but wound up passing a statutory requirement that will require the state to maintain a balanced budget over four years, using budget projections. House Republican budget chief Gary Alexander said it will give the state a chance to see how well it works – the state still might write it into the constitution in a future year.

And as the sun rose over the Capitol, just past 7 a.m., the last major bill passed the state House – a measure that will issue bonds for nearly $1 billion in public works projects, aiming to create 20,000 jobs.

“The sun is coming up and people are going to work now, and after we pass this more people will be going to jobs,” said House Capital Budget Chairman Hans Dunshee, D-Snohomish.

The House Republican lead on the issue, Judy Warnick, R-Moses Lake, got in the last word: “I would agree that people are going to work. We should be on our way to work, rather than going home from work.”