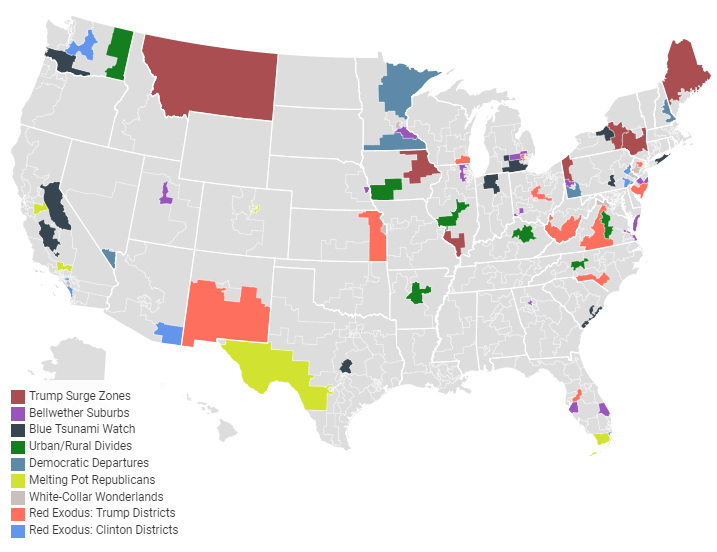 A new analysis from the Cook Political Report breaks down and identifies the various races across the country that will likely decide which party controls the US House of Representatives following the midterm elections. In total, the report identifies 65 seats (60 Republican and 5 Democratic) that are considered “at risk” of switching parties. In order to win control of the House, Democrats would need to win 28 of those seats.

Included in the list are Washington’s 8th, 5th, and 3rd Congressional Districts. All three districts are included in the “at risk” list for different reasons.

Of the 42 open or vacant Republican seats, eight are in districts that went to Hilary Clinton in 2016. Included in that list is the 8th CD, currently held by retiring Rep. Dave Reichert. According to the report, the 8th CD is one of the most problematic for the GOP and it is currently rated by the Cook Political Report as a toss up district. For Democrats to win control of the House, the report says they will likely need to flip 7 of the 8 Clinton-won seats. The other “Clinton Districts” include:

The Republican frontrunner for the 8th CD is Dino Rossi, while a three-way battle between Democrats Jason Rittereiser, Shannon Hader, and Kim Schrier is underway. This will be a primary race to watch.

Also included in the report’s “at risk” seats is Washington’s 5th CD, which the report ranks as “Leaning Republican.” Rep. Cathy McMorris Rodgers has held this seat since 2004, but the race is shaping up to be tighter than in years past as she faces off against former state legislator Lisa Brown. The Cook Political Report categorizes this seat as risky for Republicans, in part, because of its urban/rural divide.

“Democrats have pickup opportunities in seven Trump-won districts that include both mid-sized cities and large rural components. The risk for Republicans in these seats is that energized Democrats in cities like Des Moines, Little Rock and Spokane turn out at sky-high rates while voters in red, rural surrounding areas stay home,” reads the report.

The report predicts that Democrats will need to flip 2 of these seven seats. Here are the other “Urban/Rural Divide” districts:

Lastly, Washington’s 3rd CD, currently held by Rep. Jaime Herrera Beutler, is rated as “Likely Republican” but is part of Cook’s ten “Blue Tsunami Watch” districts. While the report says these seats are a long-shot to switch to Democrats, they are still not secure for Republicans. None of the ten districts are needed to flip in order to switch party power in the House.