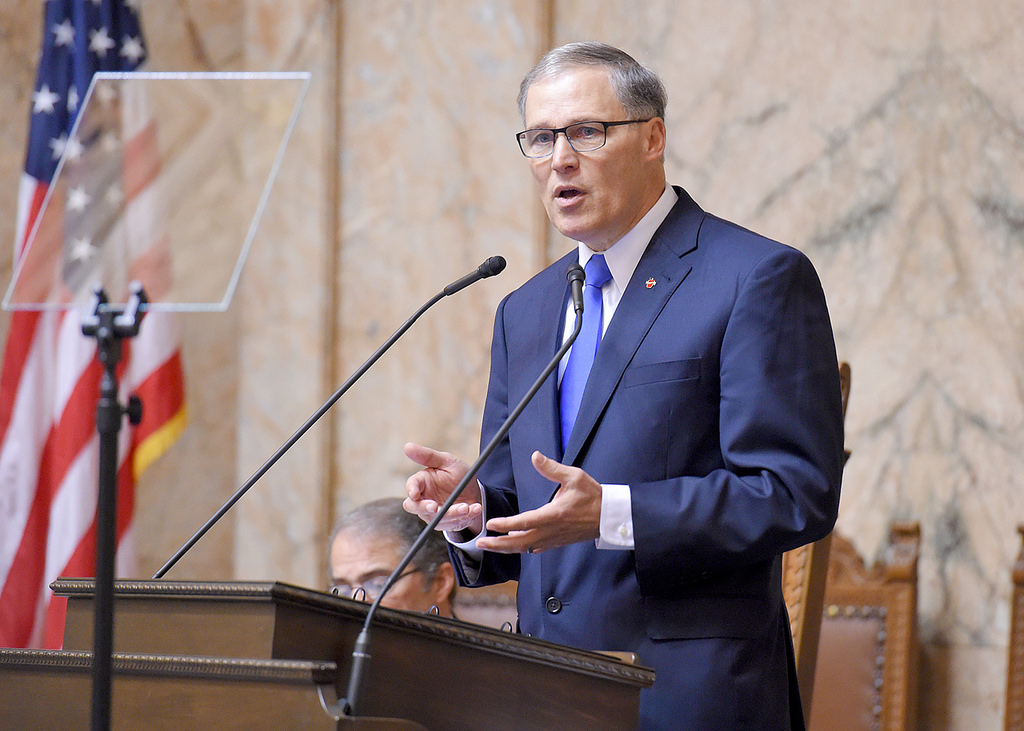 Over the weekend, Governor Inslee spoke at the Iowa Democratic Party’s 2018 Hall of Fame Celebration – a move that when announced, added additional fuel to speculation he is planning a 2020 presidential run.

Inslee was invited to the event in his role as chairman of the Democratic Governors Association (DGA), where he is charged with working to get Democratic governors elected across the United States. While Inslee took time during his speech to voice his support for Iowa’s Democratic gubernatorial candidate Fred Hubbell, Inslee also used his time to highlight his accomplishments, to attack Donald Trump, and to win favor with Iowans.

Here are three takeaways from his speech at the Democratic fundraising event.

An Appeal to Iowa:

The Iowa caucuses are the first major contest of the presidential primary season, and if Inslee is laying down the groundwork for a presidential run, it makes sense for him to work to gain the favor of Iowa Democrats. During the first minute of his speech, Inslee told the crowd,

“Trudy and I have fallen in love with Iowa Democrats tonight.”

Inslee also drew connections between Iowa and the State of Washington, describing the relationship as a “kinship.” He committed to a working partnership with Fred Hubbell on clean energy and encouraged state leaders to continue leading in fighting climate change.

During his speech, Inslee also continued to elevate himself as an adversary to Donald Trump. He told the crowd that he would not be bullied by the president and that he would continue to lead and make progress in Washington despite Trump’s actions.

“His cruelty will be overmatched by our compassion. We should be confident that his chaos will be defeated by our constitution. And when we are resolute, we are going to win this battle ultimately. It is in the basic character of the heart of the American people,” said Inslee.

“America is more of a set of values than it is a geographic place. And that passion cannot be subdued or suppressed easily. Lies cannot dilute it, divisiveness cannot weaken it, Tweets cannot discourage it.”

Outside of his anti-Trump message, Inslee also discussed Washington State’s leadership in minimum wage laws, net neutrality, marijuana regulation, and the economy, while also highlighting recent lawsuits filed against the Trump administration including the Muslim ban and the state’s latest lawsuit on immigration policy.

“I am from the Washington that crushed Donald Trump’s discriminatory Muslim ban in court. And we’re not done. I’m proud to say that the State of Washington, in alliance with Tom Miller in Iowa, are going to bring a suit to stop the inhuman treatment of children in the United States of America.”

Inslee also focused on two of his signature issues: climate change and shifting to a clean energy economy.

Inslee, of course, also took time to support Fred Hubbell in the upcoming gubernatorial election, which his spokespeople say was the primary reason Inslee was invited to speak. Inslee’s remarks certainly fulfilled his duty as chair of the DGA, but his speech did little to quell the rumors of his presidential aspirations.