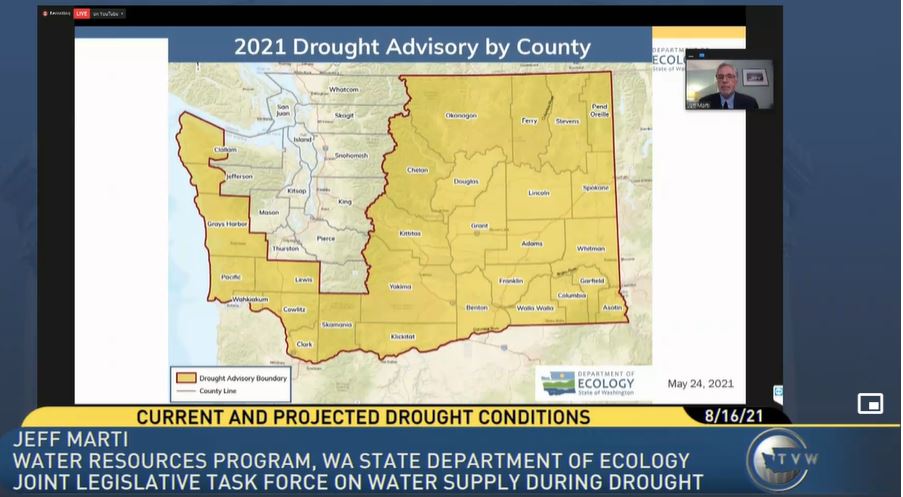 This summer’s drought was unexpected, and unfunded

This year’s severe drought caught elected officials and state environmental agencies off guard which led to not only a shortage of water, but of funding to address its impacts.

Today, the entirety of Washington state is abnormally dry, and three-quarters of the state is experiencing drought, according to the National Oceanic and Atmospheric Administration. It was the second-driest March through July period on record, and the third warmest as temperatures were nearly three degrees above normal, on average.

In other areas of the state, the situation is even worse. More than half the state is under severe drought, nearly 50% is under extreme drought, and 38% is under exceptional drought, which is uncommon in Washington.

To compound the situation, the water and snowpack outlook — which lawmakers and the Washington State Department of Ecology use to forecast drought — was either normal or above average this spring when the Legislature was in session. The Department didn’t ask for additional drought funding during the 2021 session, and the Legislature didn’t provide any.

“At the time we left session in March, it looked like we were going to be very well-cared for as far as our water supply,” said Sen. Judy Warnick (R-13th)during a meeting of the Joint Legislative Committee on water supply during drought on Aug. 16. “We didn’t appropriate money during that session. So we learned a lesson. It caught us off guard.”

But temperatures began rising over the summer, including a severe heat wave in late June and early July, which saw temperatures across the state soar above the 100 degree mark. A second heat wave hit in mid-August.

This year’s drought is relatively friendly to irrigation farmers in places like the Yakima Valley, but dryland farmers are suffering, said Jeff Marti, an environmental planner with the Department of Ecology.

In places like Ritzville, Washington State Climatologist Nick Bond said there’s a roughly 1% chance that the groundwater supplies will be able to recharge by next spring, even with a projected wet and cold winter.

These accounts can be filled by the Legislature, but lack a dedicated funding mechanism. The Department could also raise an additional $400,000 by not filling job vacancies, said Dave Christensen, policy and program manager for the Department of Ecology.

But looking forward, a dedicated funding source could help get drought funds out more effectively.

“Looking forward, we may want to look at these last two years,” Christensen said. “Maybe we need to be thinking about planning and responding to drought differently.”

During the previous two droughts in 2015 and 2019, the state put general fund money or state bonds directly into the account. There’s a few ways lawmakers could create reliable drought funding, said Jim Cahill, senior budget assistant for natural resources with the Office of Financial Management.

Finally, the Legislature could allow the Department of Ecology to charge unbudgeted drought costs to a non-appropriated drought response account.

As climate change continues to pressure local ecosystems, it’s anticipated that droughts and other natural calamities will become more common, more intense, or both. A report on the 2015 drought from the Department of Agriculture estimated that it caused up to $733 million in damages to crops.

Smaller water systems are also stressed by drought, and run the risk of going dry in some parts of the state, said Mike Means with the Department of Health.

Rep. Tom Dent (R-13th) said he was concerned about communities near his district in Moses Lake and others experiencing drought.

“Especially when I look at the chart that showed us the moisture in the ground, the water level in the ground, it’s pretty bleak … If we don’t see some relief from this drought in the next couple of months, we could be seeing an issue in November even.”

The Department of Health could begin conducting a survey of water utilities to measure their water levels.

Water rights will continue to be a problem into the future as well. Carl Schroeder, government relations advocate with the Association of Washington Cities, said there are 56 cities across the state that will need more water to grow within the next two decades. Of these, more than a dozen will need additional water rights within the next five years.