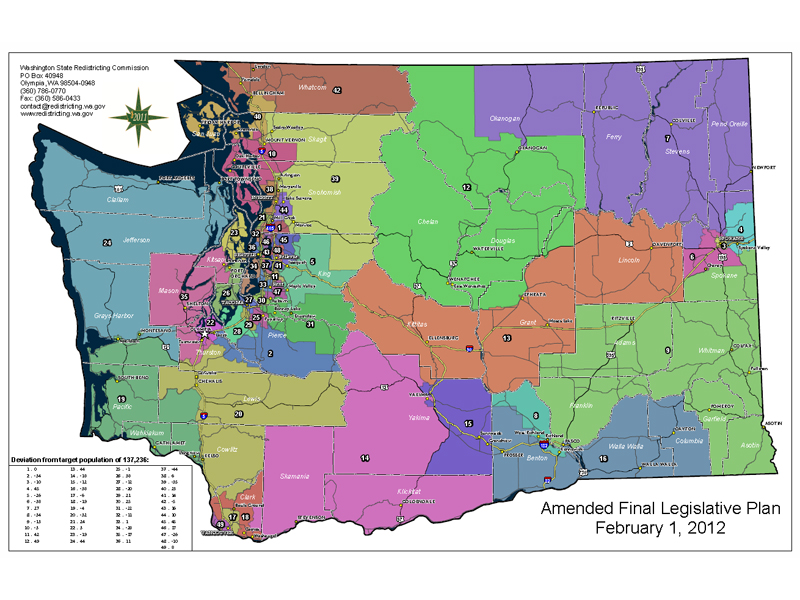 After months of community outreach and drafting maps, Washington’s Redistricting Commission failed to approve congressional and legislative district maps by the end of Nov. 15, meaning the maps will now be drawn and approved by the state Supreme Court.

During a virtual meeting that stretched for five hours on Monday night, and mostly conducted out of view of the public in private discussions, the commissioners rushed to vote on the approval of the two maps. While a majority of commissioners voted to approve both maps and a transmittal letter, they missed the midnight deadline.

Of the roughly five hours commissioners spent in the meeting, which was supposed to be public, about a half hour was visible to the public. Andrew Hong, the statewide director for Redistricting Justice for Washington, said he was concerned about how the meeting was handled.

“My initial thoughts are I think we’re all disappointed with the lack of transparency and the confusing nature of last night’s meeting,” Hong said.

In a Crosscut article, Washington’s Redistricting Commission spokesperson Jamie Nixon said the meeting was not closed, despite commissioners being off-screen for the majority of the time, because they met in “caucus dyads.” The Democratic commissioners, April Sims and Brady Walkinshaw, and their Republican counterparts, Paul Graves and Joe Fain, paired off to hash out differences in the maps.

During the end of the meeting, commissioners also experienced technical difficulties, with multiple commissioners dropping during a vote on whether to approve the transmittal letter. The maps that the commissioners voted on were not available online as of Tuesday afternoon, and requests for comment submitted to Nixon hadn’t been returned.

Just before 11 a.m. on Tuesday, the Commission issued a short statement saying they were unable to adopt a districting plan by the midnight deadline.

“The late release of the 2020 census data combined with technical challenges hampered the Commission’s work considerably,” it states.

While it’s unclear what took so long for commissioners to iron out Monday night, Colin Cole, policy director for More Equitable Democracy, said the results came as little surprise.

“This was always a possibility in my mind,” Cole said. “A big portion of it, I think, circles around the Central Washington scenario, around the need to make a Voting Rights Act-compliant district.”

The Democrat- and Republican-appointed commissioners have disagreed in recent months about creating a majority-minority district in and around Yakima. A Democratic analysis argued that a Latino-majority district should be created due to a majority of Latino voters, while a Republican analysis stated it wasn’t necessary to satisfy the Voting Rights Act.

“At that point, if each commissioner genuinely believed their side… then there can’t be a compromise,” Cole said. “The only way there would be a compromise is if someone were to be persuaded to the other side.”

Now, the Washington’s redistricting process will move to the state Supreme Court, but it’s unclear how the court will handle it. The court has until April 30 to draw up new maps. Lorrie Thompson, senior communications officer for the Administrative Office of the Courts, said the court will be developing the process.

It’s also unclear how or whether community input, which was a required part of the Redistricting Commission process, will be solicited or incorporated. Thompson said:

“They will definitely be looking very carefully at everything in creating that process.”

As of early Tuesday afternoon, Thompson said the court hadn’t received filings from the commission to begin the court’s redistricting process.

Cole said he’s interested in seeing how the court will handle the mapping process, and which considerations they will prioritize. A common criticism of bipartisan redistricting commissions, like Washington’s, he said, is that they can serve as ‘incumbent protection commissions.’

“I’m optimistic that this will result in maps that best reflect communities of interest throughout the state,” he said.

It’s unknown how the Supreme Court will interpret the state Constitution’s requirement that maps not purposely favor or discriminate against a political party or group. What that means in practice in Washington is that while the state is a 57% Democratic performance state, since three of the four commissioners must agree on maps, the legislature remains reliably close to being balanced between the parties.

The court will need to decide whether to maintain this roughly 50-50 power split, or to weigh districts to reflect the voting patterns of Washingtonians. Whatever it decides, lawsuits challenging the maps are likely.

Redistricting Justice for Washington stated in a press release on Tuesday that they’re prepared to “take legal action to ensure that the new maps are in compliance with the federal voting Rights Act. This is particularly important for districts in Yakima, where a recent legal analysis found that the (Act) requires a legislative district that is majority Latino by citizen voting age population.”

Washington isn’t alone in its redistricting woes, as states across the country struggle with the process.

For Alison McCaffree, the Washington redistricting chair for the League of Women Voters, the failure of the commission to approve maps bolsters her view that the process should be rethought.

Washington State is one of only nine states that uses an independent commission to draw redistricting maps. The four members are appointed by the legislature — one from each party from both the House and Senate.

McCaffree said the state could allow the Commission to begin working earlier. Under current state law, the Commission begins work in January during redistricting years. The Legislature could adjust processes, allowing greater transparency, or even create a redistricting or data department that conducts work on an ongoing basis.

Structural changes to the way Washington redistricts would require amending the state Constitution, like adjusting who sits on the Commission. For McCaffree, that could mean a citizen commission, or a tri-partisan commission where there are representatives who are not appointed by the two major parties.

“My hope is definitely that the silver lining of this is that people, our elected officials, will stand up and say people care about redistricting, that this is important to people in Washington State,” she said.