Former state Sen. Paull Shin once told me an axiom he said pretty much applied to lobbyists and legislators alike.

The idea, according to Shin, was that finding fault in legislation is easy. Any legislator or lobbyist can do that. But, putting a bill together that can actually move? That was a unique quality among the Olympia crowd.

Getting something into the budget that can pass both chambers can be even more difficult.

With Monday’s release of the House budget, and as advocates will begin to spend a tremendous amount of energy commenting on the spending plan, I’m reminded of Shin’s adage.

So, here are a few insights into how the budget process actually works.

First, the most important thing to know about the budget process is that it takes 50 votes in the House and 25 votes in the Senate to do anything.

By the time Monday rolls around and the budget is released by a chamber’s caucus (in this case the House Democrats), the document reflects the will of the majority caucus. It reflects work that has gone on, often, since before the session itself is even started.

In other words, it’s a document that has been vetted by the full caucus, and which has been demonstrated in the privacy of caucus chambers to be able to deliver a majority on the floor of the chamber.

Getting that majority requires a significant level of engagement, work, buy-in, and support from caucus members on the relevant budget-writing committee.

As demonstrated by Monday’s media availability, House Democrats sought to show a broad mix of legislative and stakeholder support. Rep. Ormsby was joined by Reps. Hansen, Tarleton, Sullivan and Robinson — all senior leaders of the House Democratic Caucus.

Once a budget gets to the announcement stage, it typically has enough support from the majority caucus — both at the committee level and among the full caucus — that the budget can move forward.

That can be a fragile majority, but it is usually a very strong one.

However, once the budget is released, that becomes the first time advocates and stakeholders can speak to the bill. Stakeholders line up to testify in committee for a public hearing that can last well into the evening, sometimes five or six hours.

But, their advocacy is largely without much immediate consequence.

With a majority built over the course of months, there is little leeway for the caucus to move too much based on the advocacy of stakeholders.

The process is built that way to limit that influence as much as possible, in order to maintain a unified caucus.

Here’s what that looks like from a process perspective.

Monday, the budget was released at about 11:30 a.m. Later on Monday, at 3:00 p.m., the House Appropriations Committee held a public hearing on the proposed budget.

Wednesday at 3:30 p.m., the Appropriations Committee will hold an executive session on the budget.

Often, the committee leadership requests certain parameters around these bills, like keeping them within a certain fiscal scope. While members are free to bring any amendment they’d like, if the chair doesn’t support the amendment, it’s going to be difficult to get a majority behind the change.

So, following a whirlwind set of votes, a handful of relatively modest amendments will get added to the budget on Wednesday.

This is where the 9 percent come into play. This is a group of committee members who are putting the finishing touches on the budget document.

This is the best opportunity advocates will have to get their proposals put into the budget. This is the window to work your magic, stakeholders: 48 hours.

The budget will then move to the House floor. That appears to be scheduled for Thursday this week at 10:00 a.m.

Both caucuses in the House will review the committee’s budget. Some further amendments will be discussed in caucus. It’s likely it will be clear that there is still a majority-level of support for the overall package, at which point the House will be called into session.

A few amendments will be brought to the floor. Some will come forward with the knowledge that they will die, sending a message to constituents that the issue needs more work. Some amendments may come from senior leaders hoping to clarify or change something that wasn’t otherwise in the budget.

But, because most of the senior leaders are on the Appropriations Committee, and because the stakeholder process was so long, there are not going to be too many — if any — senior House Democratic Caucus leaders who haven’t had their issues already included in the budget well before it got to the floor.

In other words, outside of a few possible amendments in committee, the budget that was mostly “baked” on Monday is going to pass off the floor on Thursday. There is very little room for maneuver as the caucus seeks to keep its majority in line.

The Senate will do the same thing as soon as next week. They’ve been working on the same stakeholder engagement since before the session started, too.

They’ll announce a budget, move it to a public hearing, and quickly move it from executive session to the floor in just a matter of days — hours, really.

Once that’s settled, once both chambers have shown that they have the votes for whatever their budget holds, then the budget leaders from both parties, from both chambers, will huddle and try to sort through the gaps between the two positions.

This group is Sen. Shin’s 1 percent. This is the group that will be responsible for determining the trade-offs and compromises, and ultimately whether they can deliver the votes to seal the deal.

The question now becomes “What can get 50 votes in one chamber and 25 in the other?”

So, the two sides will have to negotiate. Here’s where counting matters. If the House wants to include the capital gains tax in a final compromise, the Senate leadership will have to try to find the votes for it.

They will caucus, discuss it with their members, and get some input individually (and sometimes collectively in caucus) from their House colleagues.

But, if the Senate can’t get 25 votes for a capital gains tax, it doesn’t matter how badly the House Democrats want something.

Determining which compromise packages can gather the needed votes from both chambers can take a little while. In a divided legislature, it can take a few months — as we’ve seen in recent years.

In this year’s session, with Democrats in control of both chambers, it will probably take between 10 and 14 days.

This is where the 90 percent of folks that play defense can have power.

If a groundswell of anger takes shape to play defense against an item on one chamber’s wish list, it can shift the balance of politics at the negotiating table.

And, because there is time as this compromise sorts itself out — about two weeks, compared to the 72 hours for a budget to be introduced and move off the chamber floor — a well-organized opposition group can have time to form and mobilize.

The 90 percent, left out of the process so far, can tip the balance at the finish line.

So, there you have it. As Sen. Shin’s axiom suggests, we’re in the early days of a process best measured in hours rather than days, where the few put most of the points on the board, but where a strong finish by the defense can tip the balance of power at the end. 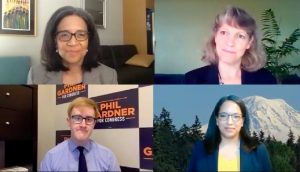