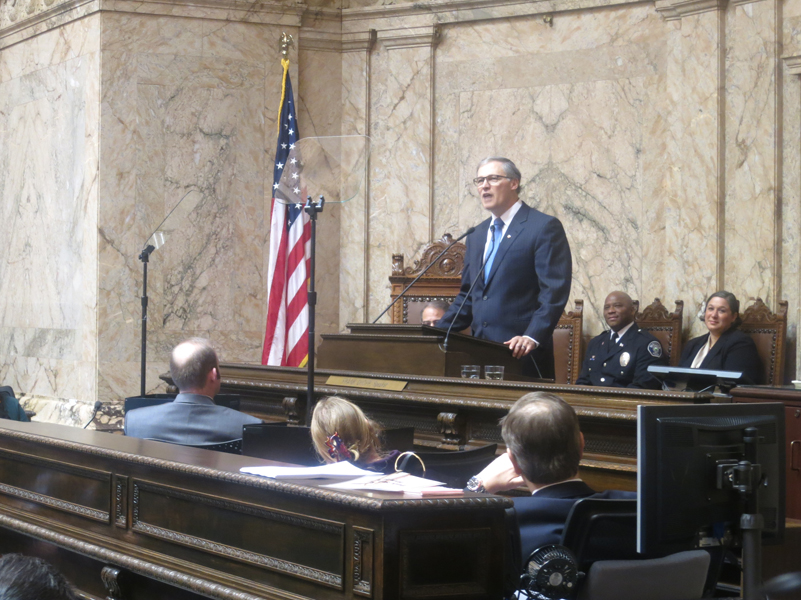 Tax Talk Back On Table, Governor Declares – Blames it on Supreme Court 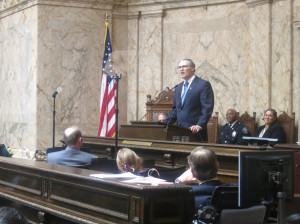 Gov. Jay Inslee appears before a joint session of the House and Senate Tuesday as he delivers his State of the State address.

OLYMPIA, Jan. 15.—Forget what he said last month – taxes are now a central issue for this year’s legislative session, declared Gov. Jay Inslee in his State of the State address. The Supreme Court made him do it.

In his annual keynote speech to the Legislature, the Democratic governor essentially tore up the hold-steady budget proposal he offered last month and said he would come up with a new one, offering cost-of-living pay increases for teachers and somewhere on the order of $200 million in additional education spending. But more important, he said he expects the Legislature to follow the directive laid down by an activist Supreme Court last week and come up with a plan to pump $5 billion into the state’s schools by the 2017-18 school year.

Inslee also said he would seek a big increase in the state’s minimum wage, already the highest in the country, somewhere on the order of $1.50 to $2.50 an hour. Contrary to the preview of his speech he offered reporters last week, the governor had little to say on the subject of climate-change legislation, though he said he expects to make some sort of proposal within the next few weeks. And while Inslee continued to urge support for a gas-tax increase for road construction, he disappointed Republicans and transportation advocates who had been hoping he would make some sort of a promise Tuesday that he will not issue an executive order requiring the state to adopt low-carbon fuel standards. Inslee so far has refused to rule out the idea; new regulations could drive up the cost of fuel by a dollar a gallon.

In the 34-minute speech, Inslee said the Legislature cannot ignore the order the state Supreme Court issued Thursday, to come up with a funding plan for the state’s K-12 schools by April 30. The court maintains that lawmakers haven’t made enough progress in implementing its McCleary decision of 2012, which held that the state isn’t providing enough money for basic education. “We need to stop downplaying the significance of this court action,” Inslee said.

And so begins a debate on taxes that lawmakers had been hoping to defer until next year, after the elections. So what else is new? Republican lawmakers said afterward. Of course taxes are the governor’s central priority, said Senate Republican Leader Mark Schoesler, R-Ritzville. “They always have been with Jay. Since day one that has been the go-to issue.” 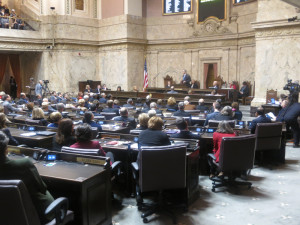 Senators and representatives crowd the House floor for joint session.

The speech, delivered on the second day of the Legislature’s 60-day session, is the traditional outline of the governor’s priorities – a message lawmakers can ignore if they wish, but which does much to shape the Legislature’s debate. In declaring his support for the Supreme Court’s position, the governor avoided stating the obvious point – that the court’s $5 billion demand will require lawmakers to come up with a plan to raise significant amounts of money, and fast. In other words, taxes.

Instead Inslee approached the matter delicately, using everything but the deadly T-word itself. “The court wrote last week that it doesn’t want to give specific funding directives or hold the Legislature in contempt,” he said. “The court was clear when it said ‘this case remains fully subject to judicial enforcement.’ We must not let that happen, and by working together we can live up to our responsibility and create a better Washington for generations to come.

“And we’re going to have to do that in a way that doesn’t rely on gimmicks, one-time fixes, cuts to services that protect our state’s most vulnerable children and families or cuts to higher education. For too long, the easy answer in Olympia was to cut those services. I was proud we stopped that last year, and we should not let that happen now.”

Inslee stopped short of describing which taxes he will advocate in order to raise the $5 billion. But he did say he will come up with a new proposal this session to whack business tax breaks, as he did last year. Such proposals enjoy general support in Democratic ranks but enthusiasm has always faltered when they have gotten down to specifics, even among Democrats themselves. A war on loopholes is unlikely to come anywhere close to the amount that is required: Last year’s failed proposal amounted to about a half-billion dollars, a small fraction of the amount required.

“You can expect that again I will bring forward tax exemptions that I think fall short when weighed against the needs of our schools,” he said. “And in some areas we need to do more than the court has mandated, such as early childhood education. Our children are our paramount duty at every age, from kindergarten to 12th grade.” 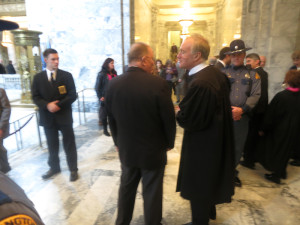 Justice James Johnson, the lone dissenting vote on the Supreme Court order, drew wild cheers on the House floor when he was introduced. Here he speaks with Senate Judiciary Chairman Mike Padden, R-Spokane, on the way out of the chamber.

It was Inslee’s first State of the State address since he assumed the state’s highest office last year, though he did deliver another address to a joint session of the House and Senate on the occasion of his inauguration. Observers noted that the governor offered few of the usual obvious applause lines – a decision that kept the running time shorter than most such speeches, but which eliminated one element of the traditional spectacle. There were few opportunities for members of his own party to cheer, and few opportunities for members of the opposition party to demonstrate displeasure by sitting in stony-faced silence.

When Owen called Johnson’s name, the Republican side of the aisle erupted in whoops and cheers that took considerable time to die down.

Democrats weren’t going to let that one pass. A few more names were called, and then Owen got to Steven Gonzalez, the newest member of the court, who in recent decisions has demonstrated himself to be a steadfast liberal vote. Democrats gave him a loud cheer as well, and while no one was running an applause-meter, from the front of the chamber it seemed that Johnson got the better of it by a slight margin.

In his address, Inslee said he will push for a dramatic increase in the minimum wage – an idea that has broad support in progressive ranks. Washington already has the highest state minimum wage in the country, $9.32 an hour, but activists have been calling for a much bigger increase, to $15 an hour. Last year the city of SeaTac became the first municipality to impose a minimum wage of that level, via a voter initiative, and the possibility is now being eyed in the city of Seattle. Inslee said he wanted to see an increase of $1.50 to $2.50 an hour, on top of the annual increases that are forced by a voter initiative passed in 1998 and which have placed Washington ahead of all other states.

“There is ample evidence that a raise in that range does not kill jobs. An increase in the minimum wage means more money being spent in our economy. As I look out at this chamber today, I recognize the political realities of the split control in our state Legislature. But we must spend time and energy – and yes, political capital – helping make sure everyone in Washington is paid a fair wage.”

An increase in the state minimum wage would not cost the state a dime in a direct fashion, as employers would bear the burden. Inslee also said he would urge an increase in threshold for the business and occupations tax, exempting businesses that generate less than $50,000 in gross receipts annually. The increase represents a modest increase in the threshold, which currently is either $28,000 or $46,500, depending on the class of business.

The biggest specific change in position evident in Inslee’s speech came with regard to cost-of-living increases for teachers, who have not been granted a COLA since the boom year of 2008 but have remained eligible for experience-based salary increases. Inslee announced last month that 2014 wasn’t their year, and general pay raises ought to be part of a broader debate about education funding in 2015. But in his speech Tuesday, Inslee embraced a union-backed campaign to grant teachers a 1.3 percent cost-of-living increase. The state Office of Financial Management estimated last month that the COLA would cost $57 million the first year, though the long term cost would be higher because the increase would be baked into teacher salaries for perpetuity.

Inslee noted that Washington voters embraced teacher cost-of-living increases when they enacted the seldom-honored Initiative 732 in 2000. “Let us not forget that Washington voters spoke loudly in 2000, saying that educators should get this COLA every year. Yet repeatedly that mandate has been shunted aside. We’re going to live up to that promise this year.”

No Word on Climate 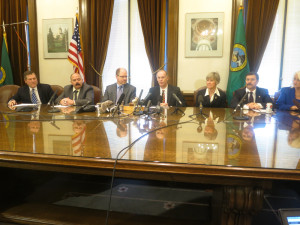 Leaders of the House Republican Caucus and the Senate Majority Coalition Caucus — the loyal opposition — hold a news conference following the governor’s address.

Inslee continued to urge support for a transportation tax increase, saying he hopes the Senate will pass a gas-tax increase this year as the House did in 2013. “If this happens, I am confident we can find agreement before this session ends.”

But perhaps the biggest surprise in Inslee’s speech was the absence of proposals on climate change. Last week he told reporters at an Associated Press legislative preview forum that he planned to make a few bold policy proposals to reduce the state’s carbon footprint. There were no proposals to be heard. Instead he noted that a climate-change task force will issue a final report next week, and after that he will offer “our best thoughts on next steps.” He promised, however, that he will do something. “Going backward is not an option. Inaction is not an option.”

Inslee communications director David Postman said the Supreme Court order wasn’t the reason for the governor’s change in direction. Climate is “a work in progress and more time is needed before announcing next steps,” he said.

Inslee closed by stating he is in favor of a Seahawks victory in the NFL playoffs this weekend. “Thank you. Go Hawks.”

After the speech was over, members of the House Republican Caucus and the bipartisan-but-largely-Republican Senate Majority Coalition Caucus said they were unimpressed. At a news conference, they said they are interested to see what sort of tax proposals the governor will put forward. They said the current plan is to cooperate with the Supreme Court dictum and produce a plan by April 30, though the odds are it will look rather different than anything the governor has in mind. Reforms to the K-12 system to limit non-education expenses may well reduce or eliminate the need for big tax increases, they said. “You can more than fund that without new revenue, and that is going to be the direction of the Senate,” said Majority Leader Rodney Tom, D-Medina. “We are going to continue to press forward with a great education system.”