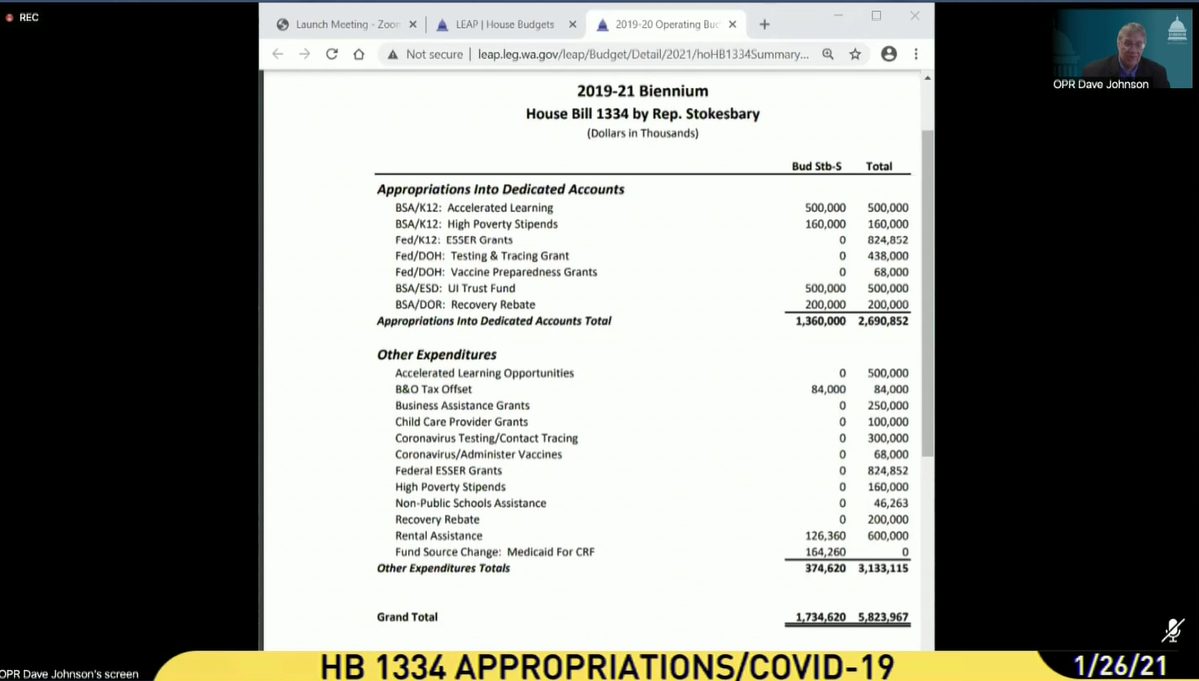 The work session followed a public hearing for the competing Democratic economic relief package. Stokesbary made the case for why the Legislature should adopt his proposal instead.

Comparing the two packages, Stokesbary acknowledged that there is significant overlap in the priorities each would fund. Drawing down funds from the Budget Stabilization Account (BSA) to provide more overall funding, and a higher price tag, is what separates his proposal from the Democratic alternative.

I think the big difference is that my proposal involves using a significant portion of our current rainy day fund balance. That was not a position I took lightly,” said Stokesbary. “This is now my seventh year in the Legislature and save for one or two narrow exceptions, I have always opposed the use of the rainy day fund. I’ve always felt like not only do I have a fiduciary-like responsibility to our state’s taxpayers to steward their dollars wisely, but especially when it comes to the state savings account, which is money we can only spend once, I think we have a heighted duty of care there. However, as we heard from testimony and our constituents throughout the interim, the need is high and the need is now in the communities we represent. It is hard to imagine a day that could be rainier than the one we have right now. So if now is not the time to use the rainy day fund, when is?”

Democrats also say their proposal is only “step one” of a broader relief effort. The narrower bill, which would make payments largely through existing programs, will allow them to get money out the door quicker, they say.

But Stokesbary says his proposal’s larger price tag is justified. According to him, the Democratic proposal does not appropriate enough funds for certain priorities, such as rental assistance, assuming the pandemic and its downstream economic impacts persist for several more months.

From the BSA, he would direct $660 million into a newly created dedicated account around K-12 education. The first $500 million would fund “accelerated learning,” an education format that allows students to complete courses in a shorter period of time compared to a traditional semester. The next $160 million would be used for high poverty stipends to families of students who qualify for free and reduced price lunches, which costs $300 per student

Stokesbary pointed out that $400 million in his bill appropriated to address learning loss was an idea initially proposed by Gov. Inslee.

The Democratic package appropriates $668 million for schools to follow public health guidelines as they resume in-person learning plus dedicated funding for learning loss.

The bill also directs another $500 million from the BSA into the unemployment insurance trust, which has been strained by an unprecedented number of claims and the payment of $650 million in fraudulent claims. Stokesbary says this a critical component to addressing the added burden on employers, as the trust is completely employer-funded.

Businesses no matter what are going to have to pay significantly higher unemployment rates for the next several years to restore the unemployment trust fund’s balance. There’s a bill that’s floating around which would I hope will head our way soon that will address some of that issue on the rate side. But there’s really two perspectives that you need to consider,” said Stokesbary. “There’s the rates that business pay but there’s also the balance in the fund.”

The bill to which Stokesbary referred is SB 5061, legislation sponsored by Sen. Karen Keiser (D – Des Moines) which would prevent a drastic increase in unemployment tax rates for businesses. Stokesbary says the state should cover some of the costs for refilling the unemployment trust.

A bipartisan Work families Tax Credit proposal Stokesbary is sponsoring with Rep. My-Linh Thai (D-Bellevue) is scheduled to be heard in the House Finance Committee next week.

In total, the bill would appropriate $1.7 billion from the BSA, leaving the account with a projected balance of about $240 million.

Drawing another distinction between the relief packages, Stokesbary also mentioned that his bill includes an added tax reduction for members of the hospitality association.