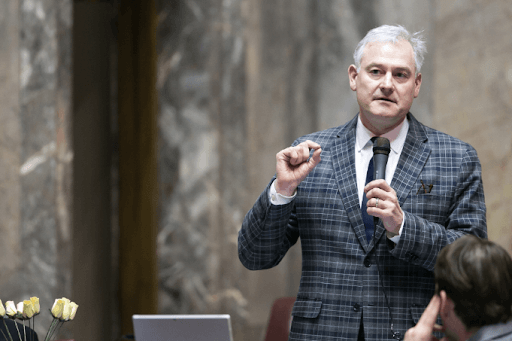 A month ago, we spoke with Sen. Reuven Carlyle, chair of the Senate Environment, Energy and Technology Committee about his climate legislation goals for the 2022 session. A few days later, he was on his way to the UN Glasgow Climate Change Conference, known as COP26, to speak about Washington’s efforts to reduce emissions and address climate change. We circled back with Carlyle to get the inside scoop on the summit.

Aaron Kunkler: How did the COP26 summit go?

Sen. Reuven Carlyle: I have to tell you, the panels that I did, I was so honored and it was such a pleasure to tell the Washington State’s story when you step back and just look objectively at what we have adopted in this journey that we are on. We’re big enough as a state to be impactful, but small enough to actually get it done. So the fact that we are roughly the size of Norway and Sweden and Denmark and Israel and you know, countries around the world, and then when you recognize the strength of our partnership with the Pacific Coast Collaborative, British Columbia, Washington, Oregon and California, it was just incredibly impactful and exciting to meet with leaders from throughout those areas.

I met with senators from California for multiple events, and we talked about linking our legislation… A big theme of the conference was decarbonized maritime and aviation, a ton about energy storage, long haul trucking. It just was sort of graduate school for climate action. Wrapped in it was just all about learning and race and humility and relationships and ideas and politics and policy. But people were so in tune with the magnitude of what Washington has accomplished, it was really meaningful on a personal and professional level. And when you look at we’ve passed, hydrofluorocarbons, building efficiency, cap-and-invest, a clean fuel standard, electrification of transportation, multi-year rate case making for our utilities, modernization of the grid and so much more. People were really, really pretty excited, invigorated that a state has made this kind of progress.

RC: Oh, yeah, we left it all on the field. The governor was great and announced some cool things, and Durkin was there. There were a number of business leaders in Washington State. So it was a really meaningful experience.

AK: That’s great to hear. What were some of the big takeaways or action items you took from the summit?

RC: You know, I think one exciting idea there was unbelievable creativity and energy around was methane reduction. There were companies and organizations and think tanks and foundations and nonprofits running around with various technologies and strategies and ideas for helping the agriculture sector to decarbonize methane, and to use landfill, circular economy issues relative to biogas and biofuels. Methane is such a super pollutant that punches above its weight in negative impact.

There was a ton of consensus that hydrofluorocarbons elimination, which we’ve done as a state but sort of being in tune with that policy is in the works. And building efficiency. There was some fabulous suggestions around and ideas and policies around best practices from around the world.

I think another idea that got a lot of traction was decarbonizing the global supply chain through maritime and aviation. So the biofuels and the renewable hydrogen focus was very impressive. And so there’s much more traction on that field. I think a lot of people recognize there are some best practices from Nordic countries, from Asia, there’s ships being constructed in Japan and South Korea and elsewhere that run on renewable hydrogen.

The other issue, I think that I took away was a lot about water quality, and the impact of water availability, affordability and access, and has a profound effect on climate and the role that it plays. The last thing that I’m thinking about is the big momentum around offshore wind, a lot of momentum. California is talking about it and just got the first facilities on the East Coast. The amount of wind that can be generated is really something because what has happened is that technology has evolved, and they don’t have to be embedded in the seabed anymore. The floating infrastructure has evolved very rapidly over the last few years, so you’re seeing these substantial deployments around the world. So that’s sort of a best practice that I think has a lot of traction. The Quinault Nation announced the other day that they’re doing an offshore facility, or they’re exploring it.

RC: The inside negotiators who are working to try to hammer out agreements with 200 countries of course had a heavy lift, and there was a lot of stress. There’s no question. I think the common theme was how do we move from the Paris Agreement aspiration, to Glasgow action? How do we make it actionable? And the spotlight in many ways turned to states, cities, to regions, and to collaboration with the private sector. A lot of folks recognize that the meaningful work of climate is happening for real people living real lives on the front lines. And it’s not always about a piece of paper, right?

The human side of it, the passion side of it, was really about everyone doing their proportional part. So decarbonizing tough sectors, getting governments to agree shutting down coal, recognizing that we have to modernize our approach to natural gas, and all of these issues were on the table. I think it was almost a little bit like a science convention. There was no topic off course. Or, you know, there was no taboo.

There’s absolutely disappointments at the macro level. China and India, the lack of firm commitments to proportional national contributions in terms of emission reductions, the issues around lack of investment in Indigenous and disproportionately impacted communities. There’s a number of real disappointments. At the same time, the deep alignment at the sub-national level was really meaningful, as we’ve seen by virtually every major, well-regarded global brand company in Washington state has embraced the work of climate action as well as our state, and the regional collaboration and partnership was well-regarded of British Columbia, Washington, Oregon and California. It’s a strong partnership that is only growing by the day.