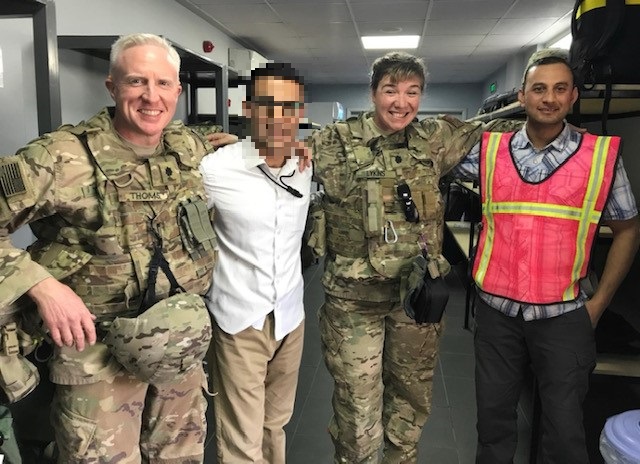 The swift collapse of the U.S.-backed government in Afghanistan in recent weeks has prompted the Tacoma City Council, state Legislators and Members of Congress to voice support for speeding up visa processing for Afghan translators and refugees.

The Tacoma letter was signed by the entire council and Mayor Victoria Woodards. Addressed to Secretary of State Antony Blinken, it urges his department to expedite processing of Special Immigrant Visas for Afghan translators and interpreters who supported  U.S. military operations.

The U.S. has created roughly 26,000 of these visas but actually completing the 14-step process can last three-and-a-half years. As many as 22,000 Afghan refugees could come to the U.S., with some settling in Washington State.

Tacoma lies next to Joint Base Lewis-McChord (JBLM), one of the largest military bases in the country. The base has been a major point of departure and arrival for military operations to and from Afghanistan. A recent video from the Kabul airport in Afghanistan shows a C-17 cargo plane taking off with refugees clinging to the side. The air wing it belongs to is based out of JBLM.

Because of the region’s connection to Afghanistan, the city council’s letter states:

“Few communities have deployed more service members for [Operation Enduring Freedom] than JBLM. Our community supports these Afghans who ensured our family members returned safely home. Tens of thousands from our community have been deployed to Afghanistan and have much gratitude and concern for their Afghan translators. We want to help them secure a place to call home.”

Already, roughly 200 Afghan refugees have arrived in Puget Sound, said Ariana Anjaz, senior director of the Afghan Health Initiative, a King County non-profit. The scenes from Kabul are personal to Anjaz, who has family members in Afghanistan, one of whom made it out on an evacuation plane.

“There’s a lot of chaos,” Anjaz said. “There’s no organization to help people.”

Many people have or may qualify for P2 visas, a type of visa that allows people who don’t meet the qualifications for a Special Immigration Visa to come to the U.S. But these are also hard to get, and oftentimes the waiting period can stretch up to 18 months, Anjaz said. She believes the federal government should expand the program and assist refugees looking to leave Afghanistan and find safety in the U.S.

Tacoma City Council member Robert Thoms also has a personal connection to Afghanistan. Thoms served in Afghanistan, most recently in 2018 as a public affairs officer for the Navy. He worked with two Afghan translators, one of whom is now living in the U.S., and another who is still in the country.

For Thoms, helping translators, who worked with the U.S., safely leave the country is an obligation.

“We have an opportunity to get this right, and this means helping get the rest of the Americans out of there, and our Afghan allies — partners that worked with us honorably — safely,” Thoms said.

Puget Sound has a long history of welcoming refugees following conflicts in the 20th century like World War II, and the Korean and Vietnam wars. Helping those coming from Afghanistan not only reach the U.S., but finding housing and securing jobs are not only ways to help them, but also a way to honor the sacrifices made by military members.

“Now our mission is to get our people back safely, and provide a pathway for our partners from Afghanistan. And if we do that I think it will provide some solace for those tens of thousands of people who served in Afghanistan that live in our state,” he said.

That’s in line with Tacoma’s stated goals. In 2015, the city declared itself a “Welcoming City.” Thoms said these declarations are usually ceremonial, but this provides a tangible way for the city to act on its commitment.

Anjaz said those interested in helping can also reach out to legislators and advocate for expanding immigration and resettlement pathways. As refugees arrive, welcoming them in while also providing space for them to work through trauma can help. The Afghan Health Initiative is also fundraising $500,000 to help support refugees with resettlement costs, housing, utilities, and other basic needs.

Elected officials both at the state and federal level have expressed bipartisan support for Afghan refugees. In the Washington State Legislature, Republican leaders Rep. J.T. Wilcox and Sen. John Braun penned a letter to the state’s Congressional leaders and Gov. Jay Inslee asking them to take “bold action” to help Afghans who had assisted the U.S.

“Afghanistan was America’s longest war. Two decades after we arrived, we now have a moral responsibility to the Afghans affected by our presence.

We must safely evacuate our allies and immediately process visas for refugees — no more red tape and no more delays.”

A letter signed by 75 Members of Congress was also sent to the Departments of Homeland Security and State, urging them to support Afghan allies. Washington State Reps. Derek Kilmer, Marilyn Strickland, Kim Schrier, Suzan DelBene, Rick Larsen and Adam Smith signed on to the letter.