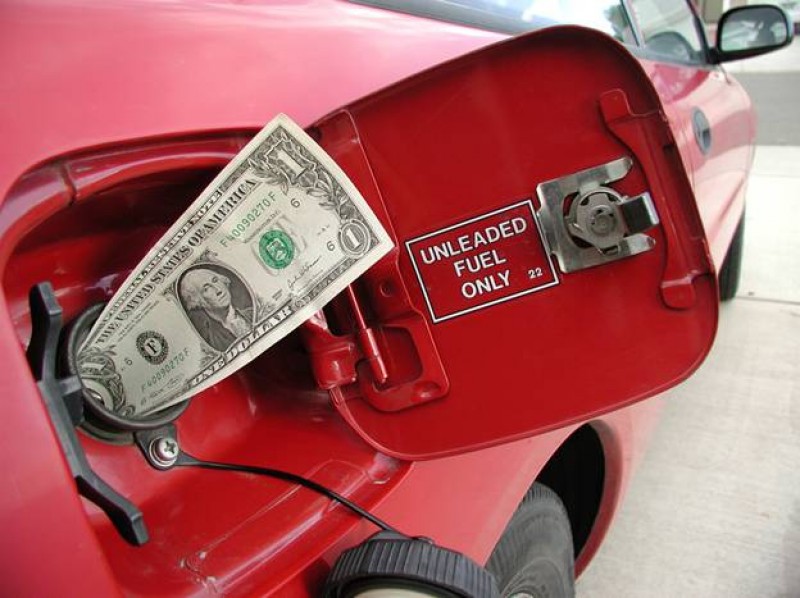 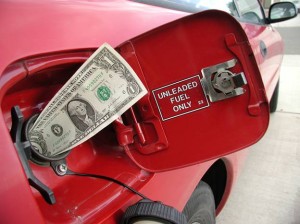 OLYMPIA, Oct. 4.—With a ruling Thursday that left transportation interests reeling, the state Supreme Court paved the way for lawmakers to impose new taxes on gasoline for any purpose they choose – not just highways.

The ruling upheld a state tax on hazardous substances, and at the same time ended the special status that transportation taxes have enjoyed for nearly 70 years under Washington’s 18th amendment. Good news for the environmental groups that have been trying to tax Washington oil refiners for Puget Sound cleanup, bad news for those who hope to sell the public on a big gas-tax increase for road construction. And it might be a big concern for any Washington resident who fills up at the corner pump. It destroys a fundamental article of faith for Washington voters and the state’s transportation lobby – that fuel taxes are sacrosanct.

It’s time to be very, very worried, says Tim Hamilton of the Automotive United Trades Organization, the scrappy service station association that brought the suit. “We don’t regret filing the suit, because we needed an answer,” he said. “But now there is a bullseye on everyone who drives a car in this state.”

The court’s 9-0 ruling dealt specifically with the state’s hazardous substances tax, a 24-year-old tax on fuel, pesticides and other chemicals. That increasingly lucrative tax, which now generates about $150 million a year, functions in a way very similar to a gas tax. The lion’s share, some 85 percent of it, is paid by the oil industry, and ultimately it is reflected in the consumer price of gasoline, somewhat more than two cents a gallon at current prices.

In a sense it took more than two decades for the case to reach the Supreme Court. Voters said yes to the tax in 1988 with Initiative 97, a ballot measure backed by environmental groups that created what is known as the Model Toxics Control Act. Even though the state constitution says gas taxes are supposed to be spent on roads, the money has never been used for that purpose. Originally the tax was supposed to pay for toxic-waste cleanup projects. But proceeds skyrocketed as gas prices rose over the years, and lawmakers found plenty of new ways to spend the money. In 2009 and 2010, they snatched $233 million from the MTCA account to plug holes in the state budget. Today they are using it to finance a cornucopia of environmental programs at the Department of Ecology. And when green groups suggested tripling the tax in 2010, to finance a big expansion in Puget Sound cleanup programs, Hamilton’s group said enough and took the state to court. Lawmakers were getting piggy, he said: “They had their nose in the trough.”

The lawsuit seemed like a good bet, based on seven decades of legal tradition. And indeed the court ruled that the hazardous substance tax is a fuel tax. But the challenge backfired in a big way. Rather than tossing out the tax, the court instead overturned the idea that gas taxes are untouchable. 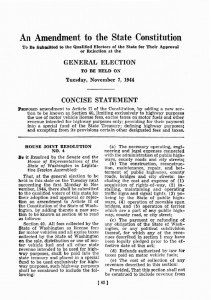 The 1944 voters’ pamphlet outlines what became known as the 18th Amendment.

It all hinges on six words in the constitutional amendment Washington voters passed in 1944. The main thrust of the 18th Amendment is to strictly limit the use of transportation taxes – meaning license fees, taxes on the “sale, use or distribution of motor fuel,” and any other tax intended for highway purposes. This state was among the many that passed similar constitutional amendments in the ‘30s and ‘40s when good-roads associations led an effort to keep state legislatures from using gas-tax money as a cash cow. The amendment essentially turned gas taxes into a user fee. Motorists pay the taxes at the pump and get the money back when they drive. Washington for the last 68 years has spent its transportation taxes on road construction, highway-related law enforcement, and the state ferry system, which is seen as an extension of the state highway network.

Where other taxes are concerned, the basic idea until now has been this:  If it looks like a gas tax and it behaves like a gas tax, then it’s a gas tax, and the money has to go into the transportation fund. That concept has blocked lawmakers from imposing new taxes on gas for purposes that go in and out of fashion, like bus transit, light rail, and most recently, environmental programs. As recently as 2001, the state attorney general’s office illustrated the principle when it issued an opinion stating that the state might be able to place a sales tax on gasoline without spending the money on highways, but only because a sales tax functions differently than a gas tax. Even then it said the courts still might see it as a gas tax.

But a decade later, when the attorney general’s office found itself defending the hazardous substance tax, it urged the Supreme Court to read the constitution a different way — and the court agreed. The 18th Amendment contains an exemption for taxes “not levied primarily for highway purposes.” The court said the hazardous substances tax was never levied for highway purposes and so it can stand.

It’s the Thought That Counts

“The HST statute was enacted to tax toxic substances, including motor vehicle fuel, for the purpose of cleaning up spills of hazardous substances,” the ruling says. “As a result, funds from the HST levied against motor vehicle fuel do not have to be used for highway purposes because they were never restricted to be used only for highway purposes.”

It is a simple decision with big implications. What it means is that the function of a tax isn’t the important thing; it is the purpose behind it. That makes it easy to get around the 18th Amendment. Every time lawmakers write a tax bill they include an “intent section” that explains its purpose. So now they can write bills that tax gasoline and diesel fuel and explain that the purpose is something other than highways.

When the case was heard before the Supreme Court June 14, AUTO attorney Phil Talmadge, a former Supreme Court justice himself, argued that no one ever intended it to be so easy. The exemption was written in order to preserve two taxes that existed in 1944, he said, both of which are substantially different than a gas tax. One was the state business and occupations tax, Washington’s tax on business gross receipts. The other was the motor vehicle excise tax, essentially a property tax on automobile ownership that was a significant revenue source at the time.

But in its ruling, the court said the historical context didn’t matter. It said the meaning of the six words is plain. “Nothing in that constitutional provision indicates that any new tax similar to a gas tax would require the Legislature to use the funds for highway purposes,” it said.

The decision won’t let lawmakers raid the state transportation fund. That’s because the existing state gas taxes have always been levied for highway purposes. But in recent years there have been plenty of ideas for other new taxes on fuel. One biggie is the “barrel tax,” suggested in 2009 by green groups as a way to finance Puget Sound cleanup programs, and which was proposed again this year by Gov. Christine Gregoire in somewhat different form. Or lawmakers could simply raise the hazardous substances tax, as was suggested in 2010: Environmental groups pulled out the stops and the proposal came within a whisker of passage. Each would have raised the price at the pump.

If lawmakers can pass gas taxes that have nothing to do with highways, transportation advocates fear it will be harder to win voter approval for big gas-tax increases earmarked for road-construction projects. The 18th Amendment has always represented a compact with the voters, explained Jerry VanderWood, spokesman for the Associated General Contractors – gas-tax money is supposed to go for roads, period. “Voters have shown in Washington state that when it is that cut and dried, they will vote for a tax increase on fuel with the understanding that the money is to be used for transportation purposes. So we would be concerned about any sort of decision or activity that would dent that compact.”