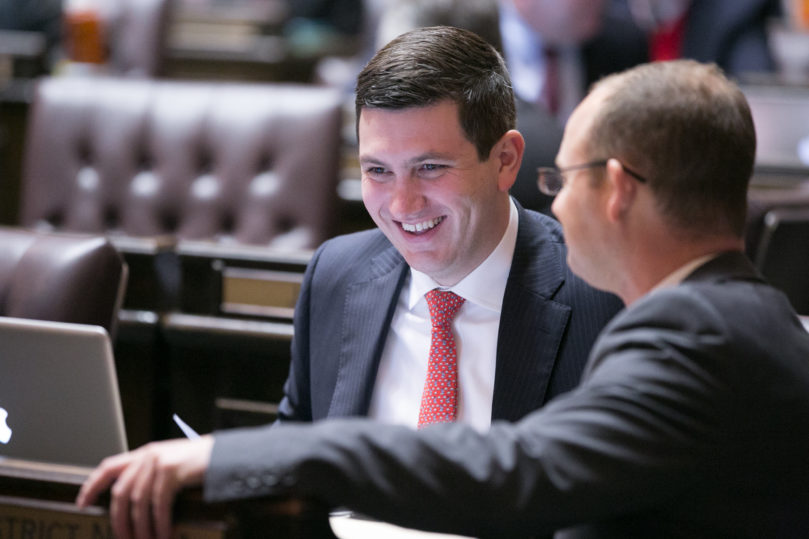 Stokesbary presses ahead with bill to permit compensation for college athletes

Rep. Drew Stokesbary is launching a renewed effort to pass legislation that would allow college athletes to receive compensation for the use of their name, image and likeness.

In a new iteration of his original bill which stalled in the Legislature last session, Stokesbary’s office said he is introducing a new version of House Bill 1084 designed to mirror California’s “Fair Pay to Play Act”. The California bill enables college athletes in the state to hire agents and receive compensation for endorsements.

Had the Legislature passed HB 2084 last session, it would have been the first piece of state legislation in the county to allow college athletes to get paid.

It’s time for Washington to treat its student-athletes like all other students,” said Stokesbary. “Only student-athletes are prohibited from receiving fair compensation for their services. All other college students, including those on scholarship, are routinely compensated for their skills, and they are celebrated for it. The NCAA has been using its monopoly power to force student-athletes to sign away the rights to their name, image and likeness. That must end.”

More so than last session, it appears the political tailwinds are blowing in Stokesbary’s direction.

In addition to the passage of similar legislation in California, the NCAA Board of Governors voted this fall to allow college athletes to profit from the use of their name, image, and likeness by 2021.

Speaking to the Wire in November after the Board of Governors vote, Stokesbary credited the NCAA’s swift change of position to pressure applied by state legislatures.

The idea that in less than 12 months, you could go from the NCAA saying ‘over our dead body will we ever compromise on this issue’ to them going out on their own and announcing they are going to compromise on this very issue, it’s astounding and virtually unheard of…And I absolutely think the change was brought about because of the pressure by state legislatures. The only thing that has changed in the last year is proposals in the state legislatures and media attention on those efforts forcing more people to confront the question of whether or not the NCAA’s existing model is really fair for the students.”

Also back in November, Stokesbary emphasized that regardless of the NCAAs willingness to compromise, the Legislature’s involvement is necessary to ensure any future rules changes go far enough.

If the states suddenly stop all that pressure, with time, the NCAA begins to rethink their decision and puts forth a rules change that amounts to a bare minimum. Maybe something like, only two athletes per team get to make a deal like this, or maybe an athlete can do it but the school gets to have veto power over it, or maybe we’ll have a cap at $100,000 per year. There are a number of ways in which the NCAA could make a token effort at change.”

The new version of the bill is scheduled to be heard in the House College and Workforce Development Committee on Tuesday, Jan. 28 at 1:30 p.m.