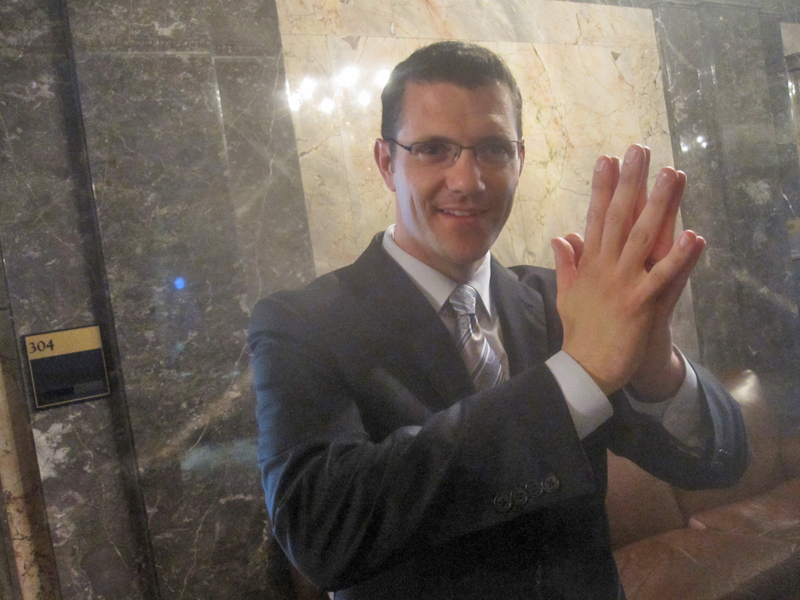 Still No Deal on Budget – Transportation Taxes, Drunk-Driving Measure to Get House Votes in Meantime 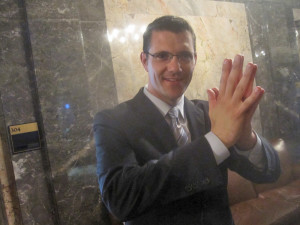 Update, 4:15 p.m., June 24 — The House adjourned for the day without taking action on the transportation or drunk-driving measures. Some 12 members were absent Monday. Now Tuesday action is expected.

OLYMPIA, June 24.—You want to know how far apart lawmakers are when it comes to a budget deal?

They’re this far apart, says state Sen. Joe Fain, R-Auburn, as he presses his hands together.

It might be that lawmakers are only a molecule away from a deal, but apparently that molecule is not the squishy sort. Since last Thursday the eight solons who have been meeting behind closed doors have been telling the other 139 that a deal will be struck momentarily. But when the rest of them returned to town Sunday for what many hoped would be a quick series of votes to end the session, there was no deal for them to debate. Or even discuss. It became clear that scheduling floor sessions in the House and Senate Sunday did nothing to light a fire under those who are negotiating a budget. “This was a pretty ridiculous day,” snorted state Rep. Cary Condotta, R-Wenatchee. “As a veteran I should have known better – you don’t come back unless there is a deal, and there is no deal.”

Now, because of the lead-time it takes to prepare a budget bill once a deal is struck, it is looking like mid-week will be the earliest lawmakers will be able to adjourn. At least in the House, they will debate the idle time away by finally taking a vote on a much-talked-about transportation tax package. Also up today is a measure that imposes stiff new penalties on those who are accused of drunk-driving offenses, even without a conviction. The measure is a priority for Gov. Jay Inslee. Originally the two bills were expected to surface Monday, but the vote was delayed and now is expected to take place Tuesday.

Lawmakers are essentially killing time while they wait — no telling if those bills will actually pass this session, but it beats drumming their fingers on their desks. Adding pressure is the fact that the state faces a deadline for the passage of a budget as a new fiscal year begins July 1. Thousands of layoff notices will be sent to state employees today because of the uncertainty and because of state law requiring one week’s notice. Although it appears impossible that lawmakers will pass a budget by the time the last mail pickup takes place on Monday, lawmakers wonder whether the notices will have to be mailed if a handshake agreement takes place by that time.

As always, those involved in the negotiations are doing their best not to give away their secrets. But as 147 mostly-unoccupied solons found themselves in the House and Senate for what turned out to be a few minutes of floor action Sunday – routine budget-related bills that might been passed at any time — there was plenty of opportunity for gossip and grumbling. Somewhere in all the chatter Sunday, and amid all the rather vague statements of fuzzy optimism and indistinct progress regarding the budget talks, there actually were a few details worthy of note.

Taxes No Longer an Issue 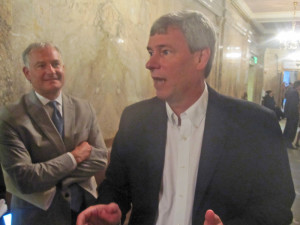 Neither side is saying what exactly is keeping them from striking a deal, but it appears taxes aren’t it. House Democrats came to the table in April with a proposal for a $1.3 billion tax increase, a non-starter with the Republican-leaning coalition that holds the majority in the Senate. Later the House Ds offered to split the difference; the other team didn’t think much of that argument, as it considered the $1.3 billion figure absurd in the first place. Republicans are saying that the more adamant Democrats became on the subject of tax-exemption eliminations, the more resistant Republicans became about their opposition to new taxes. On Sunday, House Majority Leader Pat Sullivan confirmed that taxes are no longer a major topic in the discussion. “Right now we are not talking about revenue,” he said. “We are talking about the budget itself.”

Indeed, the big debate right now seems to be about how much to spend on education — and of course that implies an even bigger debate over spending on everything else. The Senate would provide $1 billion to implement the state Supreme Court’s McCleary-decision mandate, which requires big new spending on K-12 education at a time when state-government revenues will increase by roughly $2 billion. The House would spend less than that, perhaps the $700 million contained in their last budget proposal. Said House Appropriations Chair Ross Hunter, “They would like to cut existing human service programs and cut existing compensation, actually healthcare, for state employees, in order to hit an arbitrary numerical target they have.” 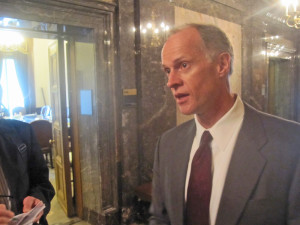 Not that Senate leaders are so dismissive. They say spending for education is one of the fundamental issues of the year. And if there isn’t enough to pay for everything the House would like to see, Senate Majority Leader Rodney Tom, D-Medina, said his team is happy to offer more money. The Senate will pass a telecommunications tax bill worth $85 million if the House Democrats are willing to pass a workers’ comp reform measure that would expand a now-rather-limited claims-settlement program. It was the clearest statement yet of the Senate’s position.

Of course that workers’ comp bill is one of the most controversial bills of the session, thanks to the opposition of the Washington State Labor Council. The council is one of the biggest-spending supporters of Democratic campaigns. Tom said he believed the worker’s comp measure, SB 5127, would have broad support in the House if Speaker Frank Chopp would allow a vote to take place, but he said the measure has been blocked in the House because of labor opposition. “The moment he passes workers’ comp, we get telecom,” Tom said. 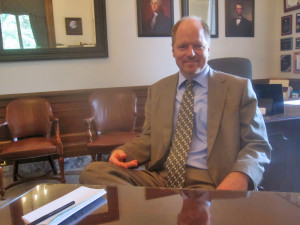 It appears that the office of House Republican Leader Dan Kristiansen, R-Snohomish, has become the neutral meeting ground for all parties in the budget dispute. One could see the procession of budget-writers and legislative leaders in and out of the office all afternoon. Because Republicans are in the minority in the House, the caucus has little power itself in the discussion. And Kristiansen said he hopes to do whatever he can to mediate conflicts of personality and policy. A deal is probably hours away, he says.

“We just need to tighten down some bolts and put some oil in this baby and fire it up and we’re out of here,” he said. “We’re that close, and I think the role that I have in it is one where I’m just trying to keep people on task.”

A Jump-Start for Transportation 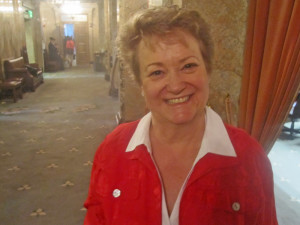 Transportation interests are getting set for what might be a final push for a transportation tax package; some 40 lobbyists representing transportation interests gathered for a pre-scrimmage pep talk Sunday in the office of Gov. Inslee. Although there is some talk of extending the session to deal with transportation, an issue that has gone seemingly nowhere so far this year, transportation advocates say this might be their last best shot. Conventional wisdom is that there will be little willingness by lawmakers to remain in the capital city when the budget is done. Ferry-union lobbyist Gordon Baxter said, “we are down to it. We have to get this done. The operating budget — as soon as that gets done, they’re going to be out of here. And so we have got to have a transportation package that can pass both houses and both houses can live with.”

And of course, the key thing is that there will be nothing much else for lawmakers to do for the next day or so. The effort will begin in the House, where a vote is expected to be taken this afternoon on an $10 billion proposal by House Transportation Chair Judy Clibborn, D-Mercer Island. Though the measure has been a subject of debate all session long, the bill has never reached the point of a floor vote. Among its most important features, the bill would increase gas taxes by 10 cents a gallon over 10 years. Among its most controversial, it provides money for the Columbia River Crossing at Vancouver, and it eschews a public referendum on the tax increase. Business interests say they are willing to pay for a campaign to defend the actions of the Legislature, should an opposition initiative be filed, but they are not willing to finance a full-bore campaign.

Clibborn said she hopes the 11th-hour vote will set negotiations in motion. “I’m hoping we can come to some sort of agreement,” she said. In the Senate, Transportation co-chair Curtis King, R-Yakima, has been circulating a competing proposal, with no money for the Columbia River Crossing; the Senate coalition wants a public vote, he said. It’s going to be difficult jump-starting the transportation debate at this point, he said.

“What this is is the 165th day. We knew from day one where we were and what it would take to get this package moving, and to try and do this in the last few days — hopefully the last few days – of our second special session makes it very difficult to accomplish.”