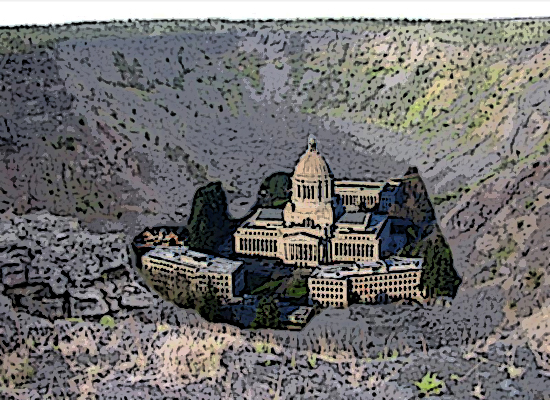 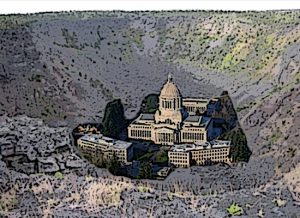 OLYMPIA, Nov. 30.—As lawmakers gather at the state Capitol for a preview of the troubles they will face next year, it’s looking like the first question is how deep is that hole, exactly?

But it’s safe to say that right now you might say they’re peering over the edge of the pit and finding the view very murky and very dark. A debate seems to be looming over the amount that will be required in order to satisfy a recent Supreme Court decision that the state isn’t doing enough to fund K-12 schools – most lawmakers have been figuring on about $1 billion, but if some have their way it could be a heart-stopping $2.5 billion. And until they reach agreement on the size of the problem, it ain’t gonna be easy finding solutions.

Here’s one description of the challenge, offered Thursday to the House Ways and Means Committee with all the precision that appears possible at the present time. Staffer Dave Johnson told lawmakers, “I think the takeaway is sort of a minimal 2-billionish shortfall.”

Lawmakers are gathering at the Capitol this week for their traditional pre-session get-together, electing new leaders for the coming year and taking the first peek at the issues that will occupy them when they get down to business Jan. 14. As always, the most important action Thursday wasn’t the discussion in the committee rooms – it was the buzz in the hallways as the entire Olympia community gathered for the first time since the election.

Among other things, there was plenty of talk about a way to pass a tax increase without forcing Gov.-elect Jay Inslee to go back on his campaign promise to veto anything that crossed his desk. Could be simple. Just send it to the voters. The governor wouldn’t have to sign.

Blame it on the Supreme Court 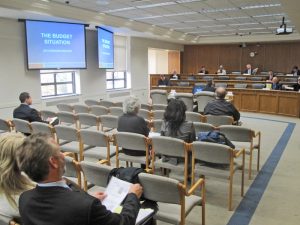 “The Budget Situation” was the first order of business before the Senate Ways and Means Committee.

Presentations to the House and Senate budget committees made it clear Thursday that if it hadn’t been for the Supreme Court, they might have been able to squeak through the next session with a minimum of yelps and screams. The key task for the next session, as always, is the writing of a budget. Right now it’s looking like the state will have about $2 billion more to spend for 2013-15 than it did last time around. But if you take all the state’s current programs and every spending increase already on the books, the state is about $900 million short.

What the staff presentations demonstrated is that lawmakers might have found that problem simple. For one thing, the state will have about a half-billion dollars in its rainy-day fund. That money can be tapped with a vote of the Legislature. As for the rest of the gap, some $362 million in increased spending is mandated by Initiative 732, the 12-year-old ballot measure that requires cost-of-living increases for teachers. Most years the Legislature has ignored that requirement. It also could close $276 million of that gap by reenacting a hospital “safety net assessment,” a complicated financing mechanism that leverages additional Medicaid dollars from the federal government by placing what amounts to a tax on the state’s hospitals. That assessment is due to expire at the end of June. “Obviously one option for you is the reauthorization of that assessment,” said Senate staffer Byron Moore. “That would obviously need to be looked at in the overall healthcare context and budget context.”

So those three items alone could cover the state’s needs and leave it with a few hundred million dollars in the bank, without any other reprioritizations of programs or efficiencies. But then comes McCleary.

The Supreme Court’s decision in the McCleary case held that the state wasn’t meeting the obligation set forth in the constitution making funding of the public schools its “paramount duty.” The court suggested the obligation might be satisfied if the Legislature found a way to pay for a couple of ambitious education bills from 2011 and 2012 that it never got around to funding. And therein lies a debate.

The cost of enacting those basic-education enhancements would be about $1 billion. But a joint legislative task force charged with making recommendations to next year’s Legislature appears to be aiming a little higher than that. A proposal made by the panel’s chairman, — Vincent, would roll in other proposals for higher salaries and program improvements and bring the total cost to $2.5 billion for the next two years alone.

Some like the idea, others roll their eyes. During Thursday’s hearing, state Sen. Steve Conway, D-Tacoma, said lawmakers shouldn’t be limited in their goals by a narrow definition of basic education. “What I’m trying to figure out is why is HB 2776 the measure of what basic education requirements are and what the enhancements have to be to basic education.”

And state Rep. Gary Alexander, R-Olympia, the House Republicans’ point-man on the budget and a member of the task force, said he thinks it’s a whopping big mistake for the Legislature to spend anything more than it has to. “The issue is that the education funding task force has expanded their scope beyond what is just required for McCleary. The number has not got larger. It is the scope of their objectives that has got larger. They ought to come back and deal with just the McCleary decision.” 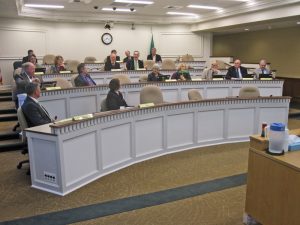 The House Ways and Means Committee holds its final meeting Thursday. Majority Democrats in the state House are planning to split its functions next session, creating two committees — one for taxing and one for spending.

Meanwhile you could hear the buzz begin about the tax increases that might be required to pay for all that new spending. Outgoing Gov. Gregoire is expected to advance a tax proposal before she leaves office, and a few ideas have been raised within the task force – among them extension of a beer tax and a business and occupations tax surcharge, both of which are due to expire. But those ideas by themselves won’t be enough to do the trick.

One idea making the rounds of the hallways is that the Legislature might send a tax to the ballot, thus bypassing the governor’s desk and making it easy for Inslee to avoid carrying out his campaign promise to veto any tax increase laid before him.

Senate Democratic leader Ed Murray said, “I believe that we should try to find a revenue package that we would try to put on the ballot at some point in the future — whether or not the future is next year or the next two years, I don’t know. But that is my personal opinion. I don’t think you get out of the McCleary issue and repair some of the damage that we’ve done our higher education institutions unless at some point we talk about new revenue.”

Murray said it might be the only way to pass a tax increase, noting Inslee’s campaign promise and acknowledging that there are not 25 votes in the Senate for taxes. “I get the reality the votes aren’t here, and the Governor-elect says he won’t sign it. So if there is a proposal, it is going to take an agreement and it has really got to be the business and labor and education advocates and interest groups coming to a grand compromise around reform and revenue. Otherwise everything that we would send to the ballot would fail and it wouldn’t be worth their time.”