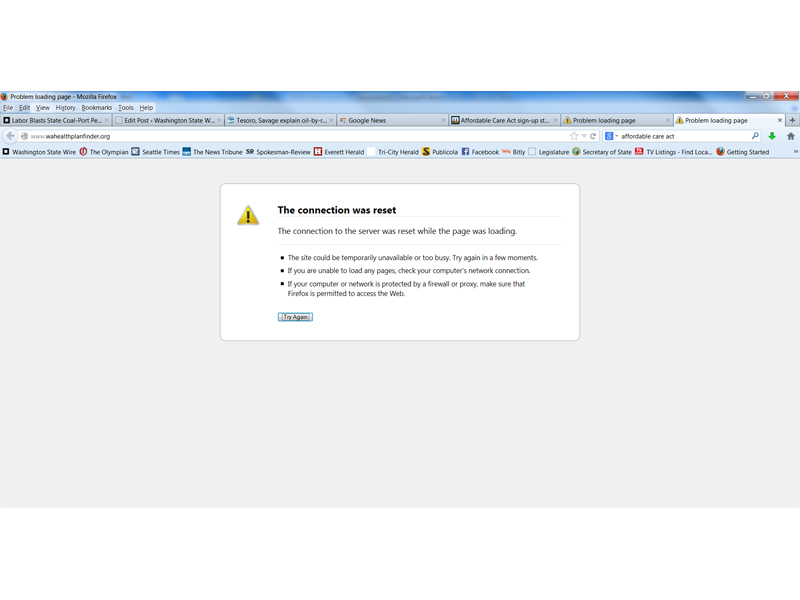 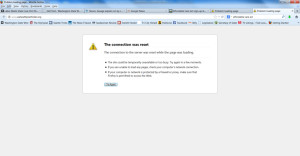 Visitors to the state’s new health-insurance website were greeted with the deadly site-not-working screen as it opened for business Tuesday.

UPDATE 3 p.m. Oct. 1 — The Washington health benefits exchange announced that as of 1:30 p.m., the Washington Healthplanfinder website was back up and running. But because of “intermittent issues,” users who are completing applications might want to “save frequently”– no telling when the next crash might occur. The site will be taken offline at 8 p.m. Tuesday night for further work.

OLYMPIA, Oct. 1.—Operators were standing by but the website was down, as Washington’s new health benefits exchange opened for business Tuesday — the centerpiece in this state of the new world of health care reform under the Affordable Care Act, or as everyone seems to call it, Obamacare.

Don’t worry, you can call it that. The governor says so. At one of two media events that marked the occasion Monday, Gov. Jay Inslee told reporters in Olympia, “This is called Obamacare, and over 5 million more people voted for the president that started Obamacare than the other candidate. America has spoken on the subject, and we need to move on in a bipartisan fashion, and we are ready to do that, and I am happy.”

Ready? Maybe not. The state-managed health-insurance website, dubbed Washington Healthplanfinder by its marketers, was taken offline immediately after the Tuesday morning launch. The agency reported that some users were encountering long load times and said the site was taken down for maintenance. But once it works, anyway, the website and the state call center in Spokane will be the public face of an operation that has taken some three years to establish, representing a radical revamping of the health-insurance market. Washington is one of 16 states that are going it alone in establishing their own health-insurance marketplaces; others are leaving the nitty gritty work of revamping the insurance market to the feds.

For the first time, uninsured Washington residents can shop for coverage on what appears to be an easy-to-navigate website (www.wahealthplanfinder.org) allowing customers to compare one plan to the next. Reporters got a look at the way the site is supposed to operate at a media event in Seattle Monday, and indeed, when the site is functional it appears to be a relatively quick process – about 10 to 15 minutes to sign up. But contrary to promises, the insurance isn’t cheap. The least-expensive policy for a hypothetical man of 51 living in Olympia is $297 a month, about equal to a payment on a $15,000 automobile but without the car, an enormous hit to the household budget for anyone who does not currently have health insurance. Cost may be reduced somewhat for those who make less than federal income guidelines.

A big step, to be sure. It has been a mammoth undertaking for the state officials charged with developing the exchange and the website, and for the insurance companies that have had to comply with an entirely new set of rules as they develop standardized insurance policies. Political debate and setup disputes have roiled Olympia ever since Congress passed the law. But now comes the real test. Will Washington residents rush to buy? 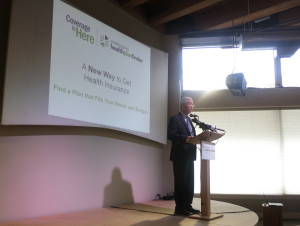 State exchange officials are doing their best to downplay expectations about the numbers who will purchase insurance on the exchange. They say they expect to sign up about 130,000 Washington residents by the time the first open enrollment period ends March 15, and about 280,000 eventually. That’s a big portion of the 1 million Washington residents who do not currently have health insurance; the lowest-income Washingtonians will be covered by an expansion of Medicaid. 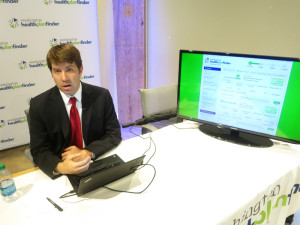 Everyone is supposed to obtain insurance – that’s one of the big-picture concepts behind the law. Those who fail to obtain health insurance in 2014 will be required to pay a rather small $95 penalty when they file their 2014 taxes in 2015. That penalty will increase to $325 or 2 percent of income in 2016, and to $695 or 2.5 percent of income in 2016. The mandatory nature of the insurance coverage has sparked national debate – it was the reason former Attorney General Rob McKenna joined a lawsuit filed by Republican attorneys general and governors that aimed to overturn the law. But the U.S. Supreme Court last year declared the law constitutional, and since then state officials have raced to establish the rules for the new marketplace and for the policies offered by private insurance companies. A last-ditch effort to delay the Affordable Care Act is at the heart of the current congressional debate that has shut down the federal government.

But the policy disputes in the other Washington have had little effect on the state officials who have been charging full-speed-ahead in developing the marketplace. “We don’t know if the feds really understood the amount of work they gave to the states and the interdependency they required of the states to make this a success,” said exchange director Richard Onizuka. “It is a great feeling to be here today in celebrating what we are are launching tomorrow, with functionality of a full consumer portal.”

‘We Can Expect Some Glitches’ 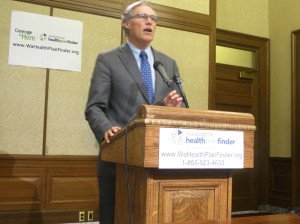 Inslee: “We can expect some glitches.”

There still is plenty of uncertainty about the way the new system will work. Consider the sticker-shock of the new policies and the relatively low first-year penalty for failing to obtain insurance. One might find an incentive to avoid signing up. The website immediately reduces the bill by applying a federal tax credit to the premiums when calculating the monthly charge, meaning customers don’t have to wait for a tax-refund check. But it appears the website’s calculations are based on gross income rather than adjusted gross income — so individuals who make more than the $44,000 a year threshold for tax credits will be required to pay full cost up front.

And there are other big glitches. The state had hoped to launch a small-business exchange for businesses of 50 or fewer employees that wish to provide insurance for their employees. On the exchange it would have been possible for at least the smallest employers to obtain tax credits to defray the cost of insurance. But there were no takers for the business among the insurers who serve most of the state, and the program is available only in Clark and Cowlitz counties. Half of small businesses provide insurance at present, with or without a subsidy, and while non-exchange policies continue to be available, small business employers may find reason to ditch their coverage altogether and tell employees to buy their own insurance on the exchange. Onizuka said the exchange can handle their business without financial or management difficulty.

But the biggest problem may be a lack of public awareness. After years of national debate, after all the shouting and furious protests on both sides, Obamacare is finally here, said state Sen. Karen Keiser, D-Kent. But how many people really know? “Our concern is that so many people are still unaware about this,” she said. “It is incredible how few people know the Affordable Care Act is here and that it is underway. Unfortunately, all the controversy and political infighting that has gone on has caused confusion, and confusion causes people not to do anything. So our real struggle is to get the word out that we are doing this, and that people will be able to have affordable health care.  That is a totally different scenario than being overwhelmed with people in the first few hours.”

Thus the message of the day – whatever is going on in Washington, D.C., health insurance in this Washington is now available for any taker. “The Healthplanfinder is a technological feat, and as with all new technology we can expect some glitches,” Inslee said Monday. “…What I share is the hope that people will simply go and take a look at the website tomorrow.” Once it’s up and running, of course.