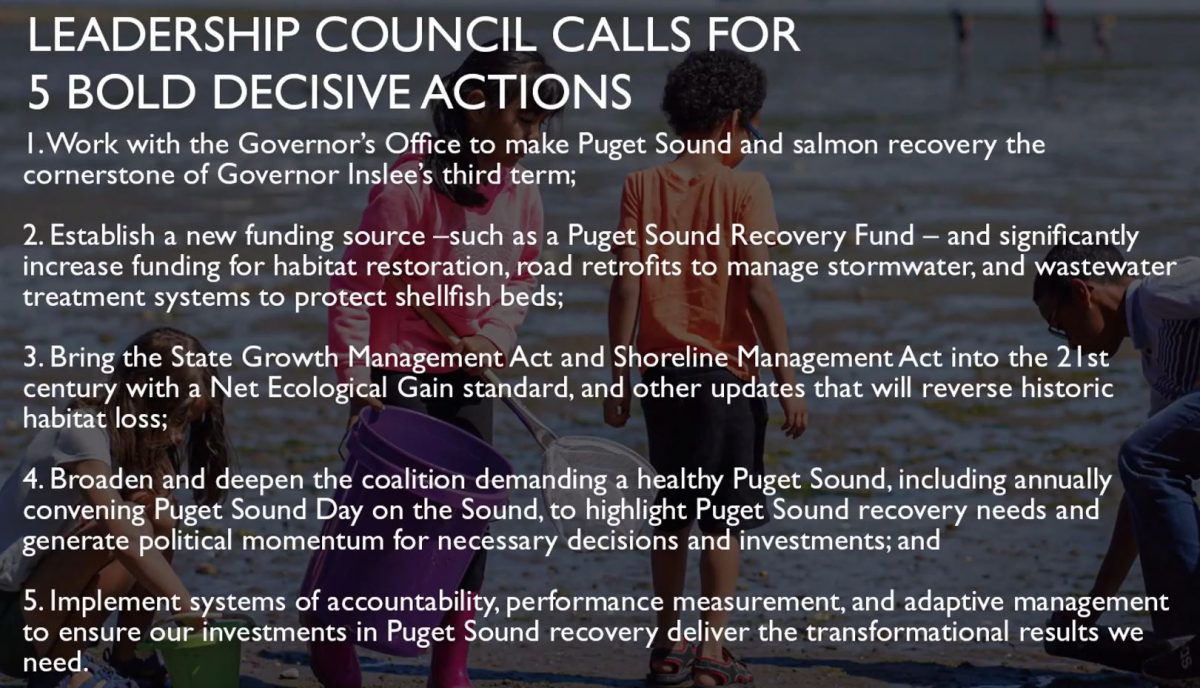 A State of the Sound report preview

While the annual State of the Sound report isn’t due out until Nov. 1, an overview of the report was presented at a Puget Sound Partnership Leadership Council meeting this week.

The biennial report is required by state law, and provides an update to lawmakers and state officials on how environmental recovery efforts are progressing, on ecosystem health and progress toward Puget Sound recovery goals, and how partner organizations can assist in the recovery.

Jon Bridgman, communication manager for the Puget Sound Partnership, said the report shows that when tribal, federal, local and state stakeholders work together they can meet conservation goals.

However, when taken together, the signals in the report show that the state is not meeting its recovery goals.

Of five indicators that assess the health and resiliency of Puget Sound, only five are meeting their targets, while 23 are not. The specific indicators were not released at the meeting but will be available in the full report.

“We are not doing enough,” Bridgman said. “Our current efforts will not lead us to a resilient and recovered Puget Sound.”

Central to this, Bridgman said there continues to be a funding shortfall from the state, as there has been over the last decade. Six of the most highly ranked capital funding programs have consistently received less funding than they requested.

An example of this is the Puget Sound Acquisition and Restoration Fund, which has only been funded at 55% of what it requested over the last 10 years, resulting in a $200 million funding gap, Bridgman said.

All five calls can be seen in the screenshot below, taken during the meeting.

Bridgman said the report does contain some bright spots, including strong support from Washington’s Congressional delegation which are working to pass the federal Puget SOS Act. This act would establish a Puget Sound Recovery National Program Office within the Environmental Protection Agency to coordinate protection and restoration efforts. It would also authorize $50 million each year for five years to carry out this work.