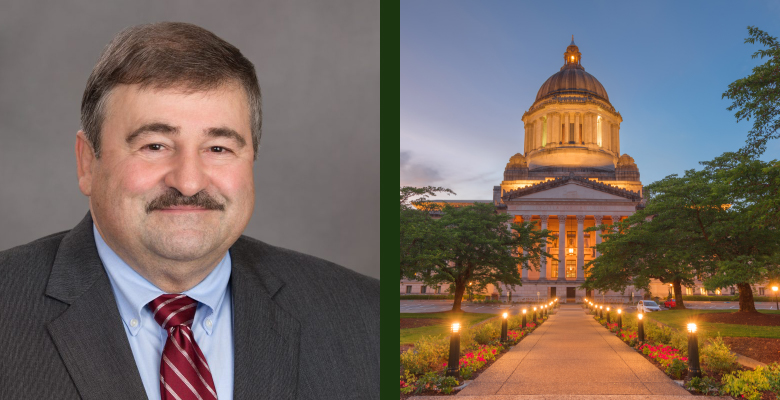 Former state legislator Mark Doumit has passed away at the age of 59. Doumit represented the 19th Legislative District in the state Senate from 2002 to 2006. Prior to this he served in the House of Representatives from 1996 to 2002.

In 2006, Doumit resigned his seat in the legislature to become the executive director of the Washington Forest Protection Association (WFPA).

Doumit is remembered as a lawmaker who built trusting relationships with legislators on both sides of the aisle.

“Yesterday afternoon, I learned with sadness and shock of the death of my friend of nearly 40 years – Mark Doumit. Mark was probably the most trusted person in Olympia and the best example for Republicans and Democrats alike. He was a public servant most of his adult life. And as Executive Director of the Washington Forest Protection Association, Mark was deeply involved in almost all important negotiations on the environment, economy and salmon recovery.

“Mark has a strong family. His wife, Mindy, and three sons – Matt, Ben and David – will continue to make him and all of us proud.”

“Mark Doumit was a problem-solver, and a leading voice for our state’s natural-resources community, someone who understood that behind every issue there are people, and that negotiation and compromise are the keys to getting things done.”

“As a newly elected member of the Legislature from the 19th Legislative District, I was delighted to meet Mark and get to know him. He represented our district for 10 years — in the House from 1997 to 2002, and in the Senate from 2002 to 2006 — and he was something of an elder statesman for Southwest Washington. Always approachable, always free with comment and advice. He understood what is at stake in the debates currently playing out before the Legislature. Not just that, but he also knew how those arguments got started, and how people’s positions had changed over time.

“Mark’s death is a tremendous loss to the 19th District, to the state’s natural resources community, and to Olympia. He will be missed.”

“Mark was always focused on protecting natural resources, from forests to fish, for everyone. When he left the legislature, he went on to lead the Washington Forest Protection Association. Generations of Washingtonians, who might never know Mark’s name, will benefit from his leadership on behalf of our forests.”

“Mark will be greatly missed in Olympia and throughout our state. Our hearts are with his family and friends.”

“Mark will always be remembered as a leader who brought forestry back to importance in Washington state.”

“He was passionate and always up for an adventure. Thanks to the staff Mark assembled, WFPA will remain a thought leader in the legislature and natural resources sector and an example on how to work collaboratively.”