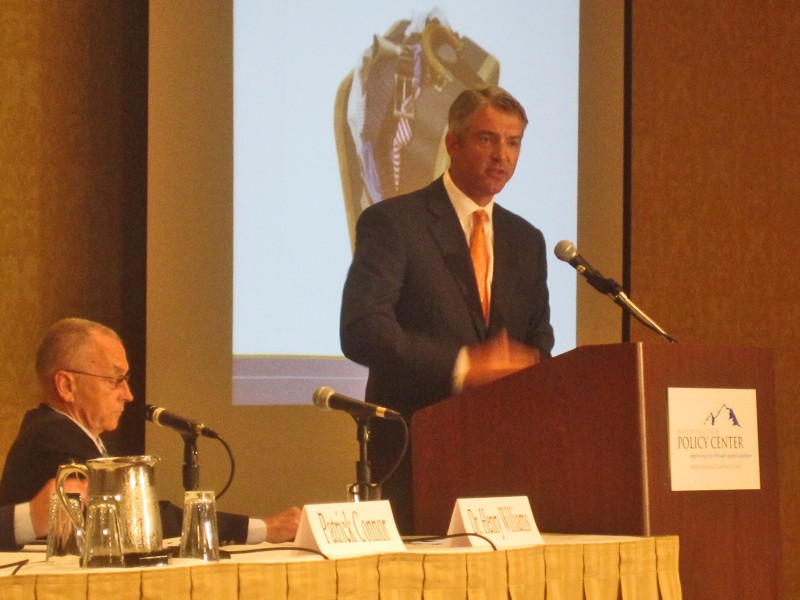 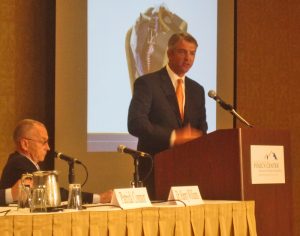 OLYMPIA, July 12.—If you think the cost of health insurance is going to go down under health care reform, think again, says the CEO of Washington state’s largest individual-insurance health plan. Many purchasers of individual insurance plans may see premiums rise 50 to 70 percent.

It was a statement Tuesday that hushed the room at a health care policy conference sponsored by the Washington Policy Center at the Doubletree Inn at Seatac. The policies that drive those numbers are no secret. They are embedded in the Affordable Care Act, which has been the law of the land since 2010. But with the Supreme Court’s decision last month to uphold the law it has become clear that health care reform is coming. Jeff Roe’s statement might be taken as a word of warning. Fasten your seatbelts. It’s going to be a bumpy ride.

“This is massively bigger than we appreciate, and may be bigger than we are capable of pulling off successfully,” said Roe, senior vice president for employer and individual markets at Premera Blue Cross and CEO of its affiliated company, LifeWise Health Plan of Washington. Someday, he said, the nation might be able to “look back and see if we landed safely and squarely and whether it is a step forward. Today I think the answer is unknown.”

Roe’s comments created a buzz at the conference, where most attendees had some connection with the health industry or state policymaking circles. Given the complexity of the new federal law and the raft of new state laws designed to implement it, it has been difficult for anyone outside the insurance business or regulatory arena to translate it to a bottom-line number. But Roe’s figures, based on an analysis of his own company’s book of business, tied it all together. They challenge one of the central assumptions many have had about the new system that is just around the corner in 2014. Many figure that competition on insurance “exchanges,” the new state-by-state marketplaces for insurance policies, is going to drive costs down. In fact, costs are going to go up, and for the typical buyer of individual insurance policies, the increase might cause the jaw to drop.

At the very least, Roe argued, state policymakers now implementing health care reform need to avoid decisions that would further drive up the cost of insurance.

Reasons for the increases are all a bit technical, as is seemingly everything associated with the new law. A key point is that right now, most people who buy their own insurance policies, rather than obtaining them through their employers, try to minimize premium costs by buying policies with larger deductibles and copayments. But under health care reform, insurance policies will have to provide a richer level of benefits. The typical LifeWise customer purchases a policy with an actuarial value of 0.4 – meaning that the aggregate percentage of medical costs that are paid by the health plan rather than the customer is 40 percent. Under health care reform, plans that are sold on exchanges must have a value of at least 60 percent. So that means the benefits package has to be 50 percent richer.

Under the federal law, insurance companies can offer policies outside the exchange as well. But the Washington Legislature passed a law this year that essentially says insurance companies must provide the same policies outside the exchange as they do within it – because without the rule, state regulators argued that customers would flee and buy less-expensive insurance on the open market.

Add the effect of the mandates and taxes that are embedded in the act, and the fact that insurance companies will not be able to deny coverage to those with a pre-existing condition. Then add the fact that customers now served by the state’s program for high-risk customers will be entering the general insurance population. It becomes clear that the cost of the typical insurance policy will go higher, Roe said.

And the law doesn’t provide much relief. The law will offer subsidies in the form of tax credits to those who make less than 400 percent of the federal poverty level. But most current purchasers of insurance policies will not qualify, and for those who do, the subsidies may not be enough to offset the cost. That’s because the subsidies will be set on a sliding scale based on income.

“I think it is staggering that in fact the Affordable Care Act increases the per-person cost of health care from $9,000 to $14,000,” he said. “I find that just staggering. To focus in on two costs, though, I think really drives home that point.

“The first is that in the individual market, we expect the cost of premiums to go up anywhere from 50 to 70 percent. Staggering amounts, and I can build that up for you this way.

“Our most popular plan in the market is our WiseEssentials Rx plan. It is a catastrophic plan with an actuarial value of 0.48. The minimum in the market allowed under the ACA is 0.6. So just on that basis it is a 25 percent increase.

“We expect the uninsured to add 15 percent in additional costs, because we know that they are less healthy than those in the system today, and if we get entrants from the high-risk pool, we can expect costs to go up another 11 percent.

“So put that all together, compound it, and you are easily at 55, 60, maybe even 70 percent. Those are enormous increases.

“And by the way, we talk about the subsidies and the benefits those subsidies provide. The fact is, there is a huge portion of the population that will not benefit from the subsidies.

“Seventy-five percent of our LifeWise Washington membership today is above 400 percent of the federal poverty level and will see no benefit from subsidies.”

In the small-group marketplace, meanwhile, where many employers purchase insurance, Premera estimates that risks will increase 7 percent to 9 percent, Roe said. “So there is another 7 to 9 percent in costs.”

It should be noted that the premium-increase figures cited by Roe will not apply to everyone, points out Premera spokesman Eric Earling. There are plenty of variables. Certainly those who already are buying more-generous insurance policies will not see so great an increase. Perhaps it is safer to say simply that premiums will rise profoundly. But that’s the central message. Under health care reform, insurance premiums aren’t going down, and it’s something people better plan for.

In his presentation, Roe noted that insurance companies aren’t making the fat profit margins that many assume. In Premera’s case, it is 1 percent to 2 percent. Though 85 percent of the premiums collected go to medical services, leaving 15 percent, Roe said most of the remainder is consumed by such expenses as administrative costs, distribution costs and premium taxes.

He pointed out that the biggest insurers have been losing money on the individual market. Last year LifeWise lost $11 million, Regence lost $23 million and Group Health lost $6 million.

Premera attributes about one-third to one-half of the losses to regulatory policies that have eroded the rules surrounding the state’s high-risk insurance program. Basically, health plans in Washington state utilize a questionnaire that is designed to screen out the highest-risk patients, about eight percent of the population. They are eligible for the separate state program, which is subsidized by taxes on insurers. But regulatory changes have exempted about 40 percent of new insurance enrollees from the questionnaire. That has big implications for the new world of insurance that is around the corner in 2014, when “guaranteed issue” becomes the norm.

Roe called for more transparency in medical costs, mechanisms that would make consumers responsible for their medical-care choices, and rules that would penalize customers who drop insurance when they don’t need it and try to re-obtain it when they do. If regulators attempt to suppress rates, he said the state risks a repeat of the meltdown that took place in the late ‘90s, when insurers lost hundreds of millions and pulled out of Washington state’s individual insurance market. Premera, like other insurers, argues against efforts by the Office of Insurance Commissioner to consider companies’ surpluses in setting rates – essentially requiring them to take money out of the piggy-bank in order to keep rates low. The companies argue they may need it because of all the uncertainties ahead.

“The industry is in a perilous place right now, and I think given the additional costs that are on the horizon related to benefit increases, at minimum, it is going to be a real challenge going forward,” Roe said. “And it is why we say we need to have all parties represented here [at the conference] and in government to make the system more efficient than it is today, and in the process more affordable.”