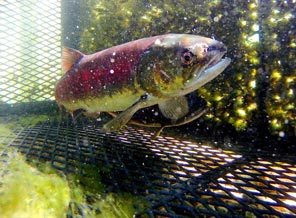 Kurt is the executive director of Northwest RiverPartners (NWRP)—a not-for-profit organization that advocates hydropower for a better Northwest. Kurt wrote the following commentary about the Snake River Dams and salmon declines.

Before taking the helm at Northwest RiverPartners last March, I knew the region had been deeply divided over the lower Snake River dams for decades. When I accepted my role, I truly felt that with a respectful tone and an open mind, I could perhaps build bridges that others had not.

I recognize now that the challenge is bigger than I estimated, even with so many dedicated, smart, and caring people on both sides of the argument.

Resolving salmon declines is a complicated and challenging task. Salmon cross many dynamic ecosystems, oceans and rivers are constantly in flux, and salmon are continuously forced to adapt and evolve.

For scientists, it’s impossible to control for all real-world variations, so we’re often left with assumption-laden models and anecdotes instead of evidence.

Consequently, hydroelectric supporters and dam breaching advocates both point to science to support their claims, but the picture is often incomplete.

We know the stakes are high, which makes compromise so difficult.

Climate Crisis – Governor Jay Inslee described climate change as the “existential threat of our time.” It’s just as serious for salmon. NOAA Fisheries researcher Lisa Crozier has noted, “an almost synchronous decline” in worldwide salmon populations due to climate change. Given this context, removing carbon-free hydroelectric dams is a mistake.

Clean Energy Future – Hydroelectric dams provide roughly 80% of the region’s carbon-free electricity. They also help us safely add new intermittent renewables–like wind and solar–to the grid by filling in the gaps left by wind and sunshine. We need the lower Snake River dams to achieve our clean energy goals.

Regional Blackouts – With thousands of megawatts of coal generation being shuttered, regional utility leaders have warned that the Northwest already faces a serious risk of blackouts. Without the dams, the threat would be amplified.

Energy Equity – Vulnerable communities rely on the lower Snake River dams for affordable, clean energy. Without these dams, many people who can least afford it will face rising power bills, increased pollution, the specter of blackouts, and the loss of an important economic base.

If the dams remain, others fear for Snake River salmon and Southern Resident orcas.

Salmon Extinction – No one knows how long endangered salmon populations can survive before extinction. Given this lack of certainty, we have to act boldly now.

Nothing Else Has Worked – Northwest utility customers have invested billions in fish and wildlife programs to offset potential harm from dams. While in-river salmon survival has notably improved, too few adult salmon are returning from the ocean. Dam breaching is one of the only things we haven’t tried.

Cultural Significance – Tribal leaders fear the permanent loss of their cultural heritage and identities, should salmon not return in healthy numbers. Salmon are crucial to tribal health, economies, and religions, and the loss of salmon violates treaty rights.

While I haven’t yet seen a clear solution to these challenges, I have no regrets about the miles traveled or the new approach my organization has taken.

My work has given me the opportunity to meet some amazing people who’ve helped me better understand their perspectives.

Knowing that a problem is complex is far better than oversimplifying itl. If we can elevate the entire Northwest’s understanding of the issues, then I’ll feel like I’ve done my job.