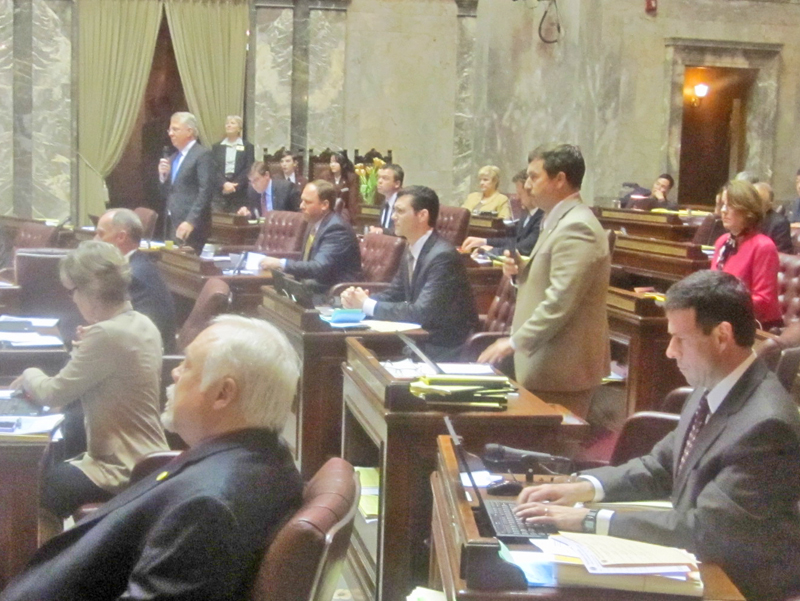 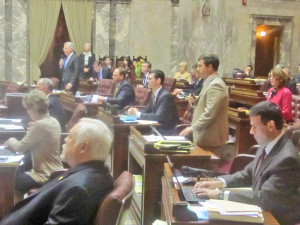 OLYMPIA, April 17.—Talk about fizzles! A much-anticipated attempt by the Senate Democratic Caucus to wrest control of the Senate floor lasted all of six minutes Tuesday. And you might say that an effort to score a point about political power – that it isn’t nice to squelch good bills – was trumped by a more important point about political civility. That it isn’t nice to take advantage when a member is sidelined by a life-threatening illness.

In the end, the attempt by Democrats to take control of the Senate from a Republican-leaning majority coalition was thwarted with little fuss. One Democrat voted with the other team, honoring a longstanding Senate tradition that one doesn’t try to score because an individual member is absent for reasons for ill health. Sen. Jim Hargrove, D-Hoquiam, cast a vote for Sen. Mike Carrell, R-Lakewood, who is being treated for a pre-leukemic condition. Thus the motion failed 23-25. Then the Senate moved on to other business as if nothing had happened – as in fact, was the case.

So ended a fight that has been touted as one of the major scraps of this year’s session. The motion, known as the “9th Order of Business,” would have allowed a simple majority of senators to decide any issue from the Senate floor. Senate Democrats said they wanted to force a floor vote on a pair of bills the majority coalition has kept bottled up in committee – one of them requiring health insurance companies to cover abortion, the other requiring the state to provide publicly funded college financial aid to the children of illegal aliens. Both bills would have had the votes to pass had they come before the full Senate, said Senate Democratic Leader Ed Murray, and he complained that a rigid and unyielding conservative coalition refused to let them through. “Let’s have democracy on the floor of the Senate,” he said.

Oh, poppycock, said Senate Majority Leader Rodney Tom, D-Medina, one of two Democrats this year who bolted from the Democratic Caucus to join with Republicans this year and form what they call the Majority Coalition Caucus. It was about power and control, he said. And if the Democrats couldn’t find members on the other team to vote with them, then they shouldn’t be complaining. Bills with majority support certainly were squelched often enough when the Senate Democratic Caucus was in charge. “I’ve been frustrated for years,” he said. He said it helps explain why he and Sen. Tim Sheldon, D-Potlatch, formed the new team in the first place.

Probably Would Have Passed 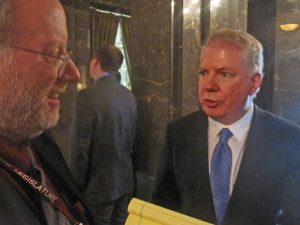 The fact that Senate Democrats went public with their plans beforehand, rather than simply going ahead and forcing the vote, underscored the fact that they never had the votes for the procedural motion, and that the main gain was in publicity value.

Yet odds are Murray was right – the two bills would have passed the Senate if they had come to the floor. House Bill 1044, the so-called “reproductive parity act,” is a top priority for abortion groups and it had the support of at least 25 members, including Tom himself – they had signed a letter of support early in the session. Meanwhile the illegal-alien financial aid measure, HB 1817, touted by supporters as a state-level version of the federal Dream Act, passed by a wide margin last month in the House, 77-20. Both bills have been held up because there are sharp disagreements within the Majority Caucus – they might be called coalition-busters. Murray said that shouldn’t matter. “The people behind this coalition said that this would be a new day in Olympia, but instead we have a far more rigid situation,” he said.

On the other hand, Tom was right as well. The majority party always decides which bills are considered. It is the way of Olympia. The all-important procedural decisions about agendas and floor calendars are never determined by a small-D democratic vote of all members. Certainly Murray’s team operated that way in the past, and majority Democrats continue to operate that way in the House at present. Rough treatment by the majority is a complaint that has been uttered time and again by members of minority-party caucuses, for as long as any present reporter, staffer, lobbyist or member can recall.

Tom said half-mockingly that he would be delighted to consider majority rule in the Senate on procedural matters whenever the state House of Representatives relaxes its discipline and does the same. “Let’s have that conversation,” he said. But he added that he doesn’t remember the House Democrats offering to do that at any time during the decade that he has been in the Legislature. 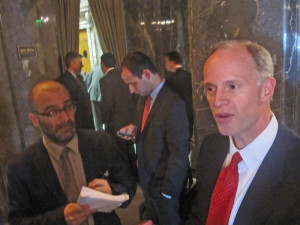 You might say there was another tradition at stake, though – a rather more compelling moral tradition that appears to have grown up in the Washington state Legislature over the last 20 years. Ever since a pair of particularly appalling cases back in the 1990s, members of opposing parties have been offering their votes in place of ailing members. The tradition, a counterbalance to the fierce partisanship one often sees in the Legislature, comes into play when the party split in the Legislature is close and a single vote can make a difference. By offering his vote in the place of the ailing Carrell, Hargrove ensured that his team garnered no advantage from a member’s absence due to illness. But he also ensured that his team lost the vote. Had it come down to a 24-24 tie, it would have been decided by Lt. Gov. Brad Owen, a Democrat.

Murray said he didn’t consider it a matter of taking advantage. He said the Democrats would have gone to a 9th Order strategy even if Carrell had been present. He said the point was that he was looking for votes from the other side, and he didn’t get them, thus demonstrating that members of the Majority Coalition Caucus didn’t have the conviction to vote for the two bills over the interests of their team.

But whatever the explanation, the fact was that there was a tie created by Carrell’s absence, and the Democratic Caucus took advantage of the moment. Because no member of the majority coalition had expressed interest in breaking ranks, it was clear that the best the Democrats could muster was a 24-24 vote. Therefore Hargrove’s decision to cast a ballot for Carrell spared Owen the necessity of casting a tiebreaking vote — something that might have proven a difficult choice for the lieutenant governor. The affair had some Republicans saying privately that Hargrove had behaved as a statesman.

There are still a handful of players around the statehouse who can recall the events that led lawmakers to declare years ago that lawmakers should never take advantage of a member’s illness. In 1994, as majority House Democrats debated a youth violence bill, the vote count was so close that Democratic House Speaker Brian Ebersole issued a “call of the House” and began ushering reluctant members of his own party into the back room for armtwisting sessions. There were seven or eight Democratic votes thought to be in play that evening, and Washington State Wire recalls seeing at least one member emerge from Ebersole’s office in tears. Others left the office sputtering with rage. At least two of them declared at session’s end that they would not run again. The “call of the House” motion meant that all members had to be present in the chamber and could not leave, and the State Patrol was dispatched to Longview to pick up the ailing Mike Riley, who was on his deathbed due to a brain tumor. Riley was wheeled into the House on a gurney, and as the roll call was called, he weakly stated “aye.” It is a matter of legislative legend that Riley suffered a seizure on the floor and it shortened his life – he died shortly afterward. Recollections appear to differ on whether Republicans offered to provide a vote for Riley — a Jacobsen newsletter from 2004 says they did not; a lobbyist present on the occasion says they did. Thus each party has been able to blame the other. But the bottom-line fact is that the Democrats didn’t need Riley’s vote and they could have left him at home. The measure passed 51-43.

The following year in the Senate, Democrats had a one-vote majority. And as state Sen. Cal Anderson, D-Seattle, lay dying of AIDS he found himself frequently called back to Olympia to cast votes in support of his party. His appearance that session was a shock to all who knew him in previous years as one of the Legislature’s brightest and wittiest figures; in his final months Anderson was a haggard and stumbling husk who had trouble speaking coherently. Some votes he missed. The Seattle Times reported that in at least one case the Republicans took advantage of his absence to win a motion to amend a bill. At the time there were many who called it disgraceful.

Murray maintains turnabout is fair play. In fact he says he was visiting Anderson in the hospital the day the Republicans took over the floor — and Washington State Wire was able to find a news story to confirm it. “I think it is unfortunate in 1995 there wasn’t a Republican willing to give a vote for somebody who was in the hospital,” Murray said.

The recollection had some people shaking their heads. “Ed Murray is making an argument based on something that happened here in 1995 and saying we should be held accountable for that today,” said state Sen. Michael Baumgartner, R-Spokane. “Well, in 1995 I was in high school, and that sounds like the same sort of logic I heard in high school.”

Indeed, it was because of the Riley and Anderson cases that a more sportsmanlike tradition has reigned in the state Senate over the last decade. When the majority Senate Republicans were down a vote because state Sen. Jim West was being treated for cancer a decade ago, Sen. Ken Jacobsen, D-Seattle, offered his vote in West’s stead. There have been other cases where a tie vote is at stake and a vote is offered. In many cases the offer to cast such a vote is just as significant as the vote itself, because it relieves pressure on the chamber. Jacobsen argued that a minority should never take advantage of a member’s illness for short-term gain, and he even sponsored a rule change in the Senate in 2004 that offered a specific description of the procedure: These days they call it ‘the Jacobsen rule.’  “To make gains in the face of a family tragedy is not the way I want to do it,” Jacobsen said in his floor speech on Feb. 12, 2004. “And if nothing else, I just suggest a bit of human kindness and I hope you all can do it.”

Then-Senate Majority Leader Bill Finkbeiner, R-Kirkland, gave a speech of his own that day, recalling the Riley case and saying he hoped such a thing would never have to happen again. “It is important that we remember that we have lives outside of here,” he said.