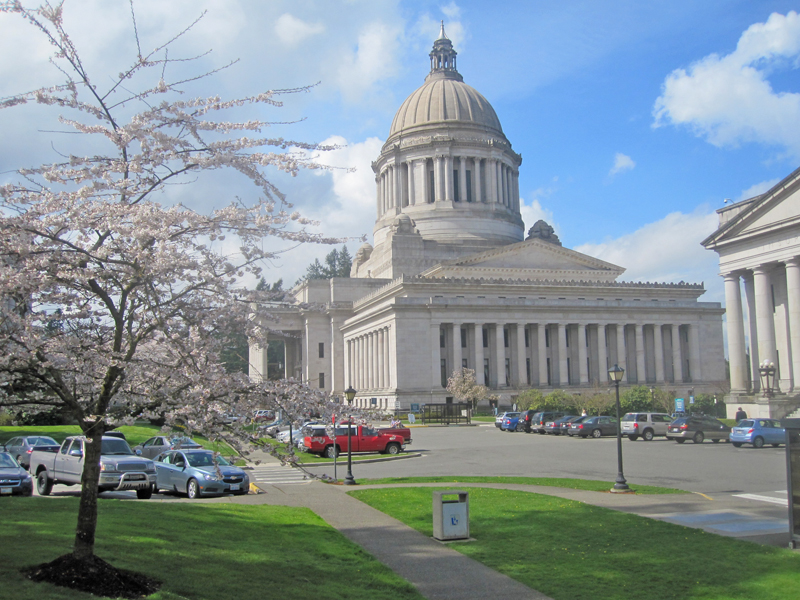 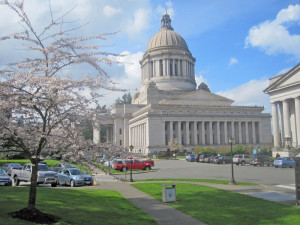 Springtime in Olympia — a lovely time to loll about on the grass and smell the dandelions. Certainly there won’t be a lot of work going on.

OLYMPIA, May 13.—Washington lawmakers return today for what certainly will not be an action-packed special legislative session. Actually, the big question is whether anything at all will get done in the next 30 days, because it might be to the Legislature’s advantage to sit on its hands.

A new tax-revenue forecast is due June 18. That’s a full week after the current special session is scheduled to end on June 11. Since tax collections appear to be on the increase, lawmakers have millions of reasons to loll about on the grass, smell the dandelions, and appreciate that splendid springtime sunshine in the state’s capital city. If they manage to stretch things into a second special session, they could wind up with more money to spend. Meaning it makes sense for them to delay solving the year’s central problem, which is finding $1 billion or so to pay for a Supreme Court decision requiring new spending for K-12 schools. The real deadline is June 30. Lawmakers must pass a budget by midnight on that date or the world of state government might come to an end.

The end of the fiscal year is really the only thing really driving the session. Lawmakers adjourned April 28 with their most important job undone, the passage of a budget. And if there was any momentum toward finishing, Gov. Jay Inslee let the steam out of the boiler when he sent lawmakers home for two weeks. There is a full slate of policy bills that remain under debate. Some are advocated by the Democratic governor, some by the Republican-leaning Senate. But most lawmakers expect those decisions to be part of the end-of-session dealmaking known as the endgame. Until the deal finally comes, there is precious little for them to do.

A rather telling point: Lawmakers kick off their session today with “pro-forma” ceremonies. Attendance is optional. 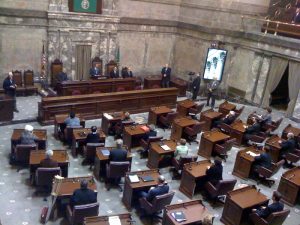 Your Washington state Senate in action. In this file photo, nearly every seat is filled. It will be a while before we see that again.

Gov. Jay Inslee told reporters last week that he expects lawmakers to “put the pedal to the metal” in the special session, but a look at the legislative schedule for the next few days shows little that would even provide an excuse for lawmakers to visit the Capitol. The House has nothing on its schedule — literally nothing. The Senate has scheduled a few work-session hearings this week, essentially background briefings for committee members. The most notable one is a hearing on drunk-driving legislation, an issue only recently taken up by Gov. Inslee, who has declared it to be one of the top priorities of the year. A bipartisan working group is working out a proposal that would make current drunk driving penalties more draconian, both for those who are convicted of the crime and those who are merely accused.

Senate Republican Leader Mark Schoesler, R-Ritzville, said he has told Judiciary Chairman Mike Padden, R-Spokane, not to rush things, but rather to get it right. But he said it is possible that a deal might be struck and the issue might help fill the time. The fact that the revenue forecast is scheduled after the end of the special session doesn’t necessarily mean lawmakers will take more than 30 days. “It’s not a mandatory wait and see,” he said. Lawmakers could always pass a budget and then allow themselves to be pleasantly surprised. Schoesler also noted that he is a farmer, and that makes him an optimist by trade.

Meanwhile, House and Senate teams delegated to negotiate the budget have little to show thus far. In meetings over the interim they basically discovered where they disagree, said Senate Majority Leader Rodney Tom, D-Medina. The House questions some of the assumptions in the budget written by the Senate Majority Coalition – requiring part-time state workers to obtain their health insurance through the state Health Exchange, for example. And the Senate points out that the House budget is out of whack from the start, because doesn’t provide enough in new tax revenue to pay for all the programs it authorizes.

Tom noted that the Senate version of the budget was written with input from members of both parties and passed with a bipartisan vote of 30-19, while the House version was written by Democrats alone. “Obviously there is a big difference between the two budgets, and I think a lot of times in these negotiations, people say let’s cut the baby in half. But from the Senate’s position, we have already cut the baby in half – there were 21 Republicans and nine Democrats. If [House Speaker] Frank [Chopp] wants to get that kind of budget out of the House and see where it lands, then we’ll split it in half, but we’ve already done a lot of compromising on our own, and they haven’t. So to expect us to do a 50-50, I don’t think is the direction.”

Just before the end of the regular session, Inslee signaled that he plans to play a more aggressive role in steering the course of lawmaking. He scored few legislative successes during his first 102 days, but Inslee said he will demand action on abortion, gun control and a number of other issues that generated little enthusiasm in the Senate. Meanwhile, the Senate, controlled by a coalition of 23 Republicans and two Democrats, has an agenda of its own, including education reform, workers’ comp reform and a final decision on Washington’s never-implemented family leave insurance program.

Inslee has the veto pen; the House Democrats give him the muscle. “I think the governor has stepped up to the plate and made it super-clear that some of the tricks of the trade that the Senate is inclined to employ are not going to work,” said House Revenue Chairman Reuven Carlyle, D-Seattle. “He has given them a friendly reminder that it is 50, 25 and one.” That’s a reference to the number of votes required from the House, Senate and governor.

“It is not 25 and go home, and the governor has a [veto] pen, and they are going to have to remember that. And getting 50 votes in the House and 25 in the Senate requires cooperation. I’m not willing to give up my belief that we will come to a deal and that we will reach consensus.”

And Carlyle adds that if it becomes a game of holding one’s breath, Speaker Chopp can hold his breath longer than anyone. “I remind them, Frank Chopp has no lungs.”