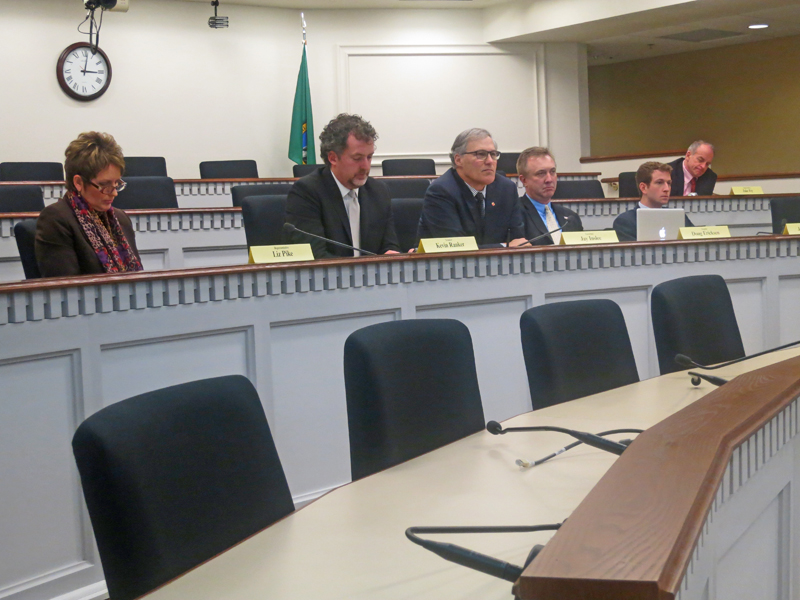 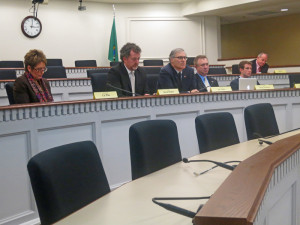 OLYMPIA, Dec. 19.—A state climate-change task force canceled its decisive meeting Wednesday – and with it appears to have gone any chance that next year’s Legislature will be dealing with big, sweeping policies that aim to reduce greenhouse-gas pollution.

But the cancellation appears merely to have put off a showdown that was coming over policies Democrats call past-due and Republicans call half-baked. Lawmakers of both flavors tell Washington State Wire they want to keep meeting. That means the issue still could come before the 2015 Legislature – and lawmakers a year from now could find themselves debating big-picture policies that would have dramatic effects on the state economy. Among other things, lawmakers are contemplating low-carbon fuel standards, which consultants say could raise the cost of gas by a dollar a gallon, or a cap-and-trade plan that might cost as many as 80,000 jobs.

“We have enough unanswered questions about what the program would look like that we need to continue [meeting] in order to have an actual proposal on the table,” said Joe Fitzgibbon, D-Des Moines, who is representing the House Democratic Caucus on the Climate Legislative and Executive Workgroup. “It doesn’t sound to anyone in the workgroup that we will be ready by 2014, so we will continue to work on the program for consideration by a future Legislature.”

The five-member committee, no doubt the most-closely-watched in Olympia over the last summer and fall, was the brainchild of green-minded Gov. Jay Inslee, who has made climate-change legislation one of his top priorities. The panel was supposed to vote on recommendations Wednesday on climate-change policies that would go before lawmakers in their 2014 session. But it was also supposed to come up with a fully-fleshed-out cost-benefit analysis that would put a price-tag on the effort, and provide a bit of heft for the inevitable argument in the Legislature. Participants concede they weren’t anywhere close – proposals were in the back-of-the-envelope stage. And they couldn’t begin thinking about costs unless there was a specific proposal on the table.

Under what lawmakers were calling a “conceptual agreement” that was reached during a conference call Wednesday, the governor’s office may be charged with coming up with a program, and one or more consulting firms may be directed to study economic impacts. “Apparently it was a good call,” said Inslee spokesman David Postman. “They agreed to keep talking.”

Recommendation Will be to Continue 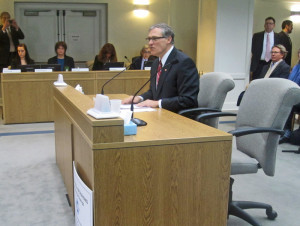 Inslee makes pitch for climate-change task force during a Senate hearing in January.

It is one of the most insider-ish tales of the Legislature, but it is the sort of policy-making process that could have big effects on anyone who drives a car or pays an electric bill.  Though the climate-change push has been cheered by environmental groups, it has thrown a chill into business and utility associations that warn the state’s big advantage of low-cost hydropower might be eroded. Hearing rooms were packed whenever the committee met.

The backstory is that the Legislature in 2008 passed a bill that imposed an ambitious goal on the state. By 2020, Washington was supposed to reduce its “carbon footprint” to 1990 levels. By 2035, it was supposed to reduce output by 25 percent and by 2050 emissions were supposed to be cut in half. The bill was a consolation prize for then-Gov. Christine Gregoire, who could not convince her fellow Democrats, then in control of the Legislature, to pass a sweeping cap-and-trade plan like that approved in California in 2007.

The goals didn’t do much – they contained no teeth. And all talk of doing anything went out the window a few months later when the national economy tanked and gave lawmakers a rather bigger problem to deal with. This year, newly elected Gov. Inslee approached the Legislature with his plan for a climate-change task force; he called global warming the biggest problem of modern times and he argued that the state would miss its targets in a big way. “Inaction is not an option,” he was fond of saying.

Inslee still hopes the state will follow California’s example; indeed, he signed an agreement with California, Oregon and British Columbia in October in which he pledged the state will enact cap-and-trade and low-carbon fuel standards. Under cap-and-trade, carbon-producing industries are assigned pollution-reduction targets, and businesses that fail to meet their goals can purchase “credits” from those that exceed them. Or they can subsidize fleet purchases of zero-emission vehicles, or achieve targets in other ways. The jury is still out on the California program — it launched last year but the most dramatic pollution-reduction targets have yet to kick in, and so far the market for credits has been thin. California also has enacted low-carbon fuel standards, though big problems have emerged with that policy; lawmakers here also have pondered a carbon tax, as has been enacted in British Columbia. 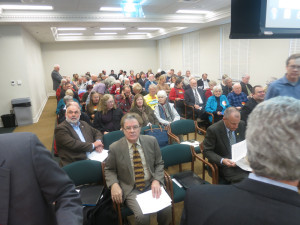 The room was packed last week as the climate workgroup held a public hearing. An overflow crowd watched from an adjacent hearing room.

Naturally there were plenty of skeptics, particularly among Republican ranks and in the Republican-leaning Majority Coalition Caucus in the Senate. Sounded like a good way to drive industry out of state, they said. But they agreed to create the task force, with the stipulation that the state perform a rigorous cost-benefit analysis to see what good climate-change legislation might do, and at what cost to the state economy. Such a program might encounter stiff resistance in the Legislature as long as the Majority Coalition Caucus holds sway in the Senate, but the information generated by the review would live on even if the coalition’s advantage is temporary.

“I think it is an important issue, it is not going away, and I think it is crucial that we provide the best data possible,” said state Sen. Doug Ericksen, R-Ferndale, who is representing the Senate Majority Coalition on the panel. “I think the economic data is going to show some pretty large impacts on Washington state from going it alone to achieve these arbitrary 2008 goals, and we have to address that. It is not only about cap and trade or about carbon – it is about what is in the best environmental interest of Washington state.”

It is worth noting any policy adopted by the state would likely have little impact on global warming – Washington generates about three-tenths of one percent of global greenhouse-gas emissions.

Heads Off a Breakdown

To most observers it was apparent that a breakdown was coming at this week’s meeting. Though the consulting firm hired by the state, the Science Applications International Corp., was able to come up with some general numbers, it was unable to produce any specific cost estimates for a Washington-based program because no one got around to presenting a specific proposal. Democrats were saying it was time to move; Republicans countered that nothing had been fully cooked. Because Inslee is not a voting member of the committee, the vote is evenly split.

The decision to defer action may be ratified at an as-yet-unscheduled meeting before the end of the year; the panel is required by law to issue a report to the Legislature by Dec. 31. The extra time means that whatever the panel comes up with will be studied and re-studied and a clear and concise cost-benefit analysis can be produced. Impacts on energy costs, positive and negative impacts on manufacturing and the expected reductions of CO2 emissions – all will be considered. Industry and environmental groups will be able to weigh in with analyses of their own.

Said Fitzgibbon, “The encouraging thing for me is that it sounds like there is an agreement that the next logical step in the process is to have a Washington-specific set of policies and evaluate it.” For now the panel is trying to come up with a list. Democrats have offered a five-point plan that includes cap and trade, a ban on utility purchases of out-of-state coal power, and policies to promote energy-efficiency building standards, and the use of clean energy, clean fuels and clean transportation. Republicans are interested in incentives for energy conservation, nuclear energy – and perhaps a reexamination of the 2008 goals.

“What I’m looking for is the same thing I was looking for on day one, when we passed the bill last session,” Ericksen said. “Which is solid blocks of economic and informational data that legislators can make informed decisions upon if these bills are brought up for a vote.”